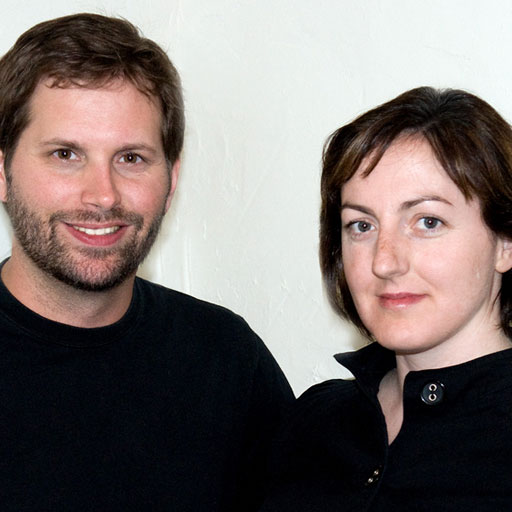 At designProVideo.com, we searched the world high and low to find the best Flash trainers out there, and I'm pleased to report we found them - Robert Reinhardt and Snow Dowd!

After discovering Flash while working on an art project, Robert soon realized that there was a need for more comprehensive documentation of its capabilities. In 1998, not many people had even heard of Flash and publishers were wary of the limited market, but IDG Books Worldwide, Inc. (now Wiley Publishing, Inc.) committed to doing the Flash 4 Bible. The rest, as they say, is history. After studying and working together in Toronto for five years, Robert Reinhardt and Snow Dowd established a multimedia consulting and design company in Los Angeles in 1999, called [the MAKERS]. Five years in the Hollywood Hills saw them through the dotcom boom and bust and gave them the chance to work on a wide range of projects — without ever having to wear wool socks. Now based in Portland, Oregon, [the MAKERS] LLC continues to do work for entertainment companies, educational institutions, entrepreneurs, independent artists, and nonprofit organizations — and enjoy wearing stylish rain boots.

Robert Reinhardt — With a degree in photographic arts, Robert takes a holistic approach to the creation of compelling multimedia. In addition to development and content creation through [the MAKERS], Robert works with Schematic as Vice President of the Multimedia Platforms Group. Robert has led various assignments including multimedia data analysis applications for Nielsen’s Media and Entertainment division and creating interactive applications for The Weather Channel’s WeatherClassroom.com, DC Comics, and Microsoft Windows XP Media Center Edition spotlights for major cable networks. When he isn’t building or consulting on Flash projects, Robert loves to teach and write about Flash. In addition to the Flash CS4 Bible (Wiley, 2007), he is the coauthor of Flash MX 2004 ActionScript Bible (Wiley, 2004), as well as the recently released Adobe Flash CS3 Professional Video Studio Techniques (Adobe Press, 2007). He has developed and taught Flash workshops for Lynda.com, Art Center College of Design, Portland State University, and Ed2Go, as well as conducted on-site training and seminars for clients in the United States and Canada such as LodgeNet, Wieden+Kennedy, and Scripps Networks. Robert has been a regular featured speaker at the Flashforward, FITC, Flashbelt, Flash on the Beach, and SIGGRAPH conferences. Robert and Snow were members of the Web Graphics committee for the SIGGRAPH 2004 conference. Robert is also a writing partner for CommunityMX.com.

Snow Dowd — Snow initially collaborated with Robert Reinhardt on multimedia, film, and photography-based installation projects while earning a BFA in Image Arts and New Media at Ryerson University. During this time, she was also the production manager for Design Archive, one of Canada’s preeminent architectural photography studios. Working with renowned photographers and an exacting international client base of architects and designers helped her gain a deeper appreciation for images, architecture, and industrial design. Fully immersed in digital production since 1998, Snow is able to synthesize her background in visual arts and communication theory with an ever-evolving software toolkit. Focusing on content architecture and interface design, Snow strives to create print and Web projects that are beautiful, functional, and memorable. Snow was honored to be featured in the June 2005 spotlight on FlashGoddess.com — a great place to go if you’ve been wondering where all the women are in the Flash world.
Courses by Robert Reinhardt & Snow Dowd
Reviews
Feedback
How are we doing?
We'd love your thoughts, feedback and questions regarding our new site. All feedback is appreciated!
We do not respond to this form! If you need support, please visit our support page.
Thank you for your input!
Your message has been successfully sent
Course Advisor
Don't Know Where To Start?
Ask A Course Advisor