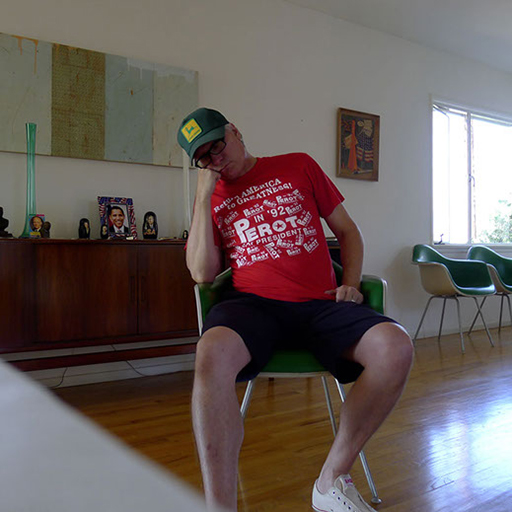 Barminski works in a variety of mediums including painting, sculpture, animation, music, video and teaches digital media at UCLA.
Bill Barminski
His first notoriety came in the early 1980’s as the creator of  The Fascist Gun in the West, a satirical comic book Greil Marcus linked to the Situationist International movement in a 1986 essay for Artforum. Barminski started showing his paintings in the mid 1980’s  and has had over 20 solo exhibits at various galleries in Los Angeles and NYC.  He continues to create and exhibit work although much of his current work is mixed media and sculpture made from his favorite material, cardboard.

Starting in the early 1990’s Barminski began exploring the possibilities of digital media and video. in 1999 he collaborated with director Baz Lurhman to create the music video for the Sunscreen Song. In 2007 Barminski teamed up with Chris Louie to form a creative company called Walter Robot. In 2009 their work was included at the Sundance Film Festival and has won several awards including Best Music Video Los Angeles Film Festival 2009.  Collaborations with musical artists include: Death Cab For Cutie, Gnarls Barkley, Hodgy Beats, Ben Lovett, Kid Cudi, People in Planes, Rob Thomas and others.

Other projects include one of the most expensive Absolut Artist billboards created, restaurant identity design and Billboard designs for AHA. We are pleased to have Bill as a digital media instructor.
Courses by Bill Barminski
Reviews
Feedback
How are we doing?
We'd love your thoughts, feedback and questions regarding our new site. All feedback is appreciated!
We do not respond to this form! If you need support, please visit our support page.
Thank you for your input!
Your message has been successfully sent
Course Advisor
Don't Know Where To Start?
Ask A Course Advisor