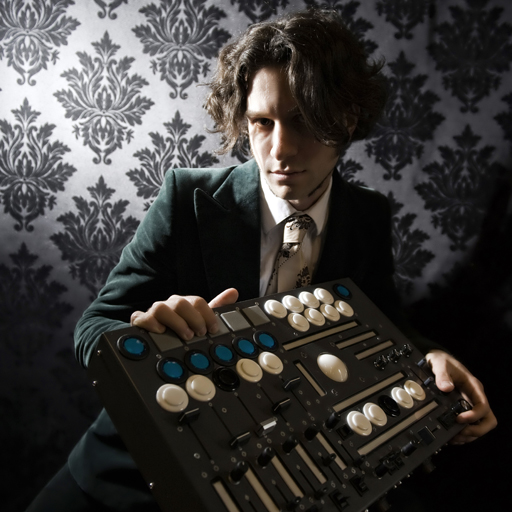 Hailed by more than million YouTube viewers as "The Godfather of Controllerism", Moldover is a new breed of musical icon that combines rockstar charisma with the mad genius of a basement inventor.
Matt Moldover
Moldover's success as a producer and performer is built upon his founding and developing the precepts of controllerism.

The musical instruments he creates (and markets) are legendary. His multi-player music jamming station "The Octamasher" tours to music festivals, college campuses and private parties, putting controllerism into the hands of everyone. His commercially available performance controller, "The Mojo" combines elements of traditional instruments, DJ hardware and video game controllers, offering unparalleled ergonomic tactility to other serious controllerists. Next on the horizon is a new multiplayer instrument\ called "The SyncoMasher" and a Do-It-Yourself version of Moldover's hacked up performance monster: "The Frankentroller".

He tours and performs his original compositions widely across the US and Europe. He also produces and promotes his own albums. MOLDOVER is dedicated to education and leads Sound Control seminars around the world. He’s truly an emissary, scratch that... ahh, the king of the DIY craze that is threatening the very notion of what a MIDI controller is and could be.

We are thrilled and honored to have (Matt) MOLDOVER as a member of our talented faculty of dedicated authors and trainers!
Courses by Matt Moldover
Reviews
Feedback
How are we doing?
We'd love your thoughts, feedback and questions regarding our new site. All feedback is appreciated!
We do not respond to this form! If you need support, please visit our support page.
Thank you for your input!
Your message has been successfully sent
Course Advisor
Don't Know Where To Start?
Ask A Course Advisor