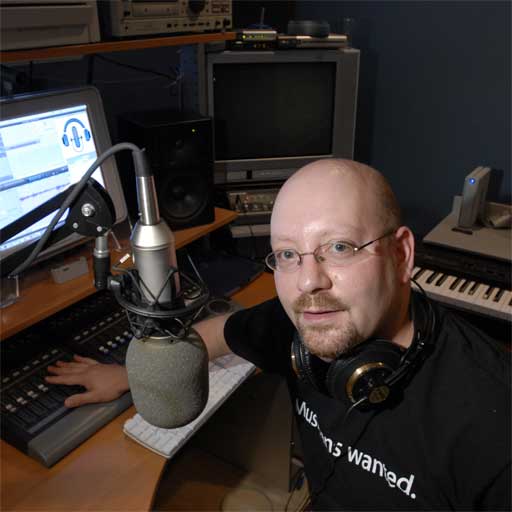 Paul is a master of Propellerhead Reason, with over four years of experience teaching the app. He is also a traveling presenter with Apple, teaching and demoing GarageBand and Logic to audiences across North America.
Paul Garay
By Martin Sitter

I first met Paul when I was teaching at the Vancouver Film School. Paul quickly became one of my best friends at the school, and when I started macProVideo.com, he was the first person I asked to contribute training to the site. Knowing his expertise teaching the program, I asked him to do Propellerhead Reason. It took over a year for me to finally convince him to come on board, but he's here now ... and I couldn't be more pleased!

Paul is a true musician. He started playing piano at the age of 4, and began performing in bands while attending high school. Shortly after school, he went on to tour professionally with several different recording acts across North America playing keyboards and singing.

In 1994, Paul decided to open his own studio and spent the next 6 years focusing on music production and digital audio recording. His production credits include work with a virtual who's who of west coast Canadian recording talent.

In 2000, Paul began instructing courses at the Vancouver Film School and was introduced to scoring for visual media. In particular, in 2004, Paul had some of his music appear in the television series �Smallville".

You can also catch Paul at his web site, Inside home Recording, where you can pick up lots of hard won tips and tricks about recording in a typical home project studio.
Courses by Paul Garay
Reviews
Feedback
How are we doing?
We'd love your thoughts, feedback and questions regarding our new site. All feedback is appreciated!
We do not respond to this form! If you need support, please visit our support page.
Thank you for your input!
Your message has been successfully sent
Course Advisor
Don't Know Where To Start?
Ask A Course Advisor