In recent years, sidechain compression has grown from surgical mix tool to genre-defining dynamic effect. The widespread appeal likely has something to do with the interaction between different elements in a composition, as determined by the sidechain assignment. As conventionally deployed however, this effect only takes place in the amplitude domain, pulling the volume of one sound down according to the input of another.

What if we could create similar interactions between different elements in a mix, influenced by incoming audio on one track, but able to control any parameter, such as filter cutoff or delay time, instead of just volume? Luckily for us, Live 10’s Envelope Follower Max for Live Audio Effect can do just that.

First, navigate to the Max Audio Effect section of the Max for Live Browser and grab the top Envelope Follower option; the latest version is what we’ll be working with here. Be sure to add it to the track generating the impulse you want to be followed; in this case I’ll put it specifically on the kick drum pad of a Drum Rack so as to only be triggered by the kick.

Envelope Follower in the browser; feel free to add it to a Collection for easier retrieval in the future

I’ve got a simple breakbeat programmed into a MIDI Clip on the Drum Rack track, and a sustained chord on a second track featuring Wavetable, which I’ll be controlling with the Envelope Follower. First let’s take a look at fine tuning the modulator before we assign it.

Envelope Follower on a DS Kick instance, directly on the Drum Rack Pad.

Three controls govern the shape of the Envelope Follower. Gain strengthens or reduces the signal input, exaggerating the resulting envelope as needed. Rise softens the attack, but in doing so tends to reduce the peak value. Fall softens and extends the decay slope, effectively elongating the resulting envelope. You can adjust both in combination as needed. Finally, the entire envelope shape can be delayed from the initial input, either in milliseconds, or perhaps more usefully, in note intervals.

Classic sidechain effects tend to be offset by around an eighth-note or so, and that’s what I’ll set it to here. I’ll soften the Rise and the Fall to make it a bit more organic, but will need to increase the Gain to compensate. I’ve set all this up with an idea of how the results are likely to sound, but you may find it easier to adjust these settings by ear after you’ve assigned a target.

Now that I’m happy with my Envelope Follower settings, I’ll click the Map button at top left, above the waveform display. As it blinks, I’ll navigate to the Wavetable position slider for Oscillator 1 on my Wavetable to Map it for modulation.

I want to make things a bit more interesting, so I’ll click the Envelope Follower’s Multimap button at upper right: the box with three horizontal lines contained within. Now I can map up to seven other parameters to the same Envelope Follower, each with constrained ranges defined by the minimum and maximum percentage values to the right of the parameter mapped. Parameters can be easily unmapped by clicking the circled X next to their respective title rectangle; click the Multimap square, now with a single line through it, to return to the main view.

Now I’m going to map the wavetable position of Oscillator 2 on the same Wavetable instance to the second mapping, but I’ll invert the behavior by setting the minimum value to 100% and the maximum to 0%. I’ll assign the Envelope Follower to the panning of both oscillators, and invert those as well, which should create some nice stereo movement to go along with the wavetable motion.

Multimap mode with both wavetable oscillator positions and panning assigned and inverted for opposing motion.

There’s some nice movement starting to happen, interacting with the kick drum nicely – but I’d like to create something a bit more dynamic. So I’ve assigned Wavetable’s first LFO to its Filter 1 Frequency. Now I’ll use the Envelope Follower to control the LFO rate. At first the range is too wide, so I’ll have to constrain it to something more musically intelligible; a minimum value of 42% seems to work nicely.

A glimpse of Wavetable’s LFO and filter settings.

Envelope Follower on the snare drum.

I’ve now put an Operator on a third MIDI track, and I’ll assign the snare’s Envelope Follower to both the LFO Rate and the Spread, both with inverted ranges so as to intensify along with the snare’s initial spike, and mellow out as it decays.

To add a bit of space, I’ve put a Reverb on Return A, and sent a bit of the Operator to it. To make it a bit more dynamic, I’ll control the Reverb’s Decay Time and Room Size with the snare’s envelope.

Reverb parameters mapped along with Operator from the snare Envelope Follower.

Last but not least, I feel like the shaker pattern is a bit too static, so finally I’ll map the snare Envelope Follower to the shaker’s DS HH Decay parameter, and fine tune it by constraining the ranges until it sounds about right.

AUDIO 7: All together now.

We’ve barely scratched the surface of what Envelope Follower can do here, but I hope you can see the potential for dynamic interactions between any audio source and any parameter in your set. With just a bit of creativity, it create fluid connections between disparate elements – possibly even inspiring new styles in the process. 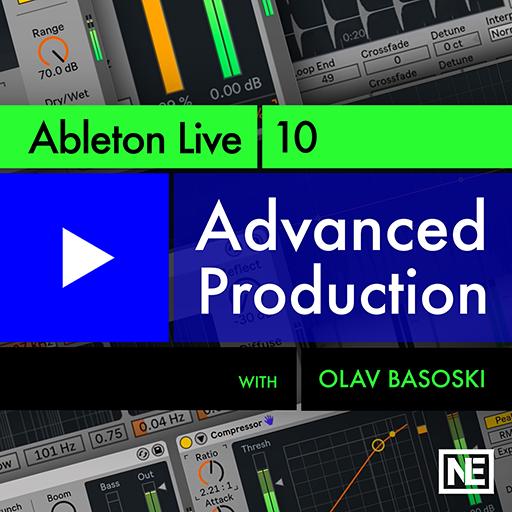