All Articles Ableton Live
Sampling Analog Synths in Parallel in Ableton Live
G.W. Childs IV on Wed, February 1st 1 comments
Language
Using different sampling techniques can make a world of difference when it comes to the end results. Find out why in this tutorial from G.W Childs...

There are of course many methods for sampling analog synths in a DAW for sound banks, sample libraries, sound libraries and more. However in this particular tutorial we’re going learn how to process an analog synth in parallel so that all our lows, highs and effects are sorted as we record in Ableton.

When I used to create sound libraries, sample packages and drum loops, I used to like to record the raw analog beats and sounds, process the sounds later with various effects and then master, level balance, and bundle everything up. These days I’ve found that I like to tweak my synths and observe how virtual effects will behave after the rude interruption of one of my analog synths. After all, most effects processors are technically synthesizers in their own right, merely using another input to act as an oscillator which will in turn travel down just as complicated of a signal path be it digital, analog, or virtual.

Processing in parallel using Ableton’s Sends and Returns turned out to be just what the doctor ordered for me, as the method has allowed me to hear and record, in real time, what my incoming signal sound like through not just one but several effects, each tasked with delivering different frequency ranges of what my final drum, effect, pluck, bass, or any other sample might have, side by side, as a whole new creation. Let me show you what I mean.

Set Up Your Signal...

There’s no rocket science to setting this up. In fact, it’s pretty intuitive if you’re used to working with multi-band compressors. We’re just turning Ableton itself into one.

Keep in mind this is just a workflow, not a rule of thumb! I’ll set up an audio track as normal in the Session view, and set the track to Monitor On. This ensures that I can hear what’s coming in, in realtime from my external source. In this case, a Vermona Mono Lancet ’15. 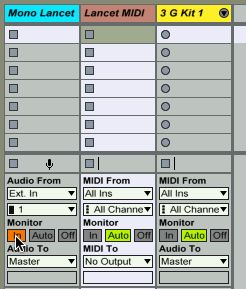 Now what I do next makes things seem a little weird. I’ll turn down the fader for my new Mono Lancet track, all the way down. Which seemingly of defeats the purpose of enabling realtime monitoring in the first place, and set the Sends to Pre instead of Post, so that the Sends tap the signal of my incoming track before the fader. In this case, placing my Send Pots in charge of amplitude as well as the return faders. 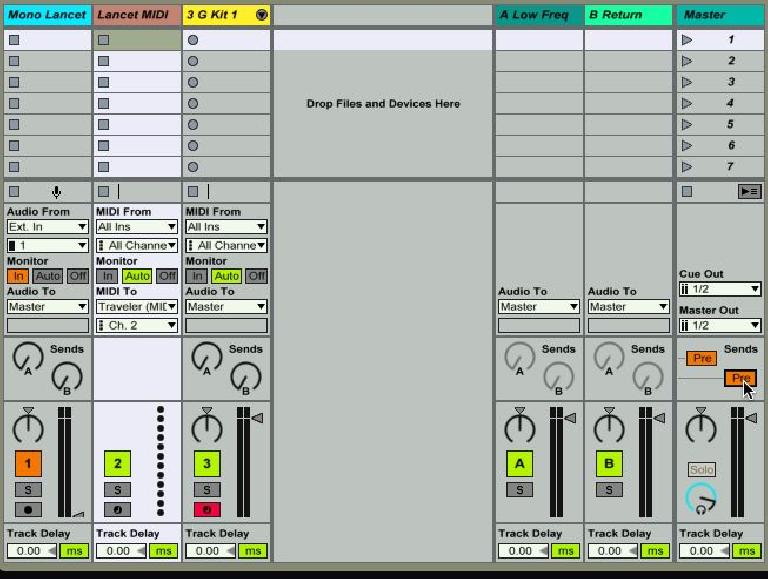 But I’ll turn up the sends, both A and B, a good 75% so that there’s a nice strong signal going to both the A and B Return tracks. Now we’re getting a doubled signal in realtime! And, that’s just what we want... 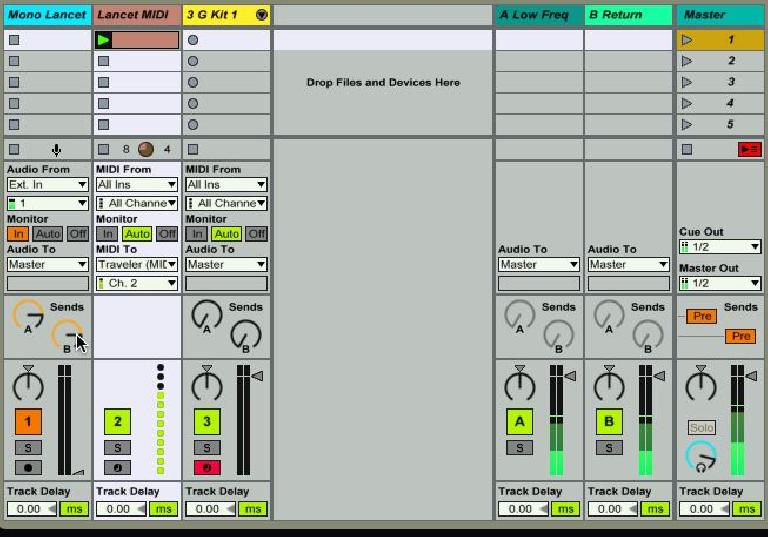 I’ll also set up a MIDI track (not shown) that will trigger my Mono Lancet, repeatedly, on the chosen key so that I don’t have to manually trigger it with a controller every time and can tweak my settings as I record.

Okay, this is where things get fun! I’ll re-label the A Return as Low Frequency, as this is going to be the return channel where I beef up the low end, and make things boom just a little bit more. 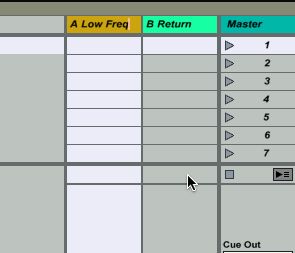 Now on my Low Freq channel, or LF, as I’ll refer to it from here on out, I’ll drop a compressor as well as a good old Auto Filter. I’ll use the compressor to pump up the low frequencies and I’ll use the filter to cut all the high frequencies, using one of the Low Pass filter settings so that I only low frequencies (as labeled) will be heard on this channel. 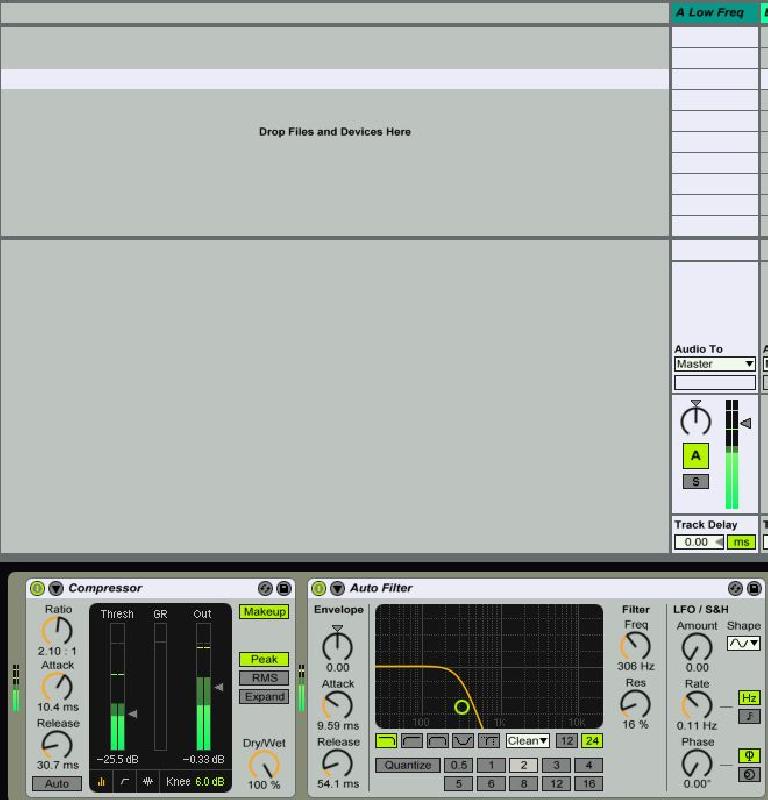 For the compressor settings (shown above), for the low frequencies, I generally will stick to a 2:1 compression setting as well as adding in just a little bit more Attack so that the low frequency signal isn’t as punchy if I’m trying to record a synthesized kick drum for example. The high frequency, later when it’s enabled, gets to handle the attack. The LF channel ends up handling that woof  that comes in a nano second later, similar to a real kick drum.

Sometimes I will place an Amp or another distortion device on my LF Channel as well to give the low end a little sizzle, rumble and just plain stand out a little more. Though when I do this, I usually will set the Mix of the Amp to about Halfway so that I get part of the unprocessed low-end. Or set up an entirely separate Return track that only handles distortion. Remember you can add as many return tracks as you like, in turn creating multiple layers and versions of your new sound that you can stack! 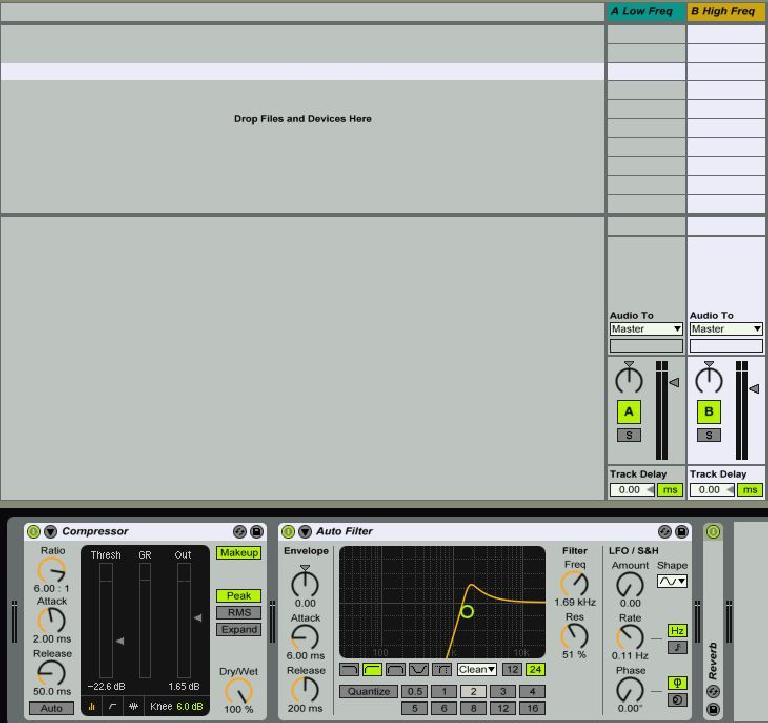 For the high frequency, or HF return I’ll add on a little bit more compression (usually somewhere between 4:1- 8:1) as it’s really easy to lose the high frequencies in a mix once things get going. And by pumping them up, things sound a little more crisp as well as giving the sound as a whole much more definition when it’s finally played back through a sampler, Simpler, or even within a totally different DAW.

In addition, for the High Frequency Channel I also tend to keep a Reverb around and a simple delay. The reverb I’ll enable when I’m working with sounds like bells, snares, or bass synth, or kicks that I’d like to diffuse a little bit. Or, just add a little bit of sheen to, on the top end. The delay I will use for a tiny bit of slapback on very low Dry/Wet settings, should I want something to seem a little more three dimensional.

Now we’ve got the Auxiliaries, or Sends and Returns working. But we need a way to finally mix down the channels and record what’s coming out. Remember you can’t group Return tracks! So to handle this, I’ll create a send return track. And then Activate the C Sends on the Returns themselves so that I can send the signals from the A  (LF) and B (HF) return tracks over to the C Return. 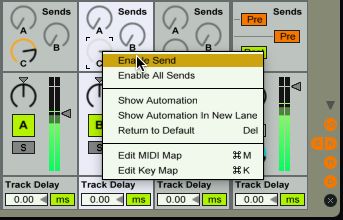 Finally, I’ll create a new audio track, set to Monitor, and set the C Returns out to the input of this new Track. This now allows me to record what both return tracks are doing in real time. Plus I can use the LF and HF faders to mix as I record and find the right balance and polish!

Alright, let’s hear some before and after to hear the difference. First, let’s start with a kick.

What about a bass pluck?

What about a snare?

As you can hear, the A and B samples are night and day. They are entirely different sounds! Are they necessarily better or worse? No! But, they are the sounds that I was was intending to make. Rather than getting halfway there, only to have to spend another entire session going back and doing the creative processing, balancing, and so on, by tracking/recording with plugins I’ve added another creative, constructive element that can take my sound designs all they way to where I want them to be, in one session, killing two birds with one stone.

Thanks for reading through to the end of this free tutorial. To help support the tips, reviews, news and interviews we create for free at AskAudio, we created The Academy - the largest pro online video course library for audio and music production. You can signup for just $15 a month and learn almost every audio software, hardware and technique under the sun in one place. Check out the AskAudio Academy here.
Related 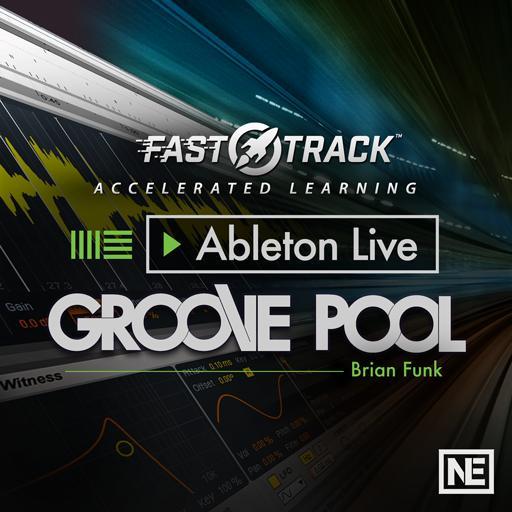