All Articles Ableton Live
Using Your Voice Instead Of A Synth As Lead Instrument In Ableton Live
G.W. Childs IV on Tue, March 7th 0 comments
Language
Why turn to a synth when a voice can do just as well, and sounds great? Here's how to achieve great results with a voice instead of a synth in Ableton Live.

The next time you’re looking for the perfect lead synth for a song, but can’t quite find one that cuts through, maybe it’s not a synth you need, but your own voice! Voice samples cut from small sections of voice have been the chosen oscillators for many a lead patch in the last several decades from Nu Shooz to Britney Spears. Why do producers use these small, crappy voice bits for lead instruments in hit tracks like Nu Shooz' “I Can’t Wait”? Let’s talk about why, and how!

There are some great reasons for considering a voice sample lead. First off, nothing cuts through a mix like a voice sample. Especially female voice samples. The typical female voice sits in a frequency range that soars above guitar, bass, synths and drums. And even if you’re working with a male voice, voice samples when pitched higher still cut through very well. Granted, normally you don’t want voice samples unnaturally pitched. But remember we’re using the voice as a pop instrument, it’s supposed to sound unnatural!

Secondly, it’s really easy to set up. Especially if you’re using Ableton, because voice samples can literally be dropped in to a sampler.

I often create a voice sample lead toward the end of a mix because I’ve already mixed the vocals down and have them sitting in a nice place between the drums, bass, pads, loops and whatever I have going. I can even group my sampled voice in with the regular voice tracks and have the sampler go through the same effects so that the lead really fits in there with the vocals. And that’s kind of part of the fun for me. I like to have the electronics blend in organically, so that it causes my listener to question what’s real! Let’s go through the steps!

In my Ableton Session, I’ll locate a segment of vocals that really pops to my ears. Something that is distinct and choppy enough that I could play it as a melodic part and spice things up after the verse. As I play back a mix I’ve been listening to for hours at a time already, I hone in on one particular segment that I think will work. 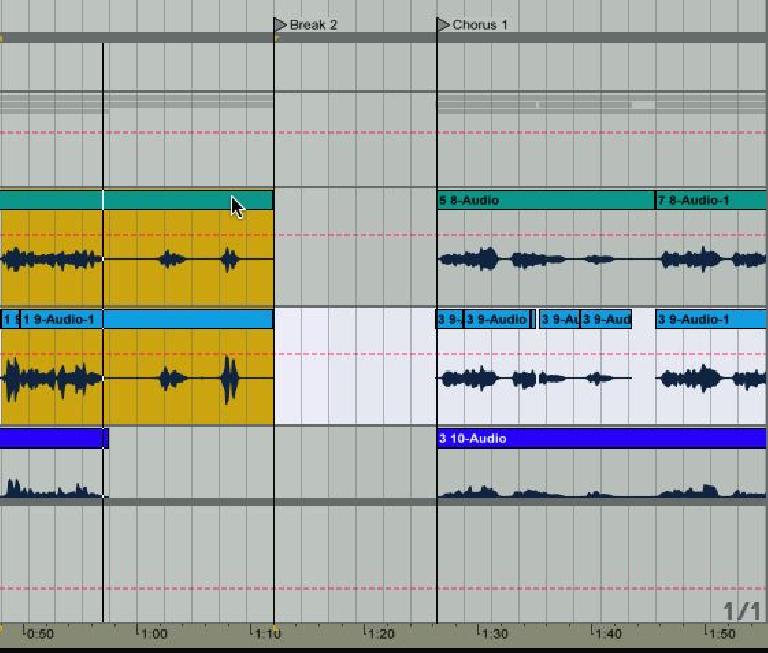 Of course I don’t want this whole section of audio, I only want the vocals. But in order to use the vocals melodically, I need a sampler. Using the Command+Shift+T shortcut I’ll create a MIDI track. Once the track is in, from the Live Browser I’ll drag a Simpler in to the newly created MIDI track. 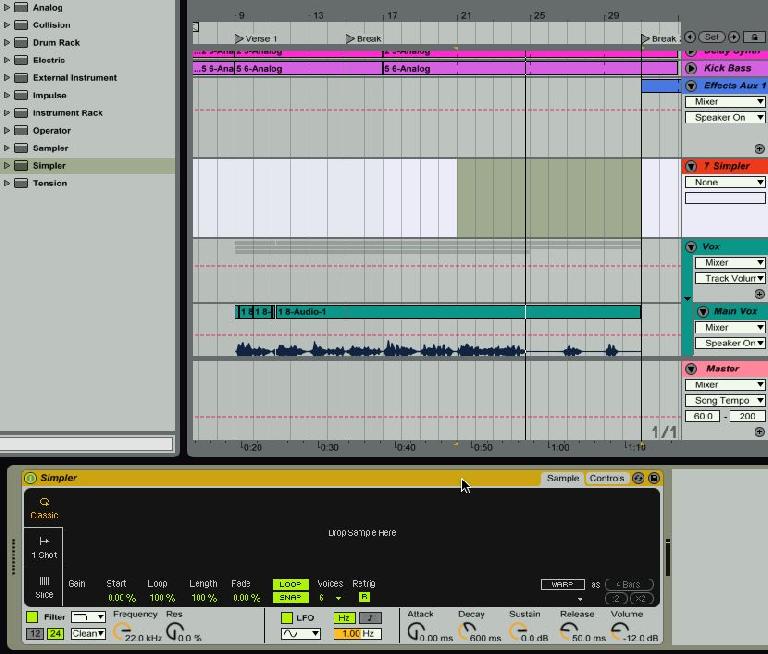 Then before I do anything else, and especially because this track is sitting in a big stack of vocals, I’ll label it *VOX Sampler* and change it to a very distinct color. This way I can find it later in a slew of tracks. 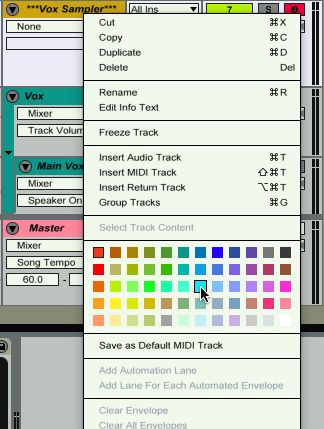 This is where things get fun! Remember, I want my vocal sample to sound like the vocals in the mix and not like the raw vocals, which sound very different dry. I want the compression and so on. As I mentioned above, I could put my Simpler track in the vocal group and share in the processing going on for several tracks in real time. Or I could just sample the output of the group. I’ll create an Audio Track, using the Control+T shortcut, and set its input to Resample. 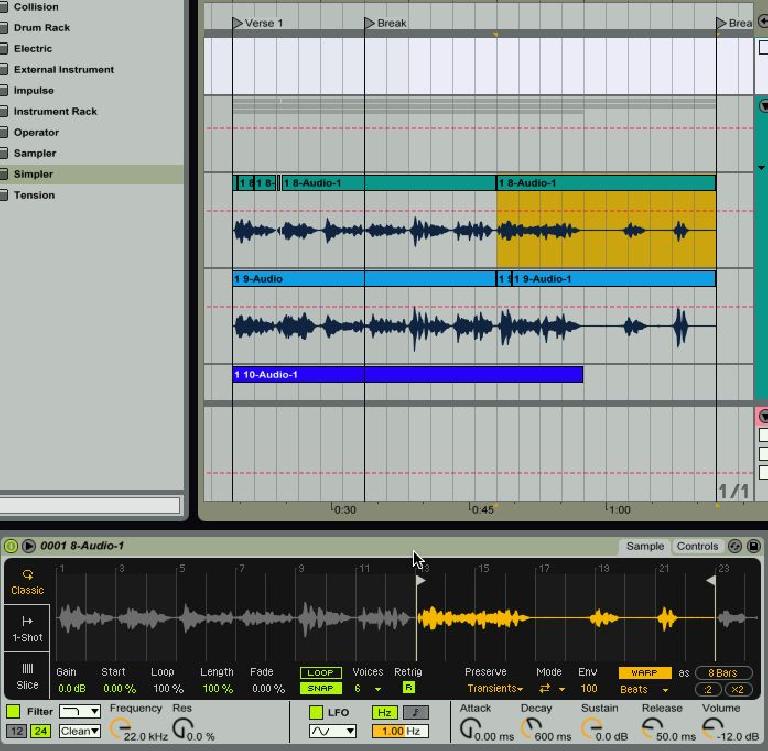 Now I’ll solo my vocal group and then record a clip on my Resample track of the segment of vocals I want for Simpler. 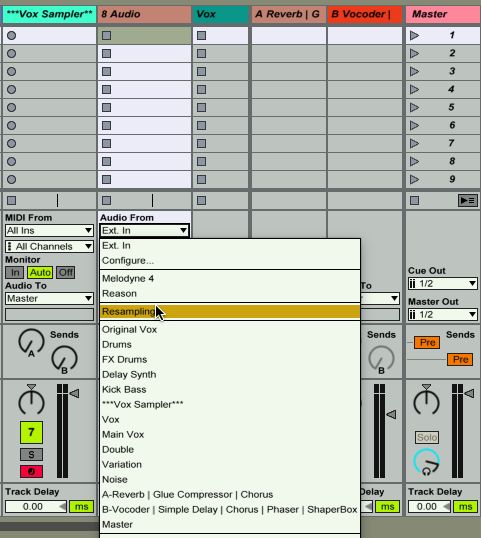 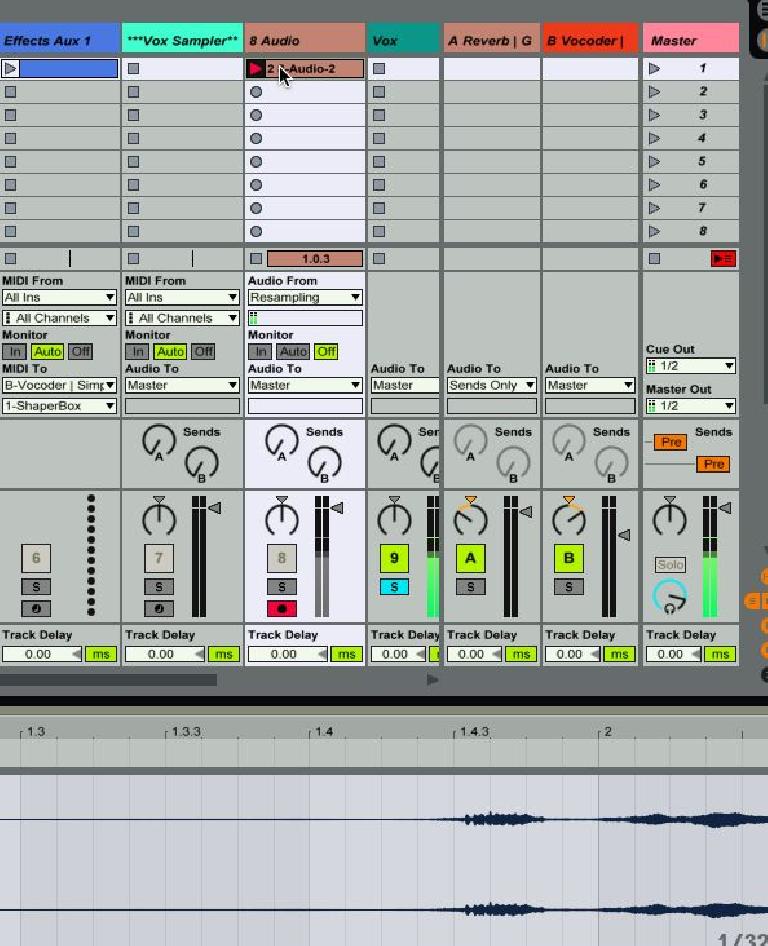 Once I’ve gotten the complete segment that I want recorded I’ll drag the clip on to Simpler in the Edit pane below. I now have a voice sample that matches the lead vocals with effects, EQ and so on. All I have to do is play! But there’s a little more to it, as you still want to dial in your lead, right? 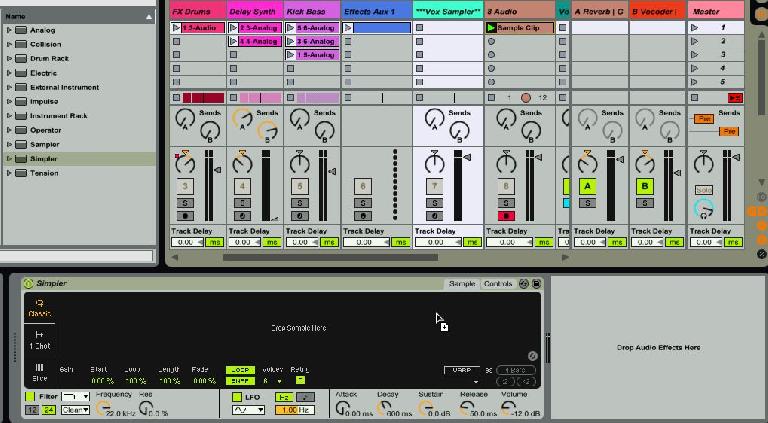 Now that I have the vocal segment that I desire for my sample, it’s important to dial in the envelope, filter and a few other little features for safe measure. But first things first! As I’m going to be using this patch as a lead, I’ll go ahead and disable the polyphony of Simpler. This ensures clumsy fingers won’t mess up my moment when I lay down some melody with this patch, as only one key at a time will work.

Then I’ll drag the start position of the sample over to a portion of the recording where I want the sampler to start when I press a key. I wind up choosing “Too”, within the vocals, as it’s easy to identify and cuts through.

To make the sample more playable however, I’ll lower the sustain all the way down. And raise the decay slightly so that the sample does not cut off so abruptly when I let up off of the keys.

I’ll also raise the volume of the patch within Simpler while playing the song, so that I can dial in the level and hear it clearly along with the vocals.

Once the patch feels good to play and sounds right, I’ll go ahead and lay down the sampled vocal melody in the area of the song where I think the vocals need backup, and the song might need a little melody to liven it up.

Ableton makes it so easy to play back any audio clip in a sampler, or Simpler, that it’s almost a sin not to. It takes no time whatsoever to create a simple patch made of your vocalist's original recording and through resampling, it blends in and doesn’t require any more plug-ins!

Want to go deeper into Ableton Live? Our video courses in the AskAudio Academy are here for you!
Related 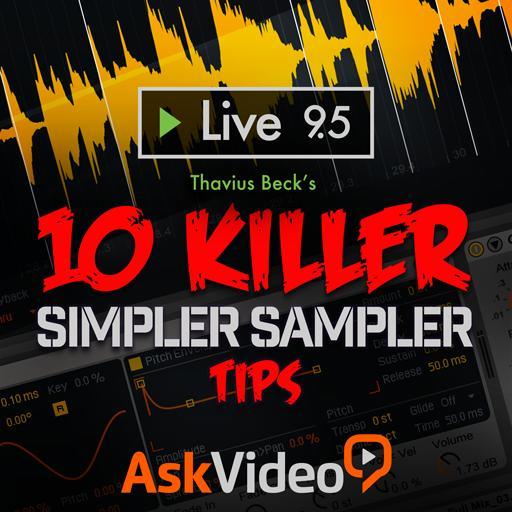 Dream It. Do It.
Do you want to learn 10 Killer Simpler Sampler Tips?
Yes, I want to learn!
No Thanks, I just want to read the article.
Feedback
How are we doing?
We'd love your thoughts, feedback and questions regarding our new site. All feedback is appreciated!
We do not respond to this form! If you need support, please visit our support page.
Thank you for your input!
Your message has been successfully sent
Course Advisor
Don't Know Where To Start?
Ask A Course Advisor