As part of our ongoing series of Adobe After Effects productivity tips, this article will focus on pointers to help you preview and render your final output faster and more efficiently.

RAM Previews are a powerful tool for testing your animations as you work on them. Rather than rendering the animation as a movie file (and filling up your hard drive with test files) opening it, viewing it, then heading back into After Effects to make adjustments, you just hit Contol-0 to render the Comp window into RAM and immediately view it in real time in the window. Of course, you need to have enough RAM in your system to contain the entire comp. For shorter compositions however, frequent RAM previewing is an essential productivity tool.

But, did you know that you can save the RAM Preview right from memory as a lossless movie file without having to render it again? If you've completed a RAM preview and you're happy with the results, just choose Composition > Save RAM Preview.... When you do, After Effects will ask you to choose a save location for the file. Clicking OK will automatically start the output in the Render Queue, which will go very quickly because all After Effects has to do is dump the frames from RAM into a QuickTime movie; typically it just takes seconds.

2. Use the Region of Interest

...then draw with the crosshair cursor in the Comp window around the area you want to focus on. 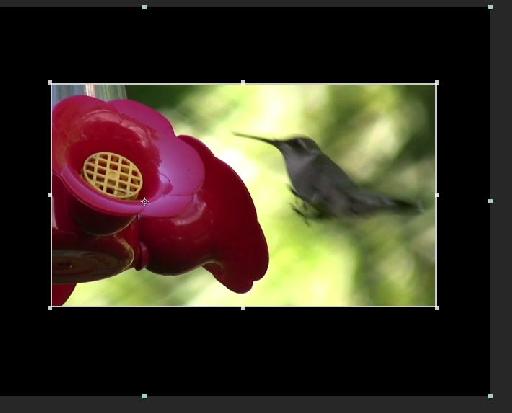 Now when you do a RAM Preview, only the ROI will be rendered, and since the frame size is smaller than the full Comp, the preview should go much faster. To get back to the full-size preview, just click the ROI button again.

If you have layers in your Comp that don't need to be modified but still have to be rendered when you preview and output, try Pre-rendering them to save render time.

When you Pre-render, After Effects will render the selected comp elements as a lossless movie and automatically replace them with the rendered file in your comp, often saving you significant rendering time for the final output.

If you're working with large image or movie files in your comp, you can save some preview and interaction time by replacing the large file with a Proxy, a lower-resolution or still-image version of the large layer.

To create a Proxy, Control-click on the footage item in the Project window and choose Create Proxy from the menu. You have a choice of Still, to use a still image version of the movie file, or Movie, to create a lower-res version. 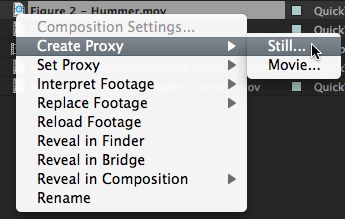 If you choose Still, After Effects will set up a Photoshop render in the Render Queue, and when you render it, it will automatically replace the movie file with the still. You'll also see that the footage item has turned into the Photoshop file with a filled box next to it. In addition, the footage item will now have two listings at the top of the Project pane: the original and the proxy.

One final tip, but an important one: did you know that you can render once but output to multiple formats in the Render Queue? If you need to output the same project into several different formats, this can be a tremendous time-saver.

To do this, just add your comp to the Render Queue in the usual way. Then, select the Output Module text under the Render Settings and hit Command-D, for Duplicate. You'll add an Output Module to the queued item, and you can then choose a new Output Module setting from the Templates list, or customize your own. You can do this as many times as you'd like.

The real time-saver here comes from the fact that once a frame is rendered, it takes almost no time to output it to a different format. Rendering is far more time-intensive than output.

I hope these tips will help relieve you of a little deadline stress; as always, experiment, and (if possible, when the clock is ticking down) have fun!