All Articles After Effects
Generating Visual Audio Waveforms in After Effects
Richard Lainhart on Tue, May 31st 0 comments
Language
A common effect you see in music videos is an audio waveform, often overlaid on the video action, that pulses in sync with the music. It's easy to create this basic effect in After Effects...

A common effect you see in music videos is an audio waveform, often overlaid on the video action, that pulses in sync with the music. It's easy to create this basic effect in After Effects, and in this quick tutorial, we'll show you how.

Step 1 - Set Up Your Audio Track

For this tutorial, I'm going to use a simple drum loop - of course, you can use any available audio source for this effect. In my case, because the loop is short, I want to extend it a bit and ensure that it will loop cleanly when I create the final waveform animation. So, after I import my track (DrumLoop1.aiff), I click on it in the Project window so I can see the info for the track at the top of the window: 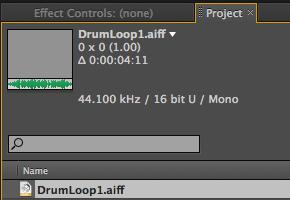 It's only a little over 4 seconds long, and I want a longer comp for this demo, so I'm going to loop the track before I start working with it. To do that, select the track in the Project window, control-click on it, and choose Interpret Footage > Main... to open the Interpret Footage dialog:

In this dialog, down at the bottom under Other Options, next to Loop, type in 2 to loop the track twice and double its length: 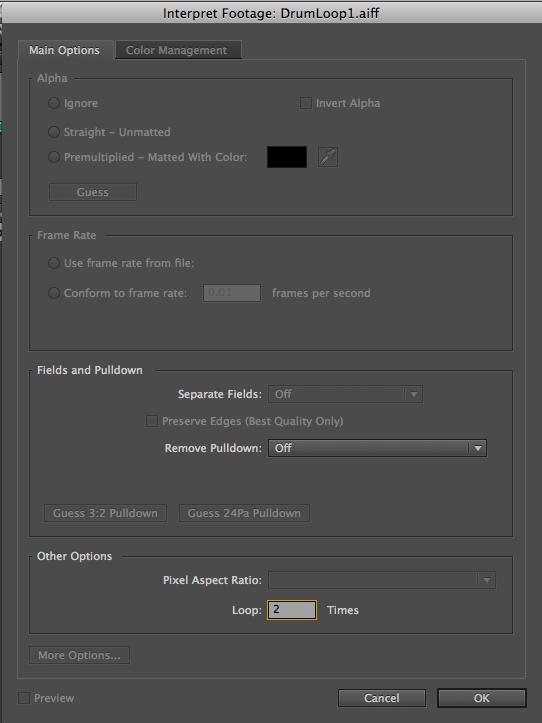 Now drag that clip onto the New Composition button at the bottom of the Project window to make a new comp that is exactly the length of the loop, so that when the rendered comp repeats, the audio will loop smoothly. I've made my comp 1280x720 pixels.

Now, we could add the Audio Waveform effect to the audio layer in the comp, and After Effects would allow us to do that, but we wouldn't actually see anything, because the audio layer has no visual component and so nothing to render the waveform on. So, we need to add a Solid layer to contain the visual information. As usual, choose Layer > New > Solid... to make the solid layer; make it solid black and the full size of the comp: 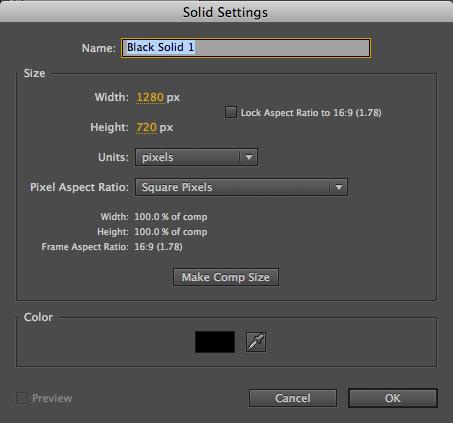 Step 3 - Set Up the Waveform Effect

First, you need to tell Audio Waveform to use our DrumLoop1 as the Audio Layer for the effect, or we won't get any waveform generation. Next, we'll experiment with some settings in the effect and see what happens - I encourage you to try this on your own as well.

So, I'm going to change the default waveform color to green to make it look a little more like an old-fashioned oscilloscope, increase the Maximum Height so the waveform fills more of the screen (the best value will depend on the amplitude of your own audio track), and increase the softness of the waveform, as shown here: 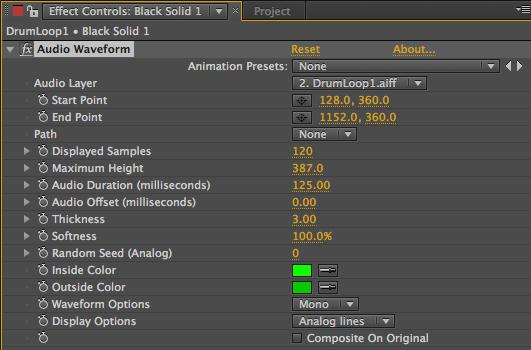 Render this out, and this is what you'll get:

And that's the basic procedure. Try varying any and all of the settings in the effect controls window, including animating them over time. One interesting variation you can try is to duplicate the Audio Waveform effect several times, enabling Composite on Original for the duplicates (so each copy will be visible), increasing their Random Seed values (to add a little variation to the waveform, and increasing each duplicates' Thickness value, as shown here: 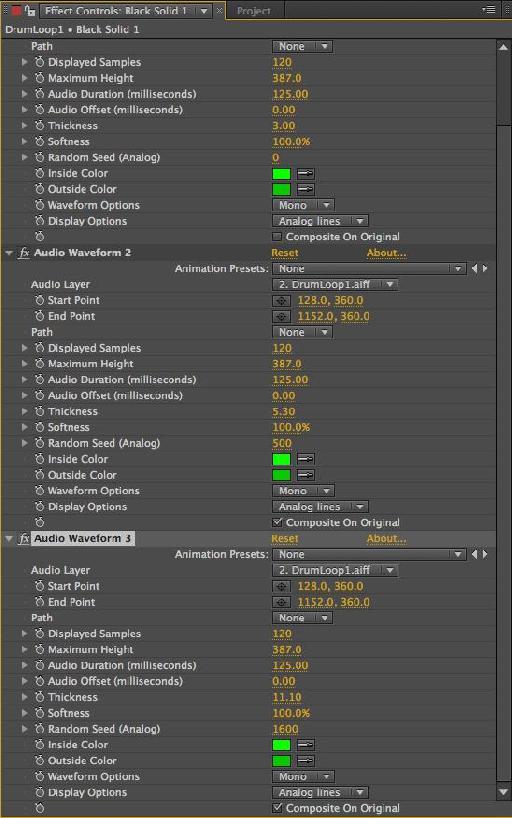 This will give you a more chaotic waveform with a little more visual interest:

As always, experiment on your own, and have fun with After Effects!