All Articles Final Cut
Compositing Tricks in FCP X: Double Up and Teleportation
Iain Anderson on Sun, May 29th 0 comments
Language
Don't despair if you're short of an actor or two. This excellent compositing technique for Final Cut Pro X users allows you to duplicate talent in your videos and you don't even need a green screen!

If you’re short on talent to appear in your videos, don’t despair—you can appear more than once in your own videos. If you’ve not seen it before, check out some videos from Natalie Tran (aka communitychannel) on YouTube or this review on The Verge. It’s not hard to do, but it does take a little planning, and fancy footwork in the editing room. You won’t even need a green screen—but if you can control lighting, you’ll have an easier time.

Yes, that’s right, you can appear twice in frame

If you’re stuck with only natural light, you can still produce a great effect, but you’ll find it hard to avoid a visible seam between the two shots. This other review from The Verge is effective and has great timing, but the lighting simply changed too much between the two shots to allow for a seamless frame.

Essentially, if you want to appear twice in the same clip, lock down the shot, and record yourself in two separate positions (let’s say A and B) within the frame, just letting the camera roll. Afterwards, you’ll put half the clip (position A) on top of the other half (position B) then mask that top clip to let the bottom clip show through. Easy, right?

These two shots are recorded in a single continuous take

First off, make sure you’ve got a tripod, because you’ll need to lock down the camera. Make sure it’s a solid tripod that’s not going to move around due to footsteps or wind. Any camera will do, but if you don’t have a friend helping, a flip-around screen (like the one on the Panasonic G7) will help hugely with framing. You’ll have to make sure that your two positions don’t overlap, and that includes shadows too. Finally, since you won’t be able to frame the shot exactly if you’re in it, shoot a little wide if you want to allow for repositioning in post.

The orange “used media ranges” tell the story: the first part of the clip has me on the right, and the second half on the left — though I could have shot a little wider

When you’re set up, record yourself in the first position, then move to the second position and record there too. If you actually want to speak with your other self, you’ll need to practice your timing and likely tweak it in post too. For your first attempt, anything is fine—sit there, look around disapprovingly, or do nothing at all. If you mess anything up, just record another take, but don’t stop the camera. Touching it can change position very slightly, and ruin the effect.

Import the video into FCP X, then select the first half of your video (position A) and put it on a timeline. Select the second half (position B) and connect it above.

Two clips, stacked one above the other

If you’ve shot it correctly, you should be able to select the top clip, press V to disable it, and see no movement or jitter in the background as the clips switch. If the lighting has changed just a little, that’s OK, but drastic lighting changes will mean a reshoot.

To let the bottom clip show through, we need to mask back the top clip. If you’re really lucky, you can select that top clip, access the Crop settings on Trim, and just use the Left or Right sliders to hide one side of the shot.

Zoom out to place points beyond the edges of the frame

However, if you need to split the shots along a more complex line, look in Effects > Masks for Draw Mask. Drag it to the top clip, then follow the on-screen instructions to click and drag a shape around the person in the top clip, leaving room for any hand movements. The Draw Mask shape can also be keyframed if you need to change the shape over time.

Sliders also allow you to adjust the feather to soften the edge of the mask, which can really help to disguise subtle lighting differences. For example, it’s possible that shadows cast by one character affect the lighting across the frame, and expose the seam. You may be able to fix this by adjusting the exposure of one clip with the color board, pushing the midtone puck just up or down a little on one of the clips.

That’s the basic concept done, but if you need to tweak timing, just move the content of that top clip earlier or later in time by dragging on the center of the clip with the Trim tool to perform a Slip operation.

Choosing any speed (e.g. 200%, 50%) from the Retime menu creates a newly retimed region, and you can then drag the handle at the right-hand end to adjust its speed

For longer continuous shots, where characters need to talk to one another, you’ll want to use the Range Selection tool to select a single angle over the period when a character is not speaking, then adjust the speed of that part of that angle using the retime menu and then by dragging the Retime Clip overlay. This will let you choose exactly when each line is spoken, and should be pretty seamless if done carefully.

There’s one more step which can sell the whole effect. Select both of your clips together, then press Option-G to turn them into a single Compound Clip.

The free effect TKY Camera Shake Effect, once installed into your Home > Movies > Motion Templates > Effects folder, will let you simulate the shake of a camera, and make the whole thing look handheld—if you want to, of course.

It’s possible to repeat the technique to appear as many times as you can physically fit in frame. If you set up a really wide shot, it’s pretty straightforward to move around the space, stopping in several parts of the frame for the same amount of time.

Here are three people who each took two positions within a frame, in a silly movie

In the timeline, just take each different location, stack them all up on top of each other, and use Draw Mask to isolate just that one part of the frame.

Extending this technique a step further, teleporting, just like in your favorite TV show, is actually pretty simple. Record your subject in a shot, saying “Beam me up!”, holding their position for several seconds, and then stepping out of frame and letting the camera continue to roll, to record a clean background plate.

A colleague vanishes in an old 48 Hour Film Project film

In a timeline, put the clean background clip at the bottom, and then the shot with the person on top. After your subject cries “Beam me up!”, transition that top clip away to reveal the background. A cross dissolve can work, but the fancier you can make the effect, the more impressive it’ll be. If you’ve got a copy of Motion, there’s a built-in Particle Emitter called “Transport” which is just made for this, and you can find it in the Library under Particle Emitters > SciFi.

Here’s how to set up the full teleportation timeline

Mind you, if you don’t know Motion yet, here’s a pre-made Generator you can use free of charge. You’ll need to manually place it into Home > Movies > Motion Templates > Generators, and then you’ll be able to find it in FCP X. Drag this above your transition and tweak the settings by heading to the Inspector, selecting the Generator tab, and dragging on the numbers to adjust them.

What else? A classic sci-fi teleportation sound effect is all you need, and you’ve got it already. In the Audio tab, under iLife Sound Effects, Sci-Fi, scroll down to Warp Engineering 04. Drag that to the same time as the sparkles, fade down the end, and you’re done.

Once you know how, it’s pretty straightforward to appear twice or more in the same frame. It’s easy to teleport (or make an object vanish) as well—and I’m sure you’ll be able to come up with your own ideas too. Tricks like these are not only heaps of fun, they’re great practice both in front of the camera and behind it, and they let you perform magic. What better way to impress your clients and/or children? 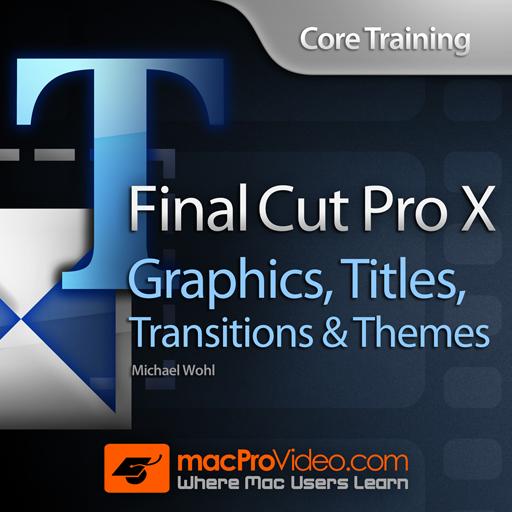 Dream It. Do It.
Do you want to learn Core Training: Graphics, Titles, Transitions and Themes ?
Yes, I want to learn!
No Thanks, I just want to read the article.
Feedback
How are we doing?
We'd love your thoughts, feedback and questions regarding our new site. All feedback is appreciated!
We do not respond to this form! If you need support, please visit our support page.
Thank you for your input!
Your message has been successfully sent
Course Advisor
Don't Know Where To Start?
Ask A Course Advisor