I’m writing this from Cupertino, where I’ll be attending the FCP X Creative Summit tomorrow, and where FCP X 10.3 was just demonstrated for the first time, also showing off the new MacBook Pro’s Touch Bar. While the new hardware looks terrific, it’s the new software that really looks amazing. The new UI, new timeline features and much more make this very likely to be the most significant update in FCP X’s history. Let’s dig in! Crisp, clean, and no color in the icons

The first thing that hits you is how flat everything has just become. Drop shadows have been nearly eliminated, icons are crisp monochrome, text labels everywhere have been updated to the new San Francisco system font, and if you’ve seen the latest iMovie recently, there’s a clear lineage on show. The FCP X version includes a great deal more complexity, however. As an existing user, your first reaction may well be: So where is everything? 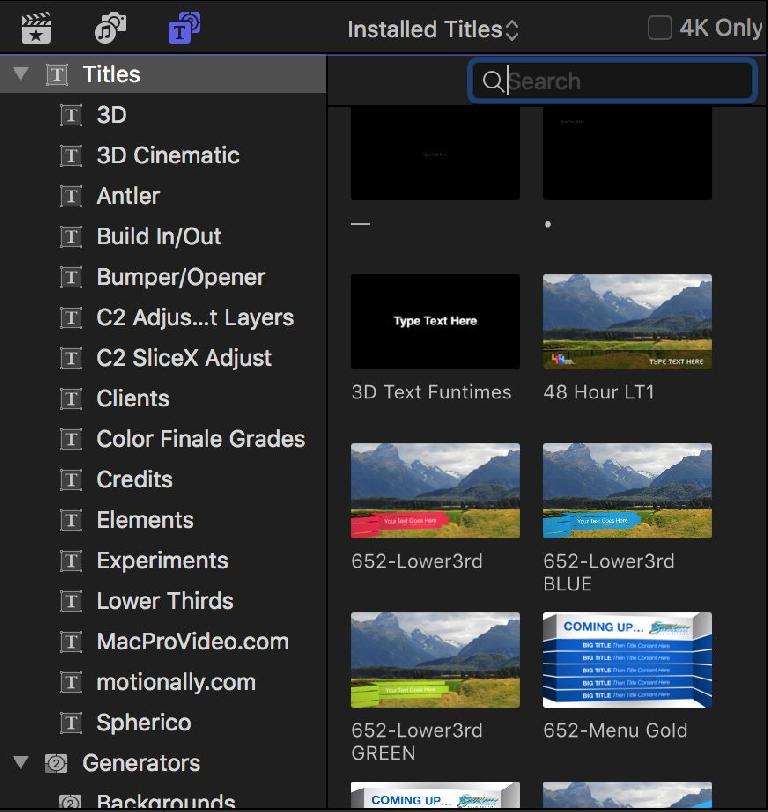 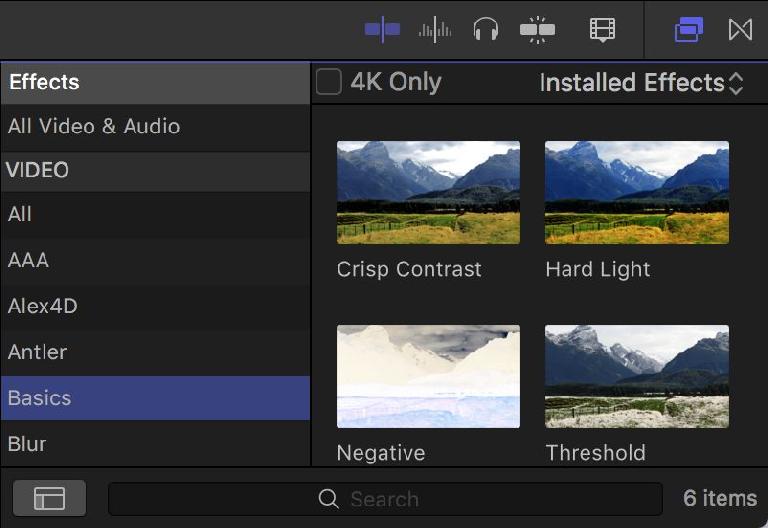 Still to be found in the bottom right The new Background Tasks window, much like the old one 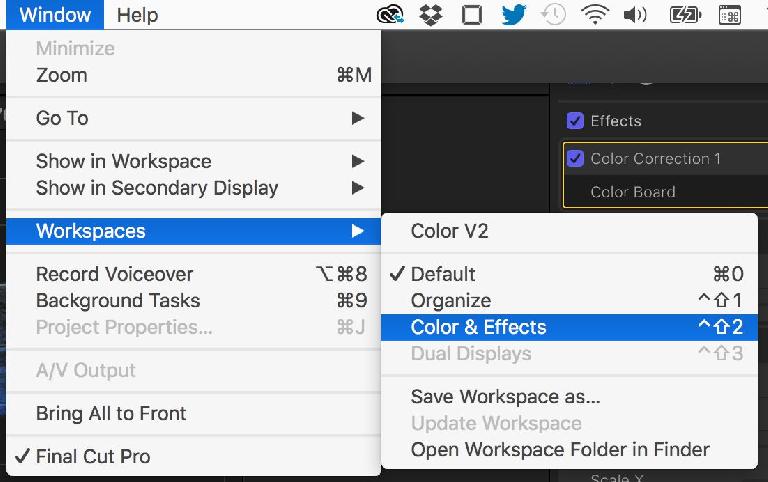 Two of the new buttons in the top right corner hide the Libraries pane and the Inspector—both of which were possible before. However, you can now also hide the Timeline with the middle button of these three, giving you an optimized view for logging and keywording.

More powerful still is that under Window > Workspaces you can now switch between these combinations of open panes quickly (Default, Organize, Color & Effects, Dual Displays) but these workspaces remember the specific combinations of Scopes and Browser panes you’ve kept open. It’s faster than ever to switch between different window layouts, and that’s a definite improvement.

All that aside, probably the biggest change is to the timeline, which even has a new name...

The timeline remains magnetic, and no, they didn’t bring back tracks. However, for audio editing, they came close, with an enhanced mode for Roles to play, and Audio Lanes that give a whole lot more control when working with audio. 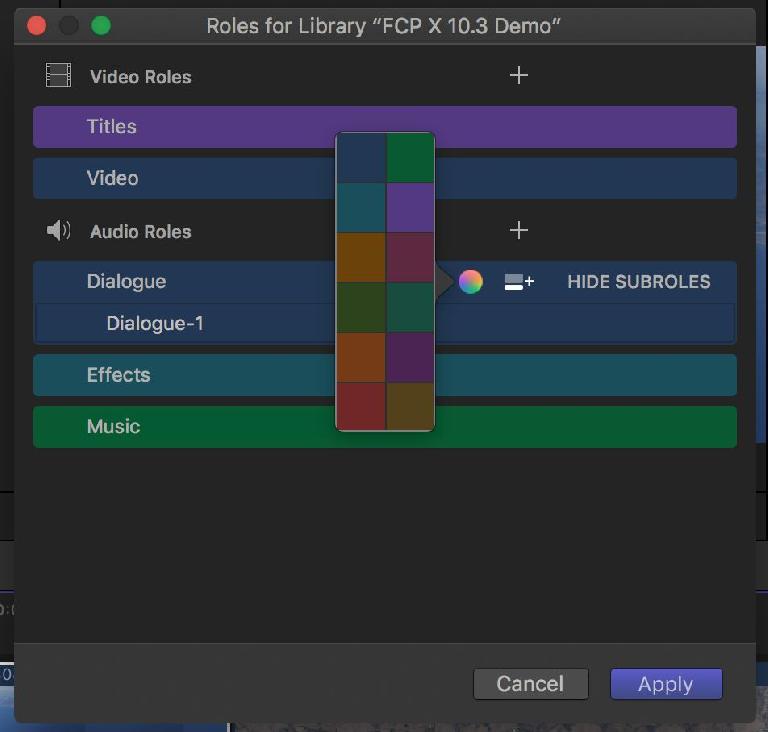 Many colors to choose from — audio editing just got easier

Bring up the Timeline Index, then flick across to Roles, and you’ll see a new button at the bottom, “Show Audio Lanes”. Activating this separates the audio visually, based on each clip’s Role, and Subroles within each role are separate too. Audio roles can be re-ordered simply by dragging, and custom colors can be assigned for any audio or video role. A “Focus” button on each audio role acts like a visual “Solo” button, shrinking all other roles to a tiny bar. And yes, there’s a… 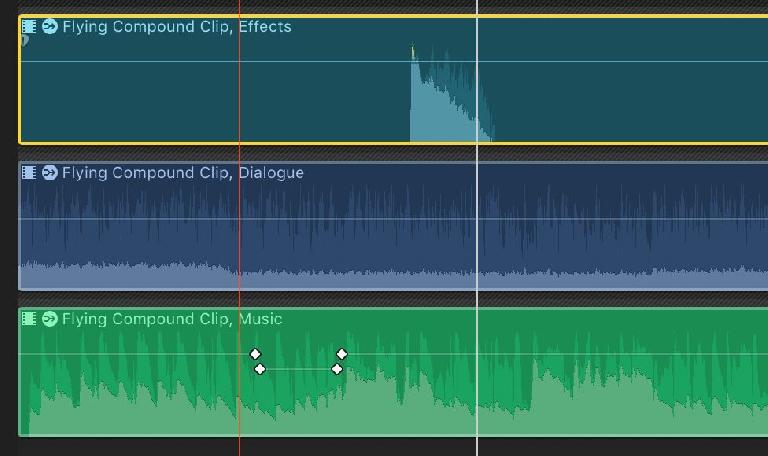 Roles within Compound clips can be edited independently

You can now adjust levels or add effects to any individual role within a compound clip. At the end of your project, if you want to lower volume of all the music and apply a compression effect to all the dialogue, that’s very simple indeed.

And Many More Smaller Features Too

As well as the big changes, many smaller pain points have been eliminated. Just a few:

As usual, you should not update if you’re in the middle of a project, and this is even more true this time around—Apple have released a support document warning of possible audible changes in upgraded projects. Always keep a copy of the older versions of FCP X/Motion/Compressor before you upgrade, and keep a copy of important recent libraries too, just in case. It’s a whole new world with a new flat interface

It’s been a while coming, but this release will make a lot of people very happy. Existing users will need to retrain their brains with the new locations of all the buttons, but new users will have an easier time than ever. If you’d previously dismissed FCP X, it’s definitely time to take another look. Audio has never been more powerful and the timeline has never been so nimble. It’s a great update, it’s a free update, and you’re going to love it.

Look out for new articles and training courses soon exploring all the new features of FCP X 10.3 and also looking at the newest releases of Compressor and Motion.

Dream It. Do It.
Do you want to learn Get Started Now!?
Yes, I want to learn!
No Thanks, I just want to read the article.
Feedback
How are we doing?
We'd love your thoughts, feedback and questions regarding our new site. All feedback is appreciated!
We do not respond to this form! If you need support, please visit our support page.
Thank you for your input!
Your message has been successfully sent
Course Advisor
Don't Know Where To Start?
Ask A Course Advisor