All Articles Final Cut
Introducing Photoshop Layered Images in FCP X
David Smith on Mon, February 20th 0 comments
Language
Working with layered Photoshop images was one of "those missing features" which has now made it into FCP X. David Smith paints a picture of how it has been implemented in 10.0.3.

If Apple had released Final Cut Pro X last summer looking something like that (which it does now) then the world would be a better place I hear you say? I cannot pretend that I do not agree with you.

One of the new features that's included in the .0.3 release that has really got me excited is the welcome return of layered Photoshop image support. It’s not a particularly tricky workflow—at Final Cut Pro X’s end anyway—but there are some areas that deserve further exploration. So, let's explore.

Firstly it’s important that we get our Photoshop image right; that will make life much easier in FCP X.

It's imperative that any Photoshop image that's intended to be delivered on a TV screen is created with that in mind from the outset. In Photoshop choose File > New or press Command-N and from the Preset options choose Film & Video.

Normally for an HD project I’d recommend setting the Color Profile to Rec 709, however I’ve noticed that FCP X doesn’t appear to support this yet (perhaps a bug) so I am using sRGB for now.

I’ve created an image that contains 3 content layers plus Masks, Adjustment Layers and Layer Styles (all 3 of which will not be supported in FCP X).

It’s your turn to create something similar. Once you are done save it and move on to Step 3.

Any layers that might contain Masks or Clipping Masks must be either Merged as with step 3 or Rasterized.

To Rasterize a Mask, select the layer and choose Layer > Rasterize > Layers.

Layer Styles such as Drop Shadow or Outer Glow are a little trickier to rasterize. The secret here is to place a blank layer below the Layer containing styles. Select both layers and choose Layer > Merge Down or press Command-E.

Once all the Masks, Layer Styles and Adjustment Layers have been Merged or Rasterized save the Photoshop file as a .PSD

Nothing too complex here: Select the event the Graphic is to be added to and choose File > Import > Files or press Command-Shift-I.

Select the layered Photoshop file and press OK. The file appears in the Event Browser as a Compound Clip.

This can be done from the event browser, or after the clips have been edited to the Storyline. Either way the Compound Clip opens in the Project Timeline and appears in the viewer.

The clip is separated into 3 story lines, one for each Photoshop layer (this is very similar to a nested sequence of tracks that Photoshop images created when imported into FCP 7).

I want to start adding animation to some of the Photoshop layers so they will fade in and/or fly in from off screen. To help make this easier Right-Click on the Adjustments pop-up menu of the top track (in my case the text “2012”) and choose Show Video Animation or press Control-V.

Double click on the timeline titled Compositing: Opacity to open it. Grab the handle at the start of the timeline 24 frames to the right.

This will create a 24-frame fade in, as indicated by the Black opacity line.

Repeat step 9 for the second track (in my case the text “Curling”). Only this time drag the handle to 48 frames, so the text takes twice as long to fade in.

Once done, double-click on the opacity timeline to collapse it back down again.

Select the first track again (“2012”) and set the Animation Timeline to Transform: Position. This makes it easier to add and edit keyframes for the Position parameter.

Open the Inspector (Command-4) and in it click on the Transform Effect button to turn on the transform controls.  Use the Transform Controls to drag the layer containing text off screen.

In the Animation Timeline Option-Click on the timeline at the first frame to add a keyframe for that position.

Click in the Dashboard to move the Playhead position and type +58 and press Return. The playhead moves forward by 58 frames (10 frames past the second layer's fade in). This is where the “2012” text will stop moving along its path.

This time, just for a change, click on the Add Keyframe button in the Viewer to add a keyframe at the Playhead position. Drag the text layer to its final position (notice the red broken line indicating the motion path).

If you want to try a bit more experimentation, try adding some rotation to the animation, or scale...or maybe even both!

If the timing feels odd, then try dragging the keyframes forward and back in the Animation Timeline until it feels/looks right.

Just like legacy versions of Final Cut, FCP X has numerous ways to add and edit keyframes. For me, just like previous versions, the ability to Add, Remove and Move keyframes on a timeline is still the best method to use.

For the best preview experience press Cursor Up or Home to move the playhead to the start of the animated compound clip. Then press Shift-Command-F to view Full Screen.

I hope you find the reintroduction of support for Photoshop Layered images in FCP X a useful tool. I’m sure you will, just like you always did right?

Related
David Smith
David Smith is Scotland's most qualified Apple and Adobe certified trainer. Having completed his education at Edinburgh College of Art's BAFTA winning Film School, David moved straight into TV production, first as a Vision Mixer then quickly becoming, at the age of just 24, a director of live TV studio productions. In 2001 he moved into Higher Education where he became a lecturer in TV Production, specializing in post-production and live studio production. During this time, and working with the support of the BBC, Channel 4 and independent production companies, David was instrumental in the design, development and implementation of industry-approved vocational courses across Scotland's Colleges. In 2006, after working closely with Apple Computers to create a unique multimedia studio for education at the Music and Media Centre in Perth, David became Scotland's first Apple-Certified Trainer for Pro Apps. This led on to David forming the first Apple Authorized Training Centre for Education, north of Manchester. In 2008 David made the move to full time training and joined the ranks at Academy Class, Ltd. where he continues to train industry professionals as a certified trainer across the Adobe Creative Suite and Apple Pro Apps range.
Related Videos
Comments (0) 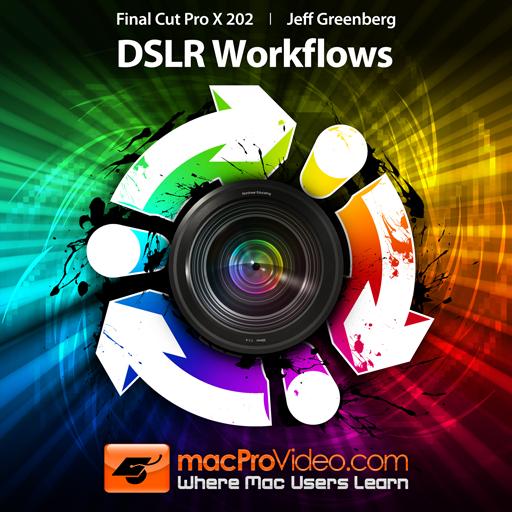 Dream It. Do It.
Do you want to learn DSLR Workflows?
Yes, I want to learn!
No Thanks, I just want to read the article.
Feedback
How are we doing?
We'd love your thoughts, feedback and questions regarding our new site. All feedback is appreciated!
We do not respond to this form! If you need support, please visit our support page.
Thank you for your input!
Your message has been successfully sent
Course Advisor
Don't Know Where To Start?
Ask A Course Advisor