All Articles News
Major Update to Logic Pro X 10.0.5
Rounik Sethi on Thu, December 19th 4 comments
Language
Wow! Apple have been busy updating the latest version of Logic Pro X 10.0.5 with tons of tasty new improvements and enhancements across the board. This could easily be 10.1!!

Version 10.0.5 of Apple's Flagship DAW has found its way onto the Mac App Store this morning and weighs in at over 800 MB. So, what does that mean for long time Logic Pro users? Has Christmas come early? Let's take a look at the new features in this FREE update.

There have been some particularly exciting changes to the Channel EQ and Linear Phase EQ plug-ins in Logic. Underneath the gorgeously redesigned interfaces (which also are reflected in the Smart Controls) are the ability to apply EQ selectively to stereo left, right, middle or side signals only! The new Double Precision processing allows for more accurate filtering. This should be particularly apparent for low frequencies. Additionally, an oversampling option provides better clarity when filtering high frequencies. 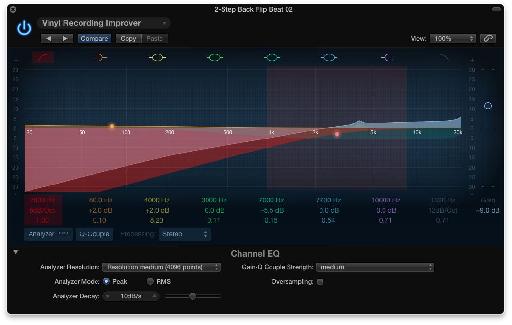 The EQ has its own tab in the Smart Controls panel.

Upon launching Logic Pro 10.0.5 for the first time, you'll be asked if you wish to download the new content. This contains the 3 new Drummers and 11 additional Drum Kit Designer patches. The download is approximately 5 GB - or at least it's taking me 5 hours to download... So, be prepared for a bit of a wait!

While you wait for 10.0.5 to download from the App Store, check out the largest collection of Logic Pro X video tutorials available online here at macProVideo.com.

The Best of the Rest!

We've yet to put Logic Pro X 10.0.5 through a thorough workout, but Apple have listed the following fixes and improvements for this version. Be prepared for a long, long read!!! Evidently, the Logic team have been very busy indeed:

Want to learn how to make the most of Logic Pro X 10.0.5's improvements? Check out these video courses now:
http://www.macprovideo.com/logic
Related

Rounik Sethi
Rounik is the Executive Editor for Ask.Audio & macProVideo. He's built a crack team of professional musicians and writers to create one of the most visited online resources for news, review, tutorials and interviews for modern musician and producer. As an Apple Certified Trainer for Logic Pro Rounik has taught teachers, professional musicians and hobbyists how to get the best out of Apple's creative software. He has been a visiting lecturer at Bath Spa University's Teacher training program, facilitating workshops on using music and digital media tools in the classroom. If you're looking for Rounik, you'll most likely find him (and his articles) on Ask.Audio & macProVideo.com.
Related Videos
Comments (4)