All Articles Review
Making Art with Unusual Apps
Iain Anderson on Sat, June 18th 0 comments
Language
If you want to put your hand and heart towards more creative artistic pursuits but would rather not use Adobe products, there are plenty of viable alternatives. Iain Anderson shows some of the best.

Adobe the design space, but they don’t have a monopoly on everything. Even if you do use Photoshop for photo editing, Illustrator for logos and InDesign for layout, there’s still plenty of room to use other apps and physical techniques to create art that’s simply not possible to make with Adobe’s flagships. Some of these apps are on iOS, and others exist in animation programs on the Mac. Let’s see how to repurpose their glorious output. 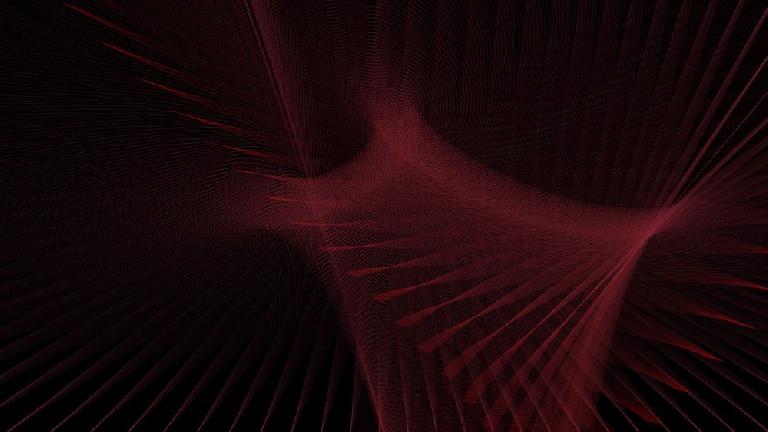 This screen saver was made in Quartz Composer, and can create all kinds of line-based art.

If you’ve ever dabbled in Quartz Composer, or have simply built up a range of screen savers, you’ll have access to some great visual art generators. Luckily, they’re easy to capture, and the higher the resolution of your screen, the higher the resolution you’ll be able to capture. Simply activate the screen saver (I like using Hot Corners for this) and press Command-Shift-3. This won’t deactivate the screen saver, so press it repeatedly to grab a few more stills on your desktop. 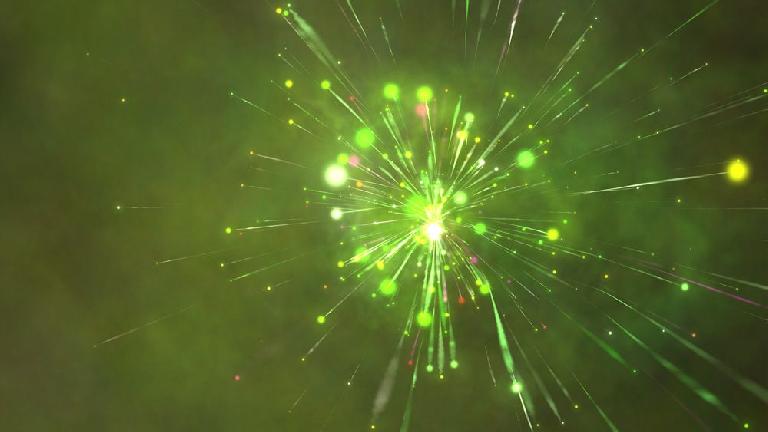 Just one still from the iTunes Visualizer.

Yep, iTunes has a Visualizer that can make some great art too. Launch iTunes, then Command-T to show the Visualizer and Command-Control-F for full screen. Again, Command-Shift-3 repeatedly to snap away. There are a few different visualizers to choose from in the View > Visualizer submenu. 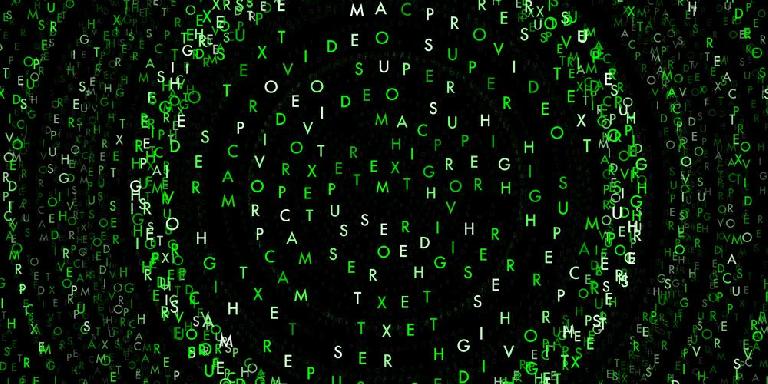 This field of letters is easy to create with Nodes by Yanobox.

Between replicators, paint strokes and third-party effects like Nodes, Motion is a great playground for creating random artwork. Luckily, to export at high resolution is easy. Create a 4K canvas if that’s going to be enough, but be aware you may need a grunty video card for decent performance at higher resolutions. 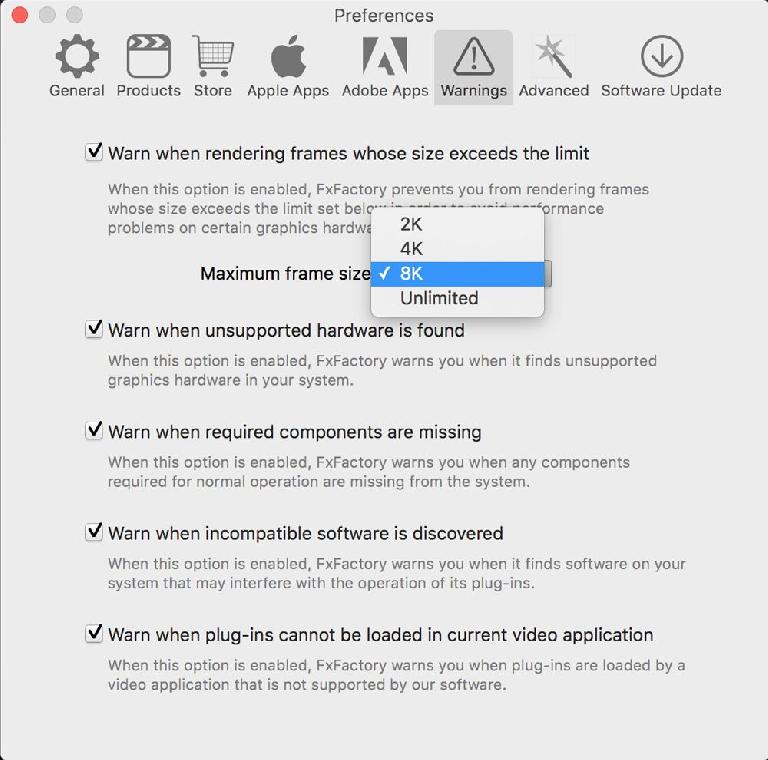 Increase the resolution limit in the FxFactory prefs for super-high-res artwork.

Also, if you’re using an FxFactory plug-in, you’ll need to change a preference to allow rendering at sizes greater than 4K. Launch the FxFactory app, choose Preferences, then under Warnings, up the limit from 4K to 8K.

Back in Motion, create your artwork, adding plug-ins and tweaking whatever settings you need to, until you’re happy with the still frame under the playhead. Choose Share > Save Current Frame, choose Best under Render Quality, then export a PNG. If you’re trying to do something really tricky, your system may slow down while the PNG frame exports. 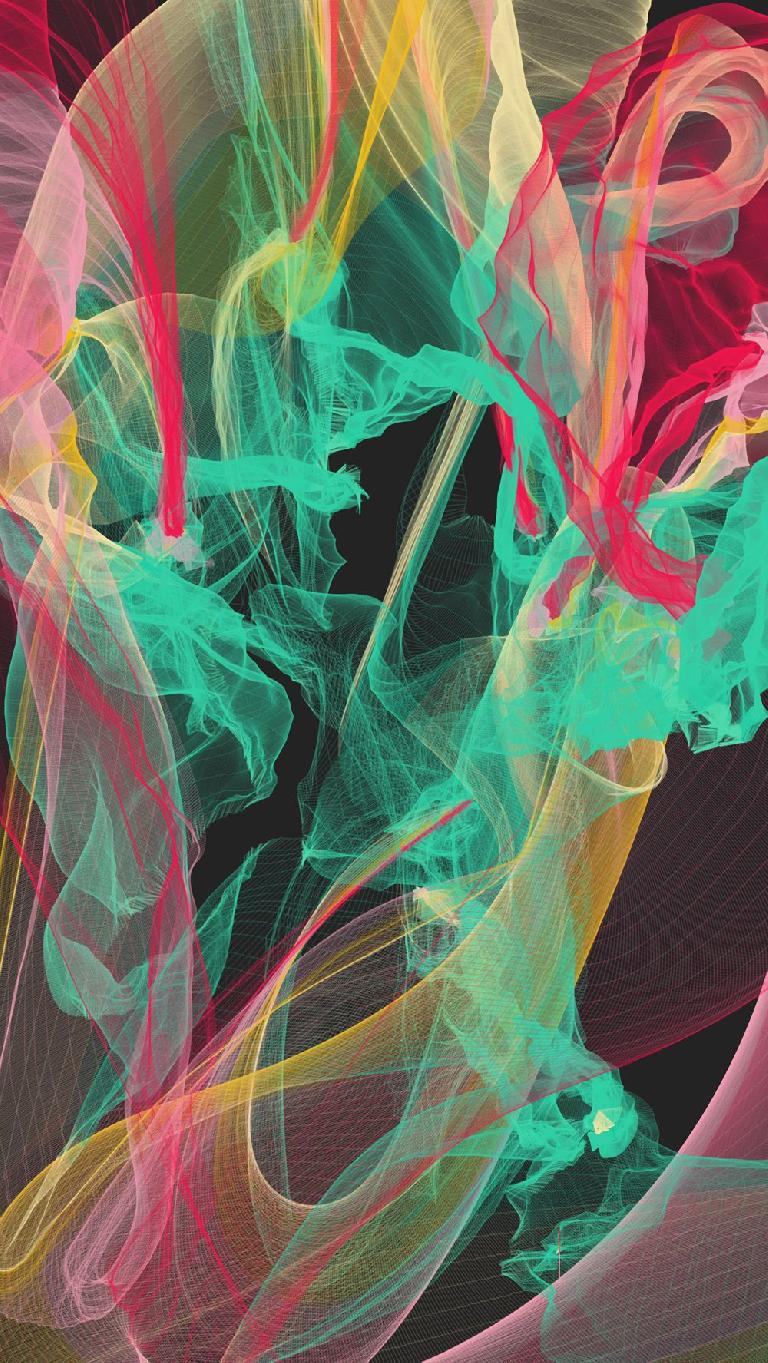 Fun to explore and rewarding when you get it right.

This free iOS app lets you make terrific organic artwork, something like a cross between a silly string explosion and silk rippling in a breeze. You can get started quickly, by touching the screen and simply seeing what happens, but knowing your options can help a lot. Essentially, each finger will lay down a mesh of connected lines, and you’ll see very different results from holding down and scratching back and forth, holding down and making circles, holding down and moving slowly, repeatedly making short strokes, or from using many fingers at once. Each stroke will change color depending on how long it’s held for, starting with the earliest part of a stroke.

In the settings, you can change the colors which a stroke moves through, the length, flow and opacity of strokes, and the background color or image. When you export, you can choose a high resolution option (definitely the way to go for print-quality output) but use an iPad for the absolutely highest resolution options here. 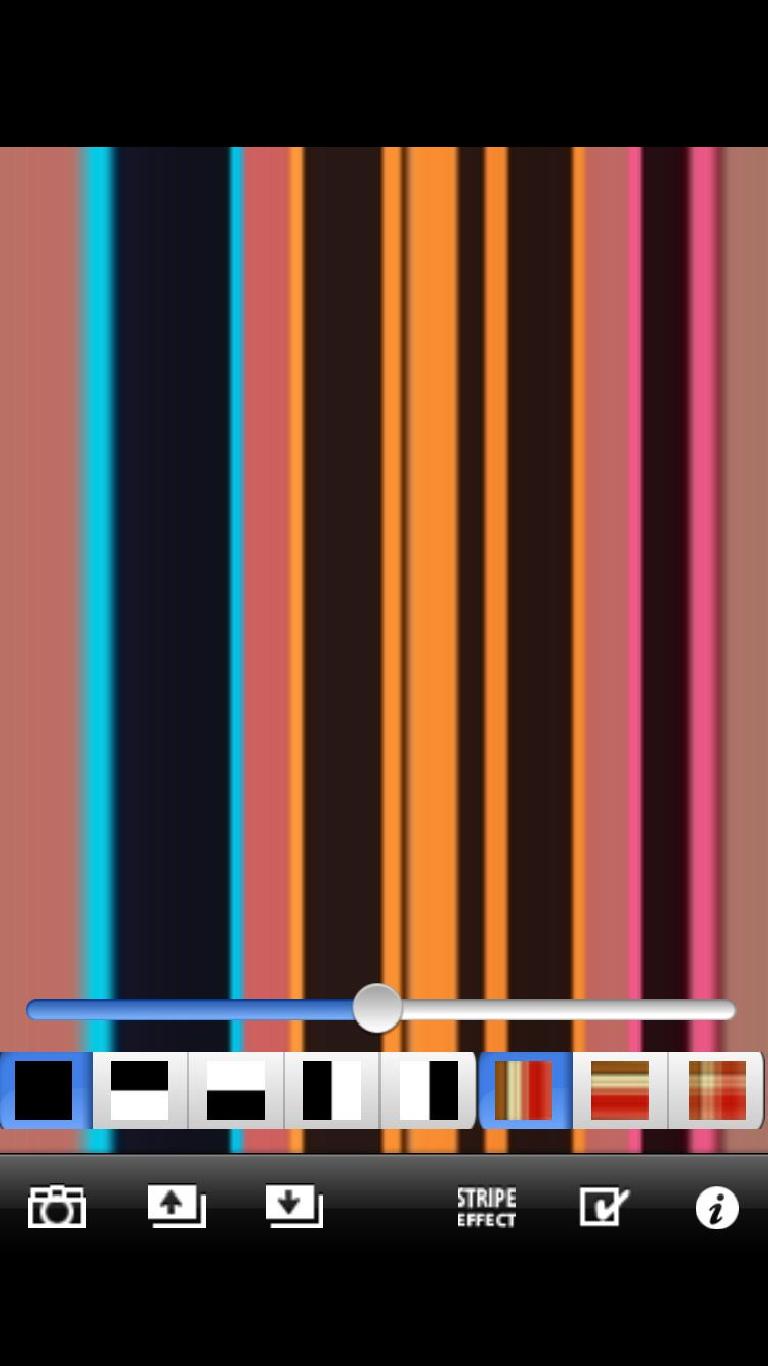 Stripes are great, and this is the easiest way to make them.

This free app is a little odd, but creates stripes in a way I’ve been using on the desktop for years. Essentially, you can take a 1px selection in any part of a photo, then scale it up (in one dimension only) to create a 2D image of stripes. This app does exactly that, but also lets you snap a picture to use as source, then lets you drag to choose the part of the image you’d like to create stripes from.

Press the camera button in the bottom left to take a snap, then press the Stripe Effect button on the right to change the effect. Icons and a slider now appear above these buttons, and the slider lets you change where the stripes are coming from, while the other buttons change the way the stripes are made, and if you can see the original image beneath them.

When you’re done, press the Down arrow button to export to the Camera Roll. You can also import an image from there by pressing the Up arrow. 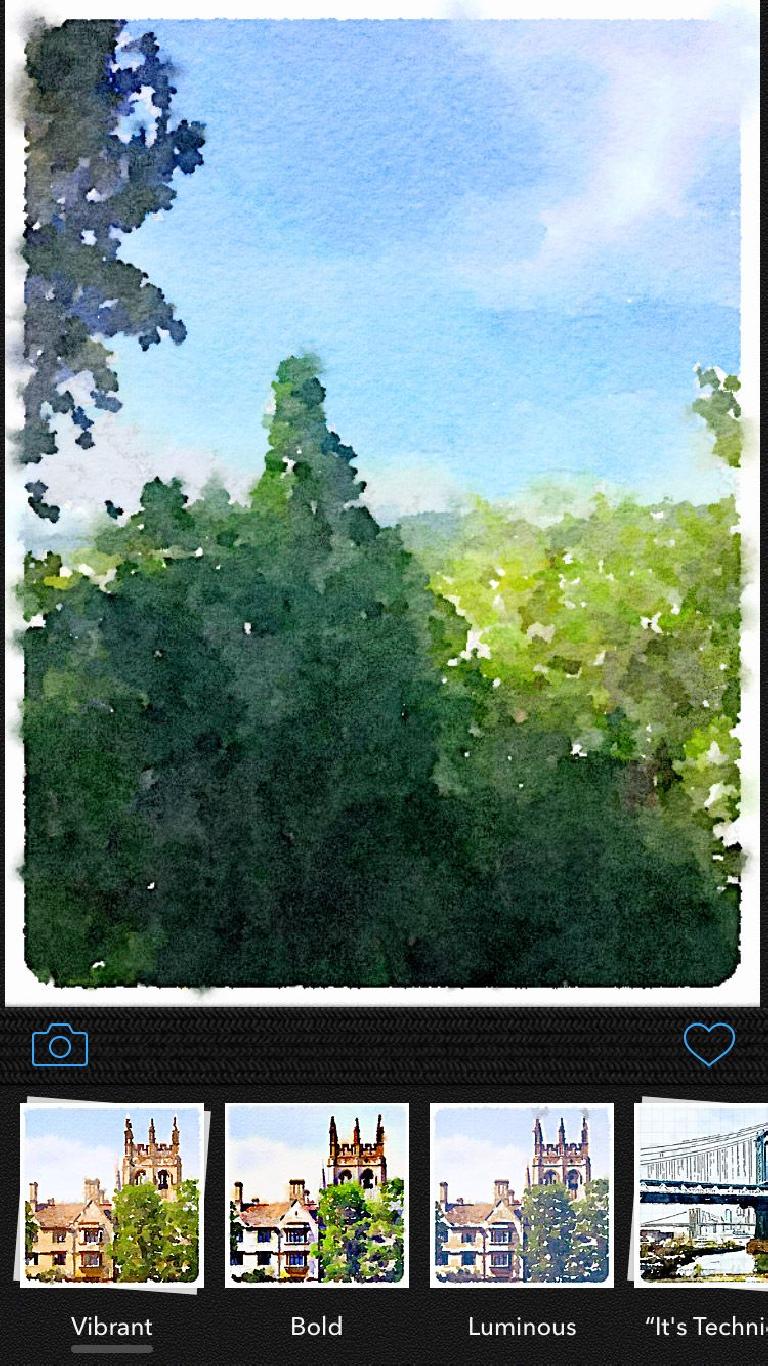 Yes, there are ways to create natural-media-style artwork in Photoshop and even in Illustrator. None of them produce artwork as beautiful as Waterlogue, however. Take a photo or load one you took earlier, then simply choose your favorite style. Keep looking to the right to access size controls, though these don’t make super-high-res artwork. Rather, they affect the size of the detail level of the painted artwork. You can also tweak the brightness and border of the result with controls further to the right. 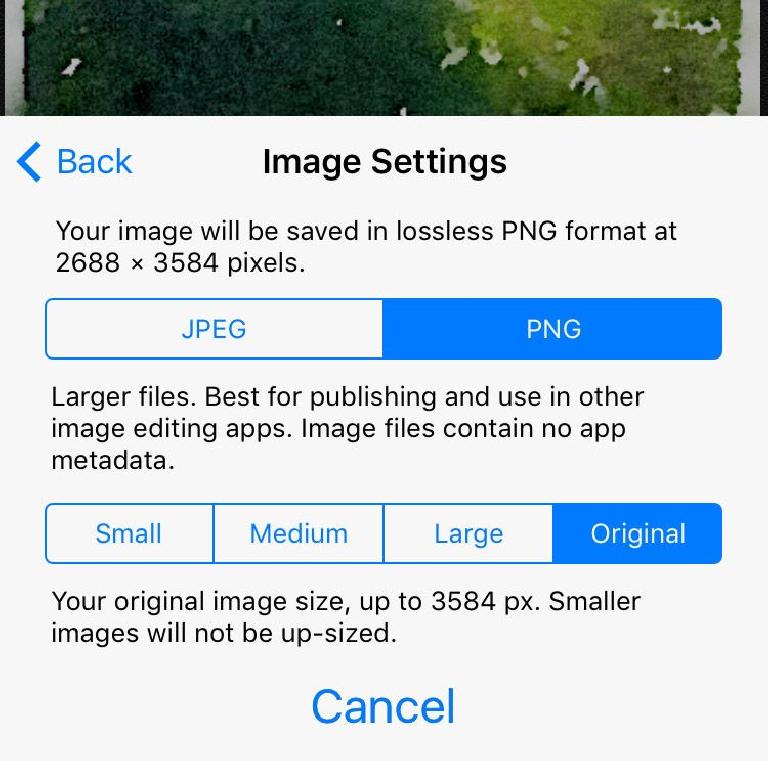 Press the Heart button to export, then choose Settings at the right of the lower set of icons. For maximum quality, choose PNG and Original, then press Back and press Save To Photos. 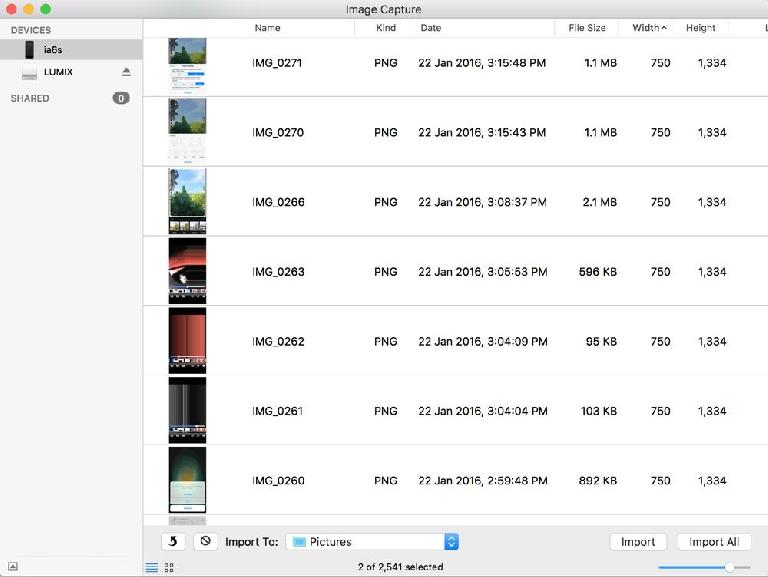 Image Capture lives in Applications > Utilities, and as useful as ever.

If you’re used to using iPhoto or Photos, you can connect your iPhone or iPad and let the import happen. If you’d rather just grab the photos directly, use the built-in Image Capture app and just drag the images directly to where you want them in the Finder. 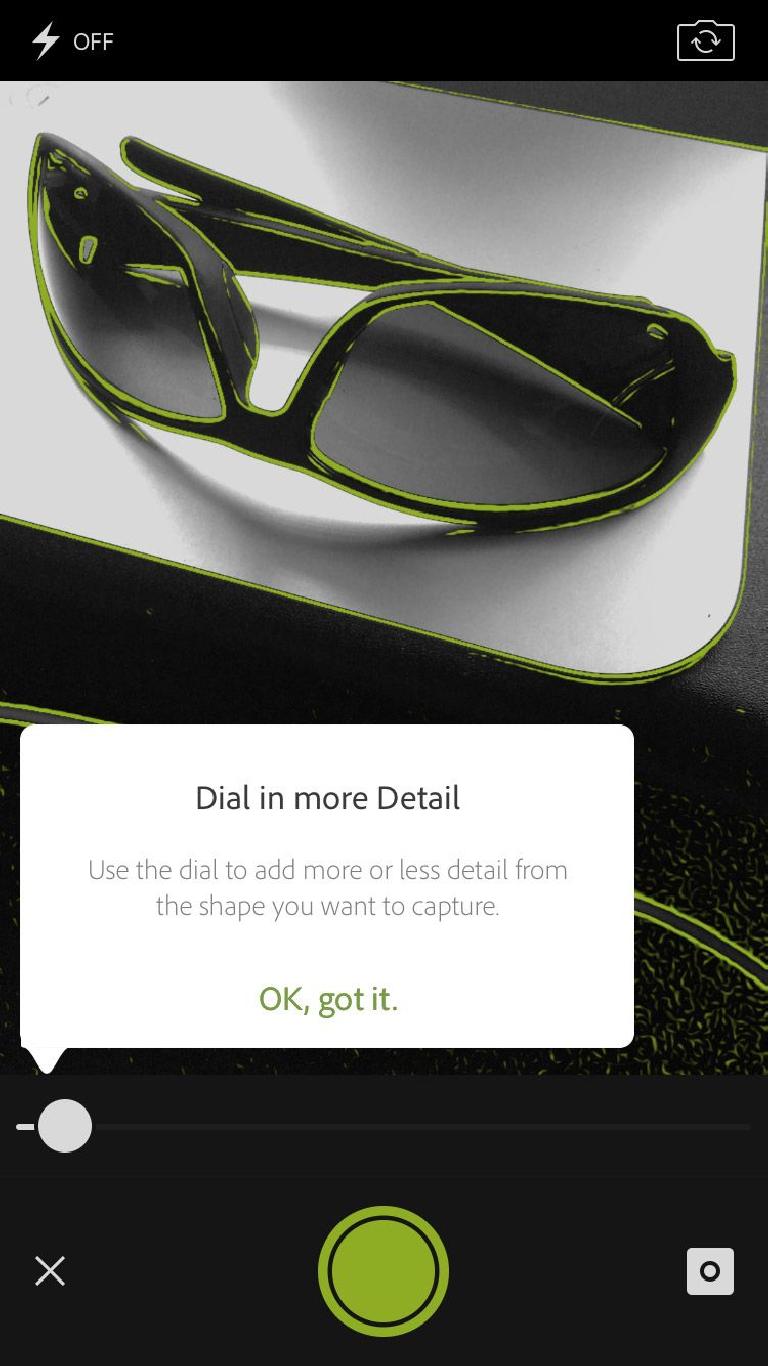 Adobe Shape offers instant vector tracing of anything you can see.

Yes, even Adobe have recognized the strengths of mobile apps in content creation, and have a selection of small apps for interacting with the real world in a more direct way. Adobe Shape lets you point your camera at anything and create vector outlines very quickly indeed. While the built-in Trace function can do this too, speed is the big winner here. Take a photo of a drawing or a real-world item, then watch as the preview trace outlines the areas of interest in green. Paint over areas you don’t want to include to turn them white, or use the switch in the bottom left to be able to paint them back in.

When you’re done, press the big tick and the outline will be sent to Creative Cloud, ready to be incorporated in your desktop artwork. Adobe’s other apps can also create unique artwork, and the range changes often—check out their other apps too.

Adobe’s apps are a great place to create many kinds of design, but they’re hardly the only place. Exploring different ways to make art is a great way to kick some creativity back into your workflow and some fresh life in your designs. Have fun! 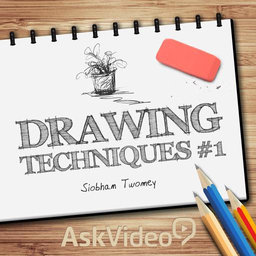 Dream It. Do It.
Do you want to learn Drawing Techniques 1?
Yes, I want to learn!
No Thanks, I just want to read the article.
Feedback
How are we doing?
We'd love your thoughts, feedback and questions regarding our new site. All feedback is appreciated!
We do not respond to this form! If you need support, please visit our support page.
Thank you for your input!
Your message has been successfully sent
Course Advisor
Don't Know Where To Start?
Ask A Course Advisor