All Articles Mac OSX
OS X Lion: Quick Tips for iCal
Richard Lainhart on Wed, December 28th 0 comments
Language
Getting to grips with some of the new features in Lion can take a little getting used to. Richard Lainhart shares some more of his essential OS X Lion Tips - this time focusing on iCal.

Following up on my recent Lion Quick Tips article for The Hub, here are some more tasty Lion Quick Tips for anyone who's upgraded to the new OS. Users new to the Macintosh will find some useful pointers here, and those Mac veterans who aren't completely comfortable with the many changes in the new OS will also benefit. This time around, we'll be focusing on the new version of iCal - let's get started.

iCal in Lion is much more like the iOS versions found on the iPhone and iPad, and so has instituted some changes that long-time OS X user may find... disconcerting. (Not to say annoying.) For example, when in Month view (which is what I always use), double-clicking to create a new event used to, by default, create a one-hour event. In Lion, the same action creates an all-day event, and this behavior isn't changeable. So, here are a couple of workarounds to let you create one-hour events. You'll need to learn some new routines, but once you do you'll have more more control over iCal.

First, if you switch to Week or Day view, double-clicking at a particular time location will create a one-hour event at that time. However, let's say that you, like me, don't want to switch views just to create one-hour events. Here are two other workarounds.

In Month view, double-click to create the event, then immediately start typing to name the event. If you also add the time to the event, like so:

Now hit Return, the time you added will disappear, and the event will start at the time you specified with a duration of one hour: 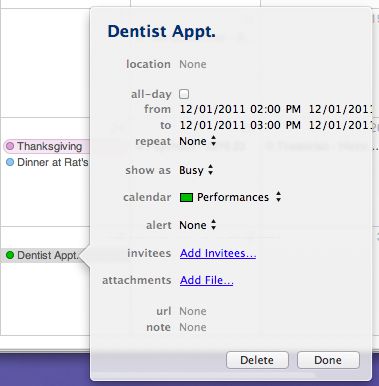 An alternate approach is, in any view, to type Command-N (or click the + button in the upper left of the Calendar window) to show the Create Quick Event pop-up.

Then type in the event with day and time, hit Return, and again you'll have a new event of one hour starting at the time you specified. If you don't specify a day, the event will be entered for your current day.

One thing I noticed while creating the events above - certain event types in iCal will automatically default to one hour, and will start at default times. For example, create a new event as described above, but type in "lunch" - just "lunch", then hit Return, and you'll see that the event not only defaults to one hour, but also starts at 12PM! This also applies to "breakfast" (which starts at 9AM) and "dinner" (which starts at 8PM, apparently in the European manner). If you're a person of regular, fixed habits, this is a handy shortcut.

No, that isn't a typo - iCal has long had a hidden Debug menu available, but in Lion a new sub-menu called Top Sekret has been added to it. This Top Sekret menu has one very useful command for those who prefer to work in Week view - the ability to change the number of days shown in Week view from the default 7 to 14, 21, or 28. This is useful if you want to see more than one week's worth of events at once, but less than a full month, and also because Week view shows a lot more detail than Month view.

To access the Top Sekret menu, you first need to enable the Debug menu. To do that, launch Terminal (in the Utilities folder in your Applications folder). When you do, you'll see a prompt in the Terminal window. After the prompt, type in the following text: defaults write com.apple.ical IncludeDebugMenu 1 exactly as shown here.

Then hit Return to enter the text. After that, quit and relaunch iCal to use the new settings, and now you'll see a Debug menu in the menu bar. Then choose Debug > Top Sekret > Days in Week View to change the default from 7 to one of the other values.

Once you've changed the default, you can hide the Debug menu again if you wish by launching Terminal again and entering:

to turn it off. That's up to you, of course - if you want to freely switch the number of days shown in Week view, you'll need to have the Debug window enabled.

And there you have some useful iCal tips. Stay tuned for another episode of Lion QuickTips, coming soon!

Dream It. Do It.
Do you want to learn Core Lion?
Yes, I want to learn!
No Thanks, I just want to read the article.
Feedback
How are we doing?
We'd love your thoughts, feedback and questions regarding our new site. All feedback is appreciated!
We do not respond to this form! If you need support, please visit our support page.
Thank you for your input!
Your message has been successfully sent
Course Advisor
Don't Know Where To Start?
Ask A Course Advisor