In this Logic Sound Design Quick Tutorlal, we'll be looking at how to create the chord stab sound heard in Dizzee Rascal's "Dance Wiv Me" (featuring Clavin Harris):

The chords we're going to recreate enter at 00:44 in the video. Here are the notes for the part as shown in Logic's Piano Roll:

Next, choose the Analog Saw Init patch from the Tutorial Settings category in ES2's patch list ; this tutorial patch will be a good starting point for our sound design.

Now, if you play the track with this sound, you'll hear that we're already somewhat close to the track's original sound, which tells us that it's sawtooth-based:

Listening to the original track, you'll also hear that it has a short, sharp envelope with no attack or initial decay, a full sustain, and a very short release. The Analog Saw Init already has such an envelope setting, so we'll just go with that and move on to dressing up our sawtooth.

It's often hard to tell in a fully mixed track what's going on in a part that's back in the mix, but it sounds like the original chord sound has a little flanging or other processing that adds some motion and thickness to the sound. One way to get that kind of sound is to add another oscillator, slightly detuned from the main oscillator.

With that in mind, enable Oscillator 2 by clicking on its On/Off number, set it to a regular sawtooth (not the Sync Sawtooth), and detune it up or down by a couple of cents by dragging on the '0c' under the tuning knob for Oscillator 2.

Next, drag the little square in the Oscillator Mix triangle to evenly mix Oscillators 1 and 2. Your settings should now look something like this: 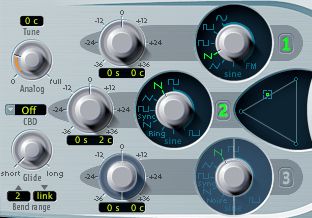 To make this sound a little thicker, let's add a third detuned sawtooth: enable Oscillator 3, set it to a sawtooth, and detune it by the same amount as Oscillator 2, but in the opposite direction. That is, if you detuned Oscillator 2 up by 2 cents, tune Oscillator 3 down by 2 cents. Be sure to mix in Oscillator 3 in the Mix Triangle so that all three oscillators are evenly mixed: 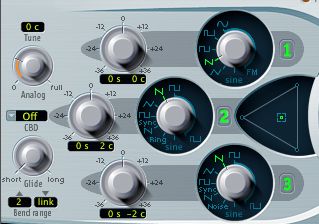 At this point, we're getting closer to the original sound, but ours is a little too thick right now. One good way to lighten it up is to run it through a high-pass filter to reduce some of the heavier lower frequencies. So, make sure your Filter stage is enabled by clicking on the Filter switch (it will turn green), set the Blend slider so it's all the way over to the left (so we only hear Filter 1) and set Filter 1 to Hi (high-pass). Now drag the Cut (cut-off frequency) knob to its middle point: 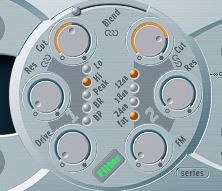 Preview your track; you should hear something like this, a somewhat thinner sound which is a little closer to the original track:

Now our sound has thinned out nicely, but still seems rather brighter than the original. So, let's remove some of that brightness with a low-pass filter. First, if you started with the Analog Saw Init patch, you'll notice that the Modulation Router is set so that the Cutoff for Filter 2 is being controlled with an envelope, which we need to disable before setting the cutoff manually. You can do that by either clicking on the Cutoff 2 target in the first Router slot and choosing Off from the menu, or by clicking on the little center circle next to the Modulation Intensity Slider to set the modulation amount to 0; it's up to you.

Next, set the Filter section's Blend slider to halfway, so both filters are active (the Filter section should already be in Series mode). Set FIlter 2 to 24dB and fat, then drag its Cut frequency knob down so it read about 0.8, which is about the 2 o'clock position: 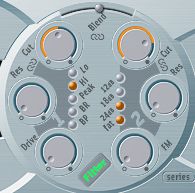 Play your track, and you should hear something like this:

We're very close now, but the original sound seems to have a little bit of stereo motion that we don't have in our version. One way to do that is to add some chorusing, which will both provide a bit more thickness for our sound as well as some slight stereo motion.

So, click the Chorus button in ES2's Effects section'"if it isn't enabled already'"then set Intensity to about the 3 o'clock position, and Speed to the 9 o'clock position:

Play your track, and you should hear something like this, which to my ears is close to the original sound:

And there you go. As always, you should experiment with all of these settings to see how they affect the sound. You may even find some variations you can use for your own tracks. Above all, have fun!

Richard Lainhart
Richard Lainhart is an award-winning composer, filmmaker, and author. His compositions have been performed in the US, Europe Asia, and Australia, and recordings of his music have appeared on the Periodic Music, Vacant Lot, XI Records, Airglow Music, Tobira Records, Infrequency, VICMOD, and ExOvo labels. His animations and short films have been shown in festivals in the US, Europe, and Asia, and online at ResFest, The New Venue, The Bitscreen, and Streaming Cinema 2.0. He has authored over a dozen technical manuals for music and video hardware and software, served as Contributing Editor for Interactivity and 3D Design Magazines, and contributed to books on digital media production published by IDG, Peachpit Press, McGraw Hill, and Miller Freeman Books. Previously an Adobe Certified Expert in After Effects and Premiere, a demo artist for Adobe Systems, and co-founder of the official New York City After Effects User Group, he was, from 2000-2009, Technical Director for Total Training Productions, an innovative digital media training company based in New York and California.
Related Videos
Comments (9)