Serious editors looking for the best and latest information about Final Cut Pro X should look no further than the FCP X Creative Summit. Organised by FMC, who also run the official training at NAB, this event combined talks (from feature film makers, workflow gurus and experienced trainers) with an expo to see and talk about new products, and a special, rare product demo on the Apple campus. Let’s take a look at how it all happened, in order. 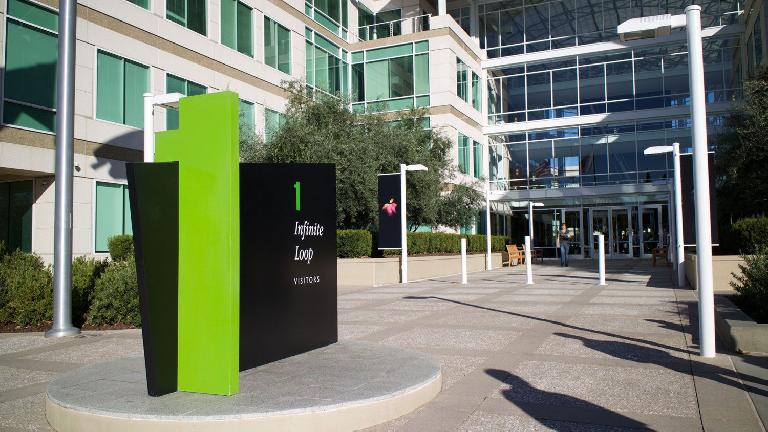 The day before a product launch, at Apple

As I’d flown in from Australia to California, I arrived on Wednesday 26 October, two days before the conference, to beat jetlag. A few others who’d travelled a long way did the same, and an impromptu dinner and drinks were had. I can heartily recommend arriving early if you can, to get a feel for a place, to get your head on local time, and to hang out with other early arrivals in a smaller group. It’s not every day you get to hang out with feature directors, well-known website owners and award-winning editors, let alone other trainers, and that’s one of the main strengths of the conference—simply being able to talk with other people who know what you’re talking about. 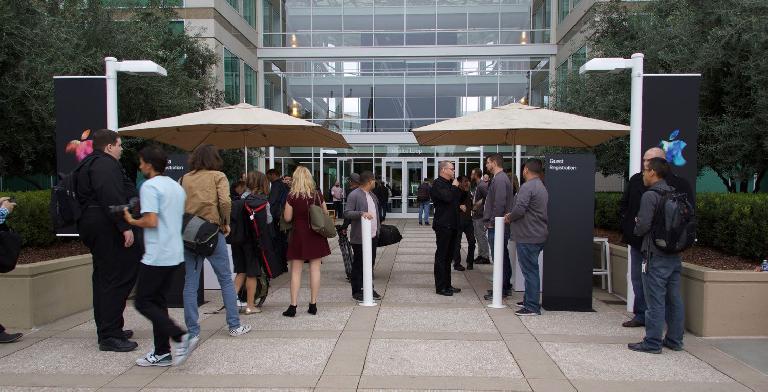 The day of the product launch at Apple

By happy coincidence (or perhaps not) the day before our conference hosted an Apple product launch. The new MacBook Pro with its new Touch Bar was shown for the first time, and FCP 10.3 was one of the key demos on the new hardware. Unfortunately, I wasn’t lucky enough to be invited to the Keynote, so I retired to the Apple Store on campus to watch the live stream, where a network problem meant that the stream was inaccessible. I sped back to my apartment, saw the new FCP X, discovered its secrets, and wrote a review which is live now.

The evening saw a much larger gathering of attendees, most of whom had now arrived. If you want to meet with and chat to the best known faces in the FCP X community, this is the place to be. It’s more focused and smaller than NAB, but no worse for it—when the BBQ burger place is just next to the hotel, it’s a whole lot easier to catch up with people. 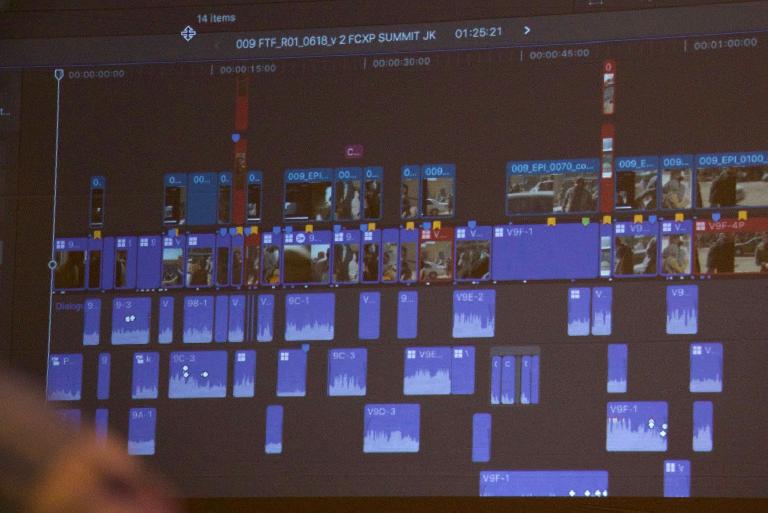 A part of a timeline in Whiskey Tango Foxtrot, as seen in FCP X

Coffee, pastries, and the official conference kicks off. There’s a buzz in the air, as a major new version of FCP X doesn’t happen every day, and we’re in exactly the right place to hear about all the tiny details.

After an introduction from FMC, the first keynote kicks off, and we get to hear from the directors of Focus and Whiskey Tango Foxtrot, Glenn Ficarra and John Requa, and its editor, Jan Kovac. FCP X let these filmmakers deliver their film with the effects way under budget as they could handle their own footage and their own effects. Avoiding the need to farm out dailies, handling simple effects right in the FCP X timeline, and managing your own FX pipeline add up to a massive cost and time saving.

Filmmakers still following old workflows on the basis that they “aren’t broken” are missing the point: that they could be much better. If you are planning a serious project, it’s often easier to build a whole new workflow rather than adapt an old one. Talk to some experienced FCP X workflow people first (Mike Matzdorff, Sam Mestman) and avoid some big mistakes. Metadata is a big part of the process, and FCP X lets you take advantage of it in a big way.

The second keynote, Pushing the Cutting Edge, saw Luke Wilson, Duncan Shepherd, Chuck Braverman and Ché Baker talking about their projects. Luke and Duncan talked about their work on a VR project with Paul McCartney, and about the immersive, emotive experience that VR can give. Ché talked about his indie feature film experience with Blue World Order, cut and colored within FCP X and premiering as I type. Chuck, a multiple Emmy winner and Academy Award nominee talked about his documentary production experience, including two O.J. Simpson docs, and how metadata was key in dealing with massive amount of footage. After a long chatty lunch, we headed to Apple, where we saw a presentation of FCP X 10.3, Motion 5.3 and Compressor 4.3, met the people in charge of Final Cut Pro X, and the developers who make it all possible. Sorry, but no photos of this part.

Here’s a quick video of the new MacBook Pro with Touch Bar:

We then got to see FCP X running on the new MacBook Pro with Touch Bar— which looks like a fascinating user interface device, quite different from what we’ve seen before and a great blend of macOS and iOS in some ways. A really rare opportunity, and many thanks to Apple and the organizers for making this happen.

Expo night meant that everyone got to see all kinds of cool products from sponsors, and many prizes were raffled off. Happily, I won an editing keyboard from Logic Keyboards—awesome. Happy day—it’s not every day you get to talk about shortcut keys for color correction with feature film editors, let alone visit Apple. 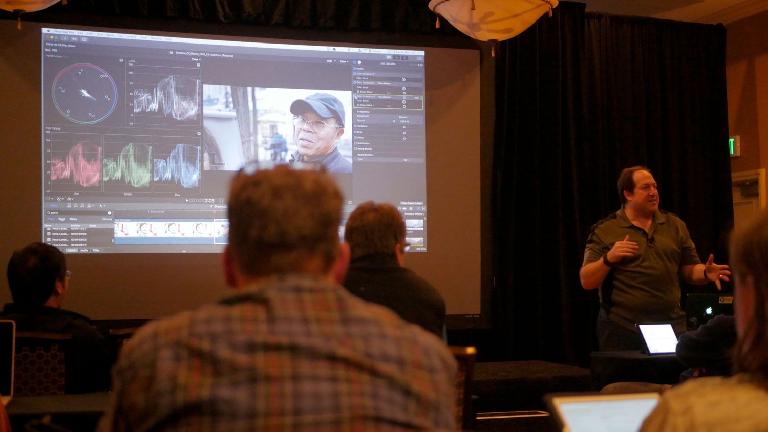 These two days were mostly split out into three streams, and finding the most appropriate  session at any given time was the main challenge. You could hear Steve Martin talk about how he organizes his audio libraries, how Mark Spencer works with Motion, how Philip Hodgetts works with metadata from transcripts, and sessions on managing the various tasks an editor or assistant editor faces from Gergana Angelova and Mike Matzdorff.

At the tail end of day 1, the streams collapsed and we all heard a keynote session from Lumaforge. Sam Mestman told us how he’s just taken a TV pilot shot on 6K RED and delivered a 4K DCP without external help, all based around a Final Cut Pro X workflow. Thomas Grove Carter cut a 60 second ad down to 30 seconds on stage, in just a few minutes, with all audio still in the right place

Next, a masterful display of real-world editing from Thomas Grove Carter, a collection of tips from Jeff Greenberg and Abba Shapiro, a more detailed session from Ché Baker about his film, and a session from Roger Bolton of Coremelt about the best way to track with mocha-based products. Through the conference, there was also technical information on Motion’s OSC and on VR from Alex Gollner, detailed sessions on editing, compression, color correction and multicam from Jeff Greenberg and Abba Shapiro, a practical session on how to build a glitch transition from Stefanie Mullen and technical support info from Alex Kaloostian. A clean workflow is critical to professional jobs, and the workflow discussions from Peter Wiggins of fcp.co (tight deadlines for broadcast TV) and Sam Mestman of Lumaforge (deep feature film workflows) were comprehensive and extremely valuable. Sam is definitely a guy to talk to if you’re planning a big project, and not just because his company Lumaforge sells great servers—he’s generous with his advice too. Sometimes, you have to take a selfie — with Sean Mullen of Rampant Design

Conferences like the FCP X Creative Summit are, in many ways, more fun than a massive event like NAB. The presenters were all knowledgeable and—the joy of a small conference—friendly and approachable. As more and more content shifts to online, what you can’t get at home is the personal connection with other editors, with product managers, with developers, and with experts. Even though I live on the wrong side of the planet to most of the action, it’s certainly something I’d do again. If you live closer than I do, definitely make it a priority.

Dream It. Do It.
Do you want to learn Color Grading?
Yes, I want to learn!
No Thanks, I just want to read the article.
Feedback
How are we doing?
We'd love your thoughts, feedback and questions regarding our new site. All feedback is appreciated!
We do not respond to this form! If you need support, please visit our support page.
Thank you for your input!
Your message has been successfully sent
Course Advisor
Don't Know Where To Start?
Ask A Course Advisor