All Articles News
Bring Your Stomp Boxes Into Eurorack World With The AI006 Stomp Box Adapter From Just $10
Hollin Jones on Sat, February 9th 0 comments
Incorporate your stomp boxes into your modular setup with ease using this fire and forget module, with prices starting at a crazy $10.

Portland, OR, USA – AI Synthesis has released its fifth module, the AI006 Stomp Box Adapter in both a built and guaranteed version, as well as in kit and PCB/Panel format. The AI006 stomp box adapter provides simple, inexpensive  “set and forget it” conversion between modular signals and guitar level signals, allowing users to get the most from their stomp boxes when interfacing with their modular system, in only 2HP. 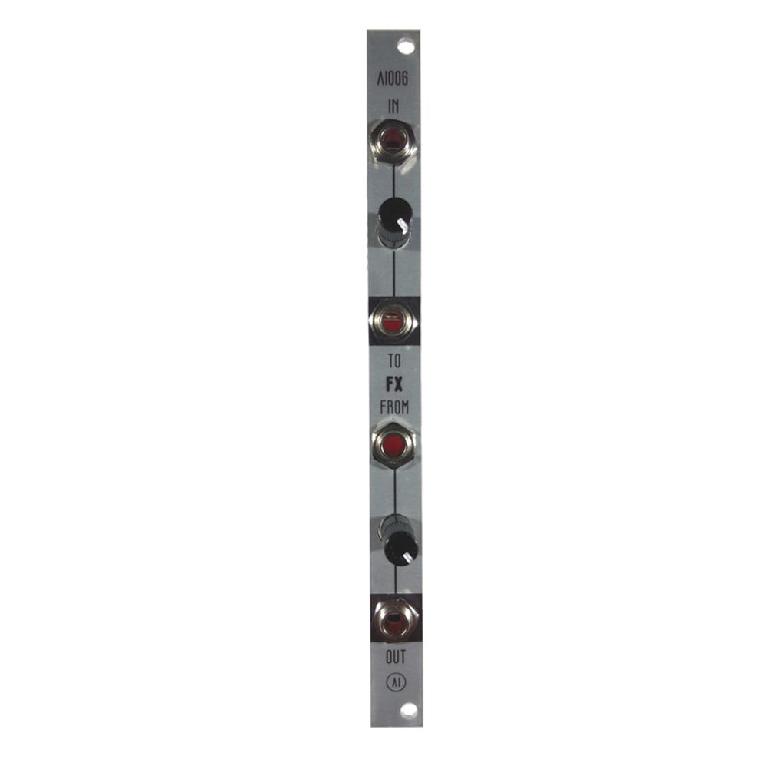 Following the tradition of the other eurorack modules, the AI001 Multiple,AI002 Mixer, and AI003 Looping ADSR, the module has a full video how-to build guide. Unlike some DIY companies that focus solely on providing kits, AI Synthesis has an educational mission and our kits and documentation are aimed at those who have never held a soldering iron. PCBS are professionally manufactured, and all panels are aluminum and designed by Grayscale.

The AI006 Eurorack Stomp box Adapter is an updated take on a classic utility circuit that converts the higher signal levels of a modular system to be converted to the lower level signals that most stomp boxes are designed for.
The AI006 stomp box adapter solves two problems. From the Synth input to the “FX”out, the signal is reduced by a factor of 20 to match the signal levels expected by most stomp boxes. From the “FX” input to the Output, the signal is increased by a factor of 20. Passive attenuators are present on both the send and return in case the input or output levels are too great.

This DIY stomp box adapter kit will not only familiarize yourself with IC Chips, Capacitors, and Resistors, it will also add a key utility module to your DIY Modular Synthesizer. This is an ideal kit for a beginner learning DIY electronics, and requires no wiring at all! All parts are soldered directly to the PCB for ease of building and can be built in under an hour.

We recommend this kit as the second module you build. It is easy, and can be built in a single sitting. If it works, you are ready to build other modules.
The Eurorack Kit Contains everything you need to build your DIY Analog Synth