LittleBits is a company that offers several kits and devices to encourage creation, artistry and technological skill. From Gizmos and Gadgets to homemade home automation, LittleBits has quite a lot of different tech assembly projects for young people to attempt. When the gadget-creating company partnered up with Korg to offer a Synth Kit, some folks in the music world began to take notice. I was given a LittleBits/Korg synth kit of my own for Christmas (my friends ‘get’ me), and I was excited to build my first ever synthesizer from parts. I decided to document the experience and share!

Step One - In the Box 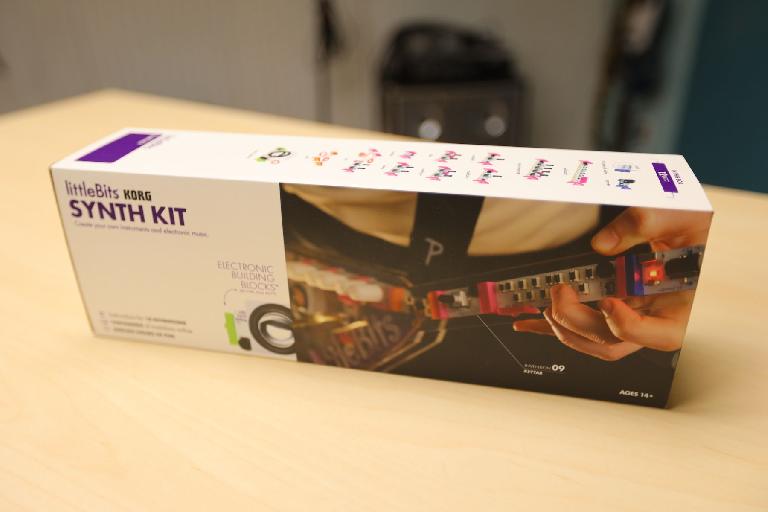 The Synth Kit is packaged in a very ‘Apple like’ way. It’s compact, there are photos of each component, and the box can even be repurposed as a backdrop to mount the parts on and create a desktop synth. Most importantly, it’s not imposing at all, and makes the prospect of building a synthesizer feel less intimidating for folks out there (like me) who are all thumbs and terrible at building things. I can debug lines of code with the best of them, and I can recognize most major virtual instruments simply by sound… but I’ve made many an embarrassed call to IKEA after completely destroying a piece of furniture when trying to put it together. I truly suck at building stuff, and I figured if I can make this work, anyone can! 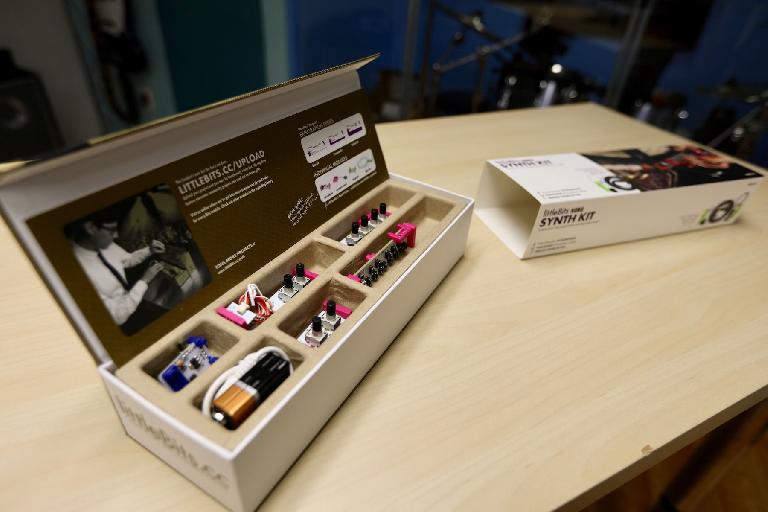 There’s no plastic baggies or jumbled up parts to be found in the LittleBits Synth Kit. Every element of the synthesizer is clearly labeled and lives in its own little compartment. There were two levels of parts, and after taking everything out I actually started to get really excited. I wouldn’t need any kind of index or parts list, everything was marked well and matched the photos on the side of the box. 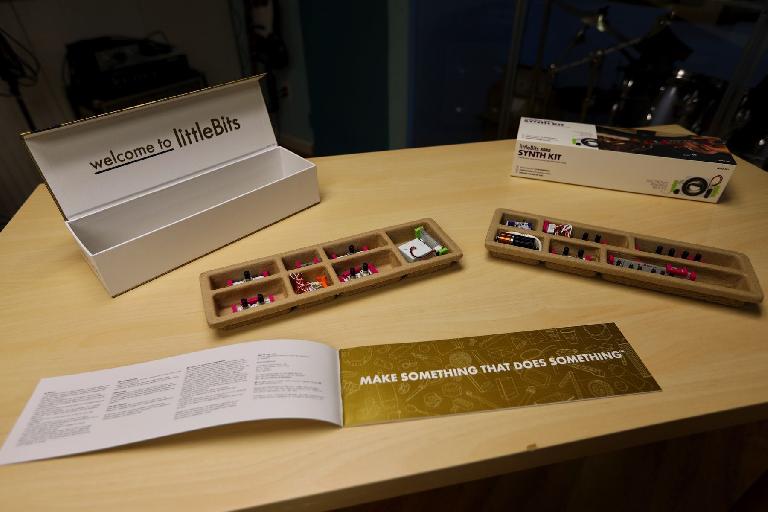 The Synth Kit comes with a very easy to read and concise manual. It’s clear that younger folks are the main market here, but honestly… I appreciated the simple instructions. It put me at ease and in a comfortable, creative frame of mind for the work ahead of me.

The first thing I noticed is that all of the pieces were magnetic. They snapped together in a fashion that I was familiar with, and was very reminiscent of the Palette system that I use to control my DAW / Photo / Video editing programs. Each component has magnetic connectors on both sides so you can mix, match and snap them into place with ease. It really encourages experimentation and is clever design. 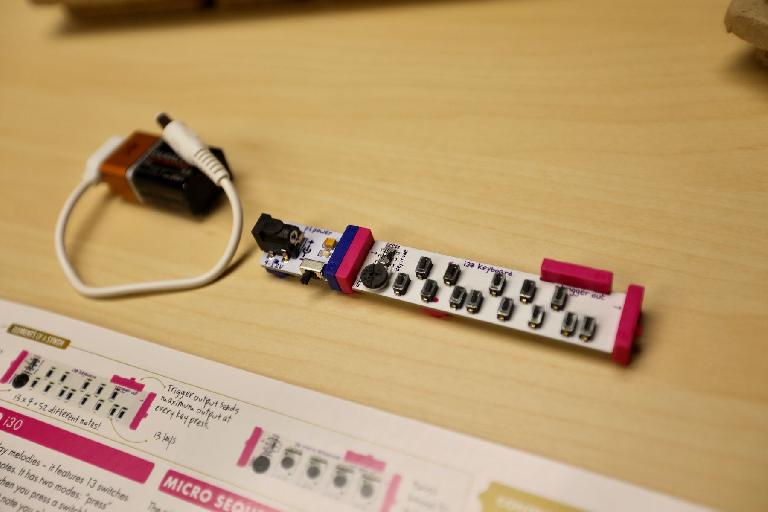 I almost started things off with the keyboard in front of me, and then I heard the voice of Steve H, our publisher here at Ask.Audio, hovering over my shoulder like Obi Wan Kenobi. “Put that thing away, Matt.. You don’t need a keyboard to make a synth…”  After a little Jedi encouragement, I opted to start with the basics: power source, oscillator, speaker. I was pleased to find that a 9V battery was included (really!). I hooked up the battery to a ‘power module’, connected that to an ‘oscillator module’, then connected that to a ‘speaker module’. I flipped on the power switch and heard a square wave right away. 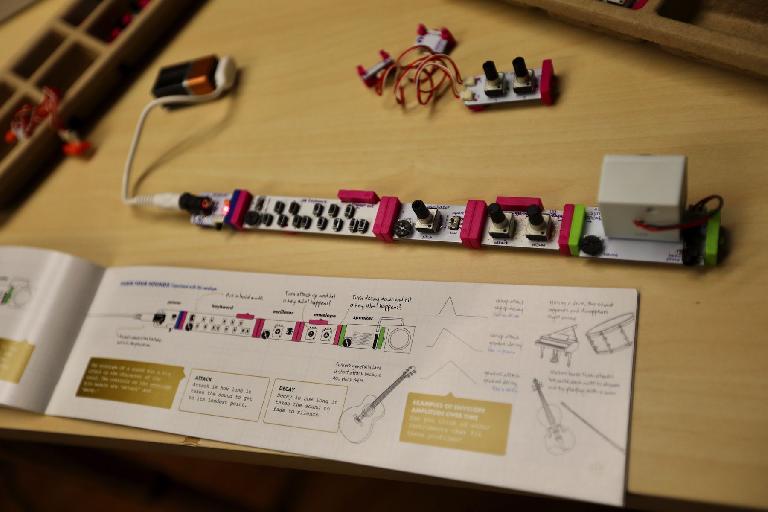 It was very satisfying how fast I was able to get to this point, so emboldened by my early success I opted to add in the keyboard and an envelope. The manual confirmed my suspicion that the typical synth signal path would work fine - a keyboard trigger module, an oscillator, then an envelope, all connected to the speaker. It all worked as expected! The keyboard module itself had some dials and switches to control the gate function of the keyboard as well as the octave.

I shaped my sound with the (amp) envelope and toyed with the oscillator module a bit. There’s a switch to choose between saw/square wave, as well as fine tuning options. By this point, I completely forgot I was writing an article and it became really fun. I decided to obey my inner Steve H and ditch the keyboard for something a little more fun. There was a second oscillator module in the box, let’s see if I could modulate one oscillator with the output of another! A magnetic click or two later and I was creating some modular-like synth tones from this little pile of circuits on my desk. 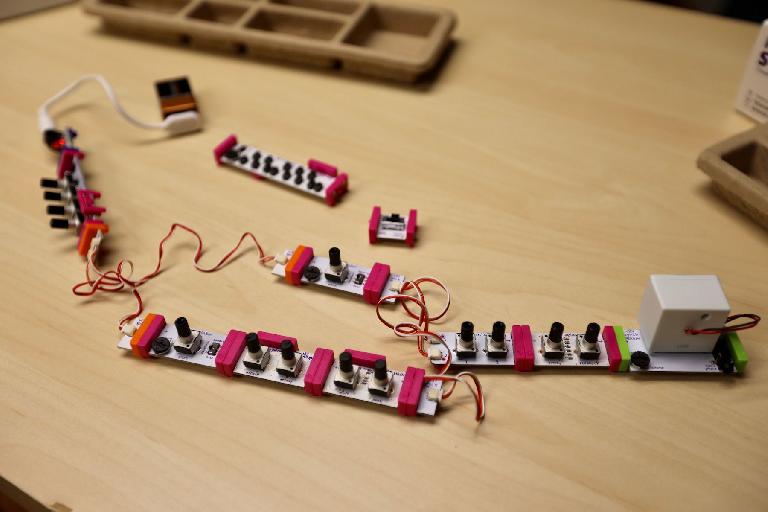 By now in my own mind I was basically feeling like Bob Moog himself (I really, generally, can’t build a darn thing - this was quite satisfying). I decided to utilize the splitter module and split the keyboard output to a second oscillator, bringing it all back together with a mixer module, right before the delay module I had just inserted.

As I added more and more modules, every now and then the magnetic connections would get a little wonky, but pressing all of the modules firmly down on the table fixed this. I began to see the benefit of mounting these to or inside the box. I swapped out the keyboard for the sequencer module and added a simple 4-step sequencer. All in all, it was a successful day.

I had a ton of fun with the LittleBits/Korg Synth Kit. You could consider this an entry level experience to modular synthesis (minus the rack), or you could think of it as a beginner’s engineer kit. Either way, it delivers on its promise of both fun and creativity. If you’ve never tried synthesis, this is a great way to get started. If you’ve never built something and want an easy win, this thing is for you. If you’re an accomplished synthesist and want to see a unique piece of gear that can help you break down synthesis concepts to civilians or young folks, the Synth Kit is a cool way to get it done for sure. 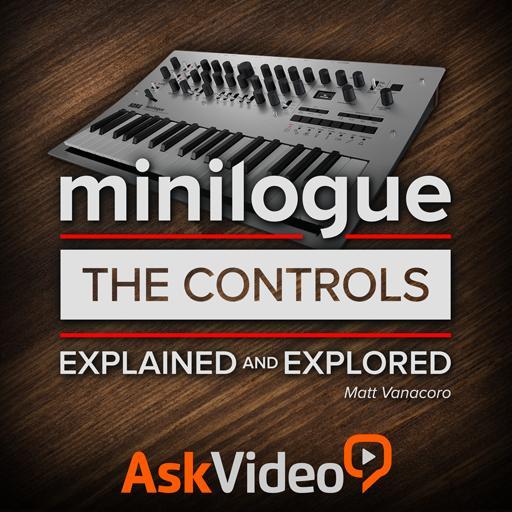