All Articles Recording & Production
Cultivating Emotion in Your Vocal Recordings and Productions
G.W. Childs IV on Sat, November 16th 0 comments
Language
Producing memorable music is more than writing great lyrics and music, making pristine recordings and mixing the track with precision. Performance, emotion and feeling are crucial for vocals too.

There are many elements within a song that ultimately attract a listener. This is especially true when a listener chooses to listen to a song more than once. After all, we’re in a period of time where music is everywhere and there are millions of songs and artists to choose from.

The elements within a particular song that cause the listener to come back again can vary from listener to listener. For example: Someone may like the drum beat, where another person may like the vocals. And, while the drum beat listener and vocal listener are both there for different elements, there is still one element, sub-consciously that both listeners will agree on- The vibe, feel or emotion within the song.

If the emotion is allowed to shine through within the song you will have someone listening to your song more than once.

Song writing and creation, like painting, poetry and any other intellectual art, despite what any one particular artist may say come places deep within the human soul. The song may be an emotional snapshot of what the artist was feeling when they wrote the song. Or, the song could be a depiction of something that the artist felt strongly enough about to showcase within song. Which ever the intention is, if the emotion is allowed to shine through within the song, past production, past other instruments, past the drum beats, you will have someone listening to your song more than once.

In my experience, it’s in the earliest stages of the writing process when a song is at its peak of emotion. The ink is still fresh on the paper, and so is the intention behind the song. There’s also only a small amount of instrumentation at this point. This leaves the vocals in a nice spot usually, and whoever wrote the lyrics will usually be emotionally charged about what is going to be sung. If the singer wrote the lyrics, the emotional charge will be even doubled because it’s deeply personal.

I’ve always felt that it’s the songwriters duty, at this point, to really assist the singer in building a connection with the song and the lyrics.

If the singer didn’t write the lyrics, I’ve always felt that it’s the songwriters duty, at this point, to really assist the singer in building a connection with the song and the lyrics. But, only if the singer asks. After all, skilled singers generally have a fair bit of empathy and have learned to create their own connection with a piece of work. Forcing your own viewpoint and emotion can muddy the connection that they are making from their own perspective.

I’ve found that when I work with vocalists, I’ll give them a few days to get in to the song and form a relationship with it on their own, without me around at all. Alone time spent with anything builds a connection to something. When a third party connects with your music, even on the production end, they now have a personal stake in making the song as great as you know it can be. This is huge, and it will ultimately come out in the performance.

Once the bond has been made, it’s time to record. This is my favorite part of recording a new song- The first vocal takes. This is especially exciting to me when I’m working with a vocalist, because I get to hear and feel their take on my lyrics and how they interact with the musical accompaniment.

When working with a vocalist, I generally like to create a physical environment that keeps the the vocalist as comfortable as possible. When someone is comfortable, they tend to give some of the best performances. They feel that they have the ability to express their feelings fully, and this is a huge win for your working relationship with this vocalist for the future and a huge win for the recording. 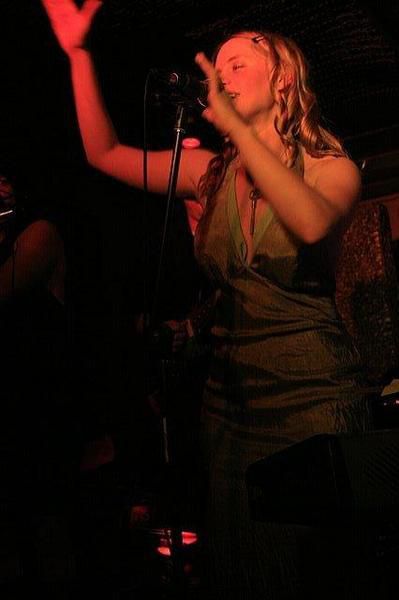 When someone is comfortable, they tend to give some of the best performances. (Pic of Lynda Arnold).

Generally, I like to get the main vocals recorded in one session. And then schedule a second session where the vocalist comes back in an lays down the harmonies. After the first session, I’ll email the rough recording to the talent, and give them a few days to create some harmonies. Or, I’ll create harmonies with Melodyne, send them this recording and let the vocalist learn the harmonies I’ve created.

After the vocalist is gone, this is another treasured moment where I get to decide what I like, and don’t like. This goes for instrumentation and vocal recordings alike. And, this is the place where I really begin asking myself the question, “Does this add to the emotion?” every time I add something new, or take something away.

If I’m still getting chills, I know I’m on the right track.

After all, with computers, it’s really easy to add track after track of new instrumentation, as well as stack tons of vocal effects. Personally, I tend to spend more time with compressors, and EQs at this point. I’ll focus on making the vocals sound as intimate as possible. While I work, on making the vocals sound great, I’ll notice if I start humming anything new, or hearing anything new. Do I hear a lead melody? Do I hear a crash cymbal in a certain spot? This approach helps me produce more organically.

This is also the time where I take a lot of breaks. One ten minute break on each hour. Coming back from each break, I’ll take a listen and note the emotion levels. If I’m still getting chills, I know I’m on the right track. If I feel like I’m losing the emotion, I’ll refer back to the earliest recordings of the song. This is where you can, a lot of the time, find what you lost through hours of editing. And, if you really feel like you’ve lost it... Put it to bed and come back the next day!

These are some helpful tips I’ve learned over the years. In some cases, I learned them the hard way. The main thing to remember is that just because you wrote some emotional lyrics, doesn’t necessarily mean that they’ll be recorded emotionally. Capturing a performance can be tricky work. But, if you’re smart and considerate to the needs of your talent, or to yourself, you’ll be amazed at what you can get on tape.