All Articles Controllers
Here's How To Use Multiple Game Controllers To Create A Cool Musical Performance
Hollin Jones on Wed, December 20th 0 comments
You might not have known that game controllers make the perfect triggers and controllers for samples and effects - but they do! Here's how it works, with many live examples.

Sometimes it's great to get a completely new perspective on making music by approaching it in ways you might not have though of before. In this short video from the course Controllerism 101: Making Music With Game Controllers, Moldover gives you a live action, hands-and-feet-on demo of using some of his favourite game controllers to trigger musical sequences and samples.

By setting up his foot-based controller to trigger samples and a joystick (yes, a game joystick) to control glitch effects on the master bus, he is able to quickly and easily perform a cool sequence and punch in variable effects much like you might do with a DJ setup, except using totally different kinds of controllers. You'll also see a power glove and several pedals connected to multiple effects on individual tracks. There's even a Nintendo motion controller thrown in as well! So check out this video and the rest of the course for a fun and enlightening look at how game controllers really can add a whole new aspect to your musical life!

There are a lot of good reasons to use gaming controllers to make music. They’re not too expensive, they can really ignite your creative juices in the studio, they’re a lot of fun… not to mention they look totally cool on stage! And there are so many of them to choose from: Dance pads, Atari 2600 joysticks, Nintendo’s Power Gloves, Wii Remotes, steering wheels… In this course, Matt Moldover (the man who invented the terms “controllerism” and ”controllerist”) reveals his non-traditional approach for “playing” music with game controllers.

After giving an overview of the gaming controllers used in the course, Moldover explains the important concepts and terminology required to start making music with gaming controllers. You learn how to hook up the controllers to your computer, and how to translate HID (Human Interface Device) commands into MIDI commands that your DAW can understand. Moldover also demonstrates how to get creative with MIDI mapping inside Ableton Live, using macros, racks, and MIDI devices, and how to use Max for Live for what he calls “data massaging”. Next, using plenty of musical examples, Moldover reveals all his secrets … You learn how to pitch shift vocals with a game steering wheel, how to trigger samples and loops from a dance pad, how to control an arpeggiator with a Wii Remove, how to use Arduino to create glitch effects, and a lot more!

So watch this course and get deep inside info from the “Godfather of Controllerism" himself, Matt Moldover, and start “playing” music with your game controllers! 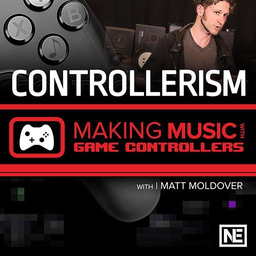 Dream It. Do It.
Do you want to learn Making Music With Game Controllers?
Yes, I want to learn!
No Thanks, I just want to read the article.
Feedback
How are we doing?
We'd love your thoughts, feedback and questions regarding our new site. All feedback is appreciated!
We do not respond to this form! If you need support, please visit our support page.
Thank you for your input!
Your message has been successfully sent
Course Advisor
Don't Know Where To Start?
Ask A Course Advisor