All Articles DJ & Live Performance
How to Revitalise Your DJ Mixes Using External Analog Effects
Sara Simms on Wed, August 26th 0 comments
Language
If you want to stand out from the crowd and help your DJ mixes sound and feel deeper then it can be worth adding external analog effects to your set. And it's a lot easier than you might think...

If you're getting weary of simply mixing two records together, it's time to delve a little deeper and do more during your sets. One way you can spice up your DJ sets is by adding external effects. Curious about how to get started? Here's a how-to guide that includes examples of analog effects that would work well for DJs and details how to set them up with your mixer. 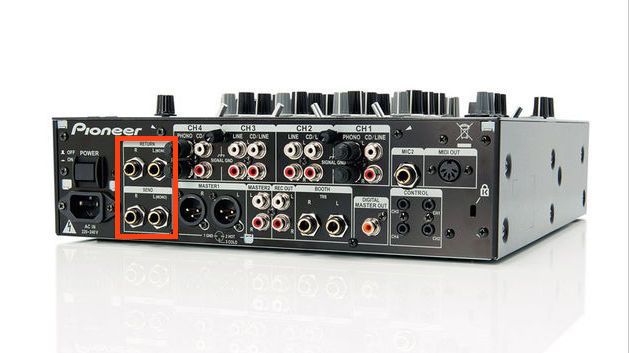 There is a whole world of effects that can be useful for mixing and used creatively to take your DJ sets further. Here's a few examples of analog pedals that would sound great paired with your tracks. 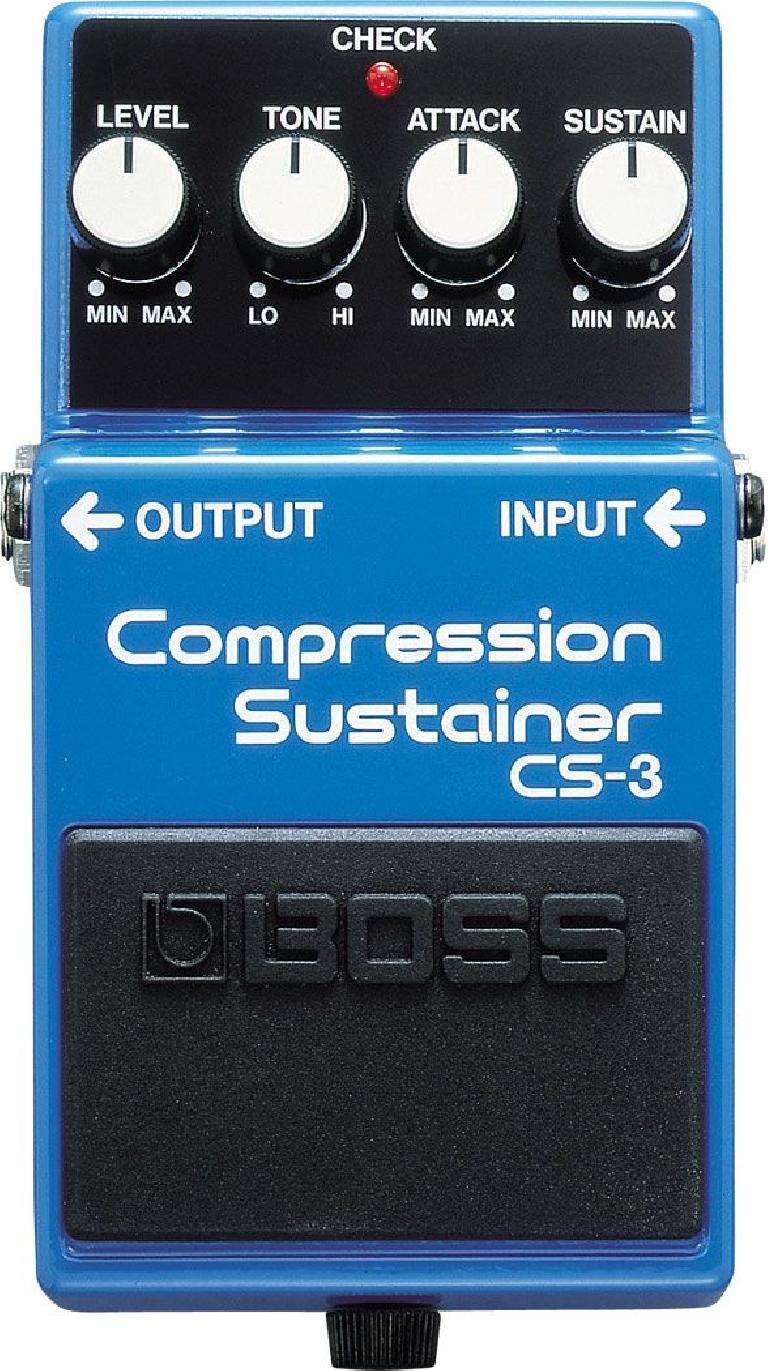 Compression pedals create sustain without adding distortion and control dynamics. Compressors will help your drums to pop through the mix and an analog compressor would help a drum machine (e.g., the TR-8) or stems to cut through. The BOSS Compression Sustainer CS-3 pedal is a solid choice for a signal conditioner pedal; it compresses louder signals and provides smooth sustain.

Echo and Time Based Effects

Echoes and Reverbs are classic effects that will sound great on drums and percussive rhythms. You can also try applying these types of effects to a drum machine, like the Roland TR-8. Echo and time-based effects tend to work best when applied to parts of the track that are stripped down and have some space in them.

Reverb is a resonant sound that's electronically produced to create artificial acoustics and mimic the sound of large spaces like big halls and churches. BOSS's Digital Reverb, the RV-5 offers six of BOSS' best reverbs and combines them together. It's an interesting pedal for DJs as it offers spring and gate reverb and there's a modulate mode that detunes the reverb sound to add extra space. 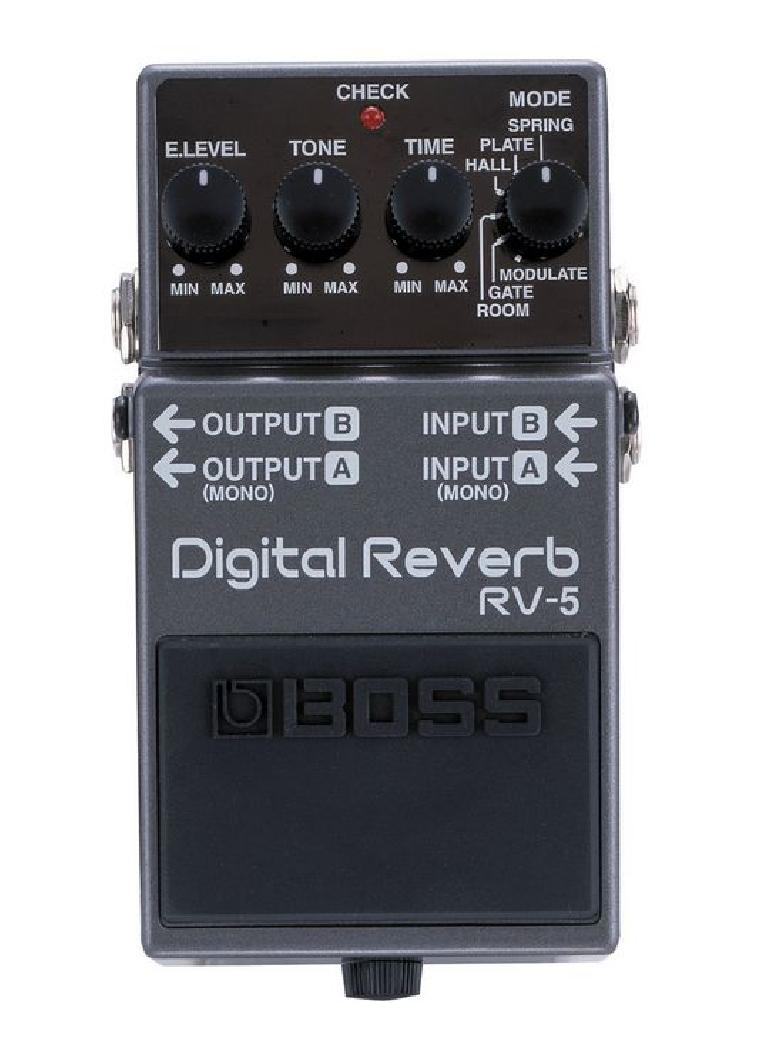 If you're like to create tripped out breakdowns or buildups, you'll definitely need a delay pedal in your arsenal. BOSS has two great pedals for this; the Digital Delay DD-3 and the Digital Delay DD-7. While both pedals will provide high-quality sounding delay, one of the main differences is the DD-7 can be synched to the tempo of your track, while the DD-3 cannot. If you prefer the sound of crazy delay that's out of sync with your track, the DD-3 might be a good starting point. If you want a delayed sound that's more in time with your tracks, the DD-7 would be a good bet. 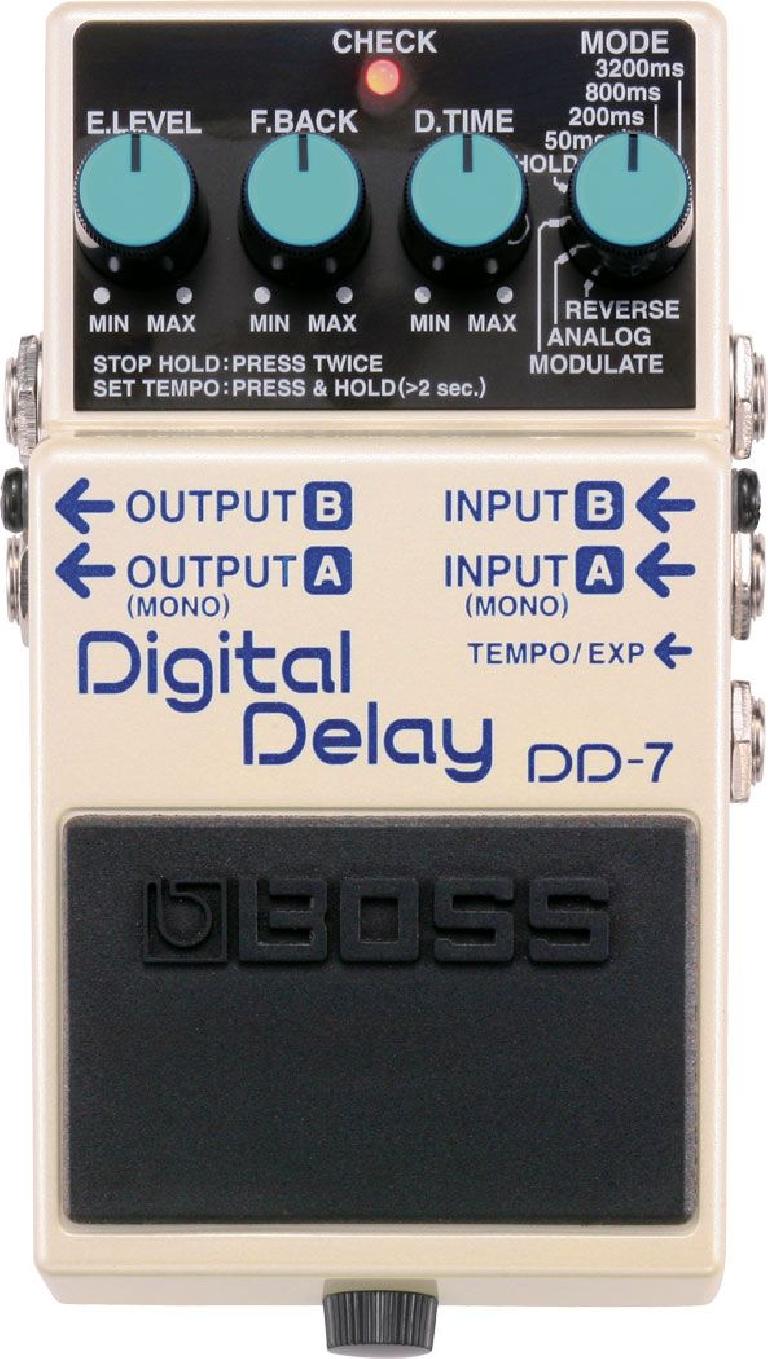 The Tera Echo TE-2 from BOSS is a beautiful pedal that combines delay and reverb together to produce a new stereo ambience effect. It's capable of creating sounds from washing slap backs to filtered delayed sounds. It uses BOSS' multi-dimensional processing and provides a wide range of sound adjustment with a few simple controls. This would be a great pedal to incorporate into techno or deep house sets. The BOSS TE-2 has stereo inputs and outputs for wider, wilder psychedelic effects. 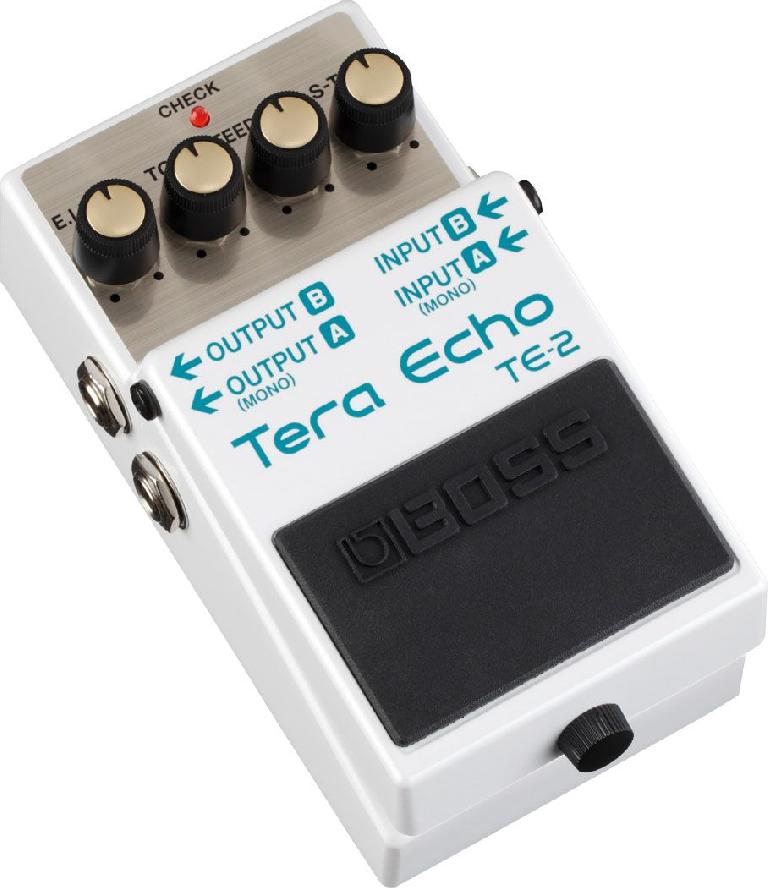 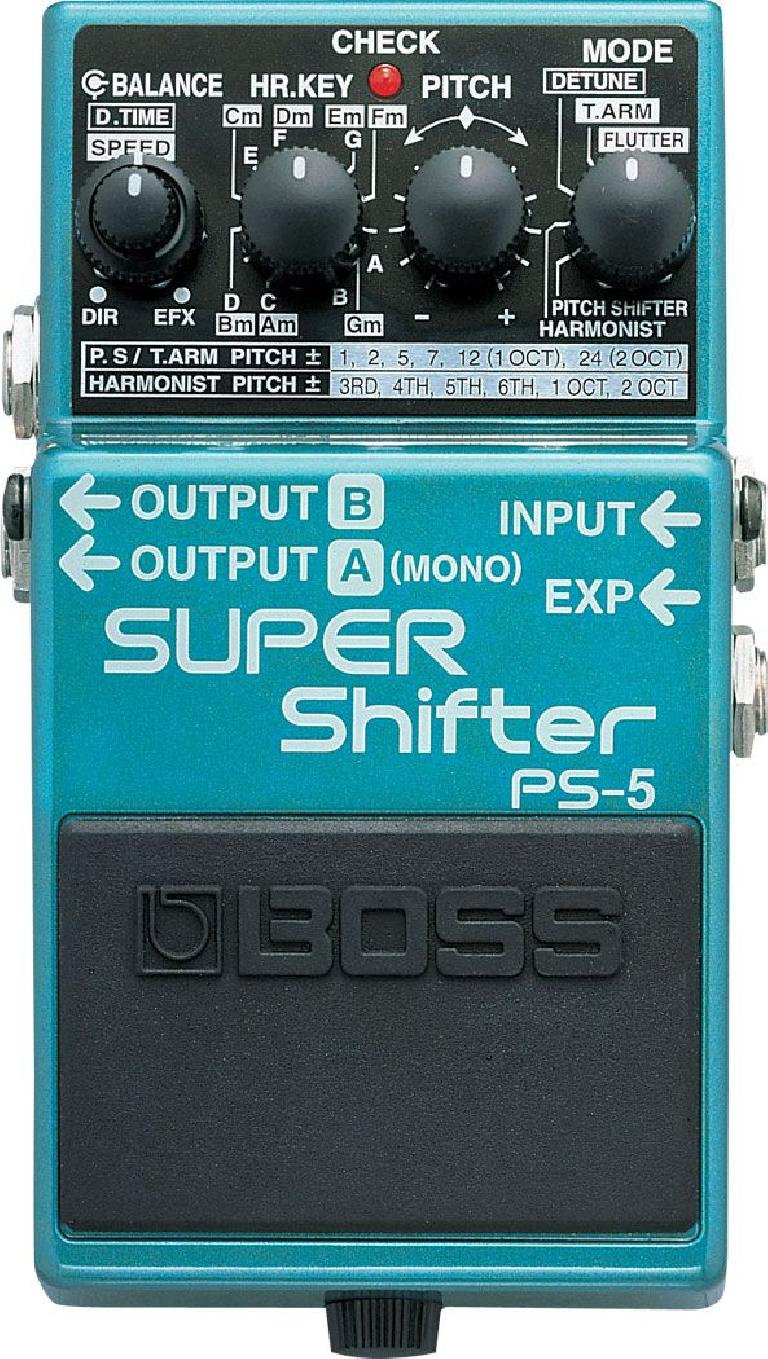 Pitch Shifters use digital technology to generate notes other than the ones that are input into the pedal. These pedals can be set to specific intervals, like a third or a fifth and they will play a note that is the chosen interval from the note that is input. This is a very unique type of effect that could potentially add interesting harmonies and accents to parts of a DJ set. BOSS used to manufacture a pedal called the Super Shifter PS-5 that has been discontinued but may be worth hunting down. The PS-5 has been replaced by the Harmonist PS-6, which combines four pitch shifting effects in a stompbox. 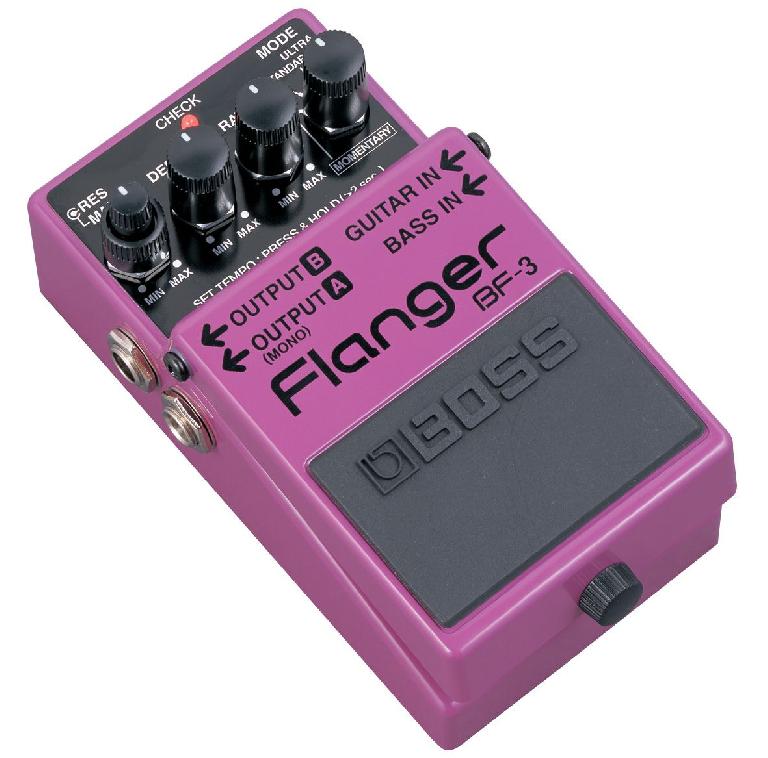 Flangers are usually used to create a sweeping, jet plane type of sound. They work by delaying the sound slightly and altering the audio over time while you're playing. This makes the harmonics cancel each other out and produces the sweeping sound. When used in a DJ set, flangers can sound pretty sweet on single drum tracks, like ride cymbals. If you can find one, the BOSS BF-2 Flanger (now discontinued) is a classic flanger with four simple controls that could be used to make killer sounds during a set. The updated version of the BF-2, the BF-3, is a flanger with new 'ultra' and 'gate/pan' modes that can make swirling sounds you won't hear anywhere else.

The order you put your effects pedals in will determine the overall sound that is produced. Pedals react to the input that is fed to them and it's best to invest some time and experiment to discover the best order for your own personal setup. Here's an example of a effects chain that could work well:

In this arrangement, each pedal will perform fairly naturally and produce the desired sound. If you have multiple pedals from each category, try swapping the order of pedals in each of the categories to see how this affects the overall sound. Placing your pedals in a different arrangement will sound completely different and may produce better sounding effects. It's best to set aside some time to really learn how your pedals can complement your tracks, stems and individual drum samples. Learning to use analog effects will give your sets a unique sound and add an extra dimension of enjoyment to your play time on the decks.