All Articles Review
Review: Intellijel JellySquasher Analog Compressor & Tone Shaper Eurorack Module
Scott Riesterer on Thu, May 25th 2 comments
This single channel analog compressor and tone shaper is affordable and capable of everything from subtle to extreme sound coloration. Naturally, we couldn't wait to put it through its paces...

I have to admit that I wasn’t terribly interested in this module when it first came out. I suppose this is partially because I have grown used to getting my compression from software plug-ins rather than hardware. There’s some great analog emulations out there, and software has a level of precision that is hard to beat. At least that’s how I felt until Danjel gave me a demonstration of an Acidlab Miami running through the Springverb into the Jellysquasher. He was able to quickly dial in this gritty, breathing, monstrous, dub techno tone from a simple drum groove and I was blown away. Toms transformed into growling synth swells. After that abrupt about-face of opinion I was eager to get my hands on one. 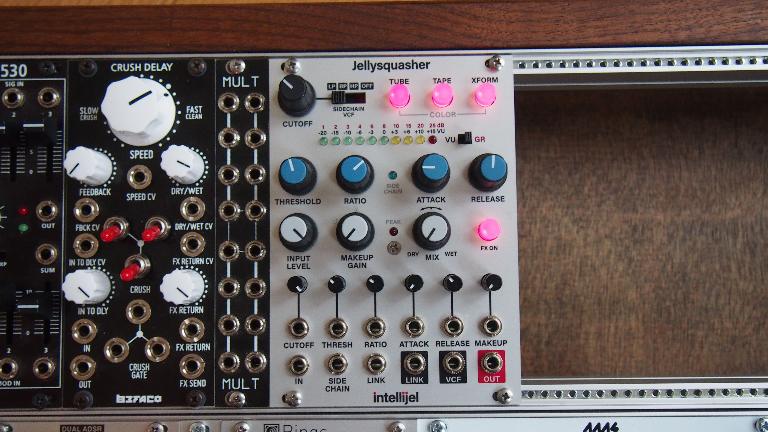 The Intellijel Jellysquasher is a single channel analog compressor and tone shaper. A compressor is a device that controls the volume level of a signal. If the signal becomes louder than a set Threshold, the volume of the signal is reduced according to a Ratio. In the case of the Jellysquasher, the threshold ranges from -40 to +17dB, and the Ratio can be set anywhere between a subtle 1.3:1 all the way to “infinity”, or hard limiter to really crush the signal. The speed that this reduction is applied is called the Attack, and the Release is the relaxing of this reduction.

A Makeup Gain can then raise up the overall volume to compensate for this reduction in level. Conveniently, the Jellysquasher has a Wet/Dry control that lets you blend the original uncompressed signal with the compressed signal to taste. This is sometimes referred to as New York or Parallel compression. It’s a very useful technique because it allows you to subtly thicken or crush a signal, but maintain your dynamic range. I’ll often perform this with sends and returns, but setting a balance with a single knob is far simpler. 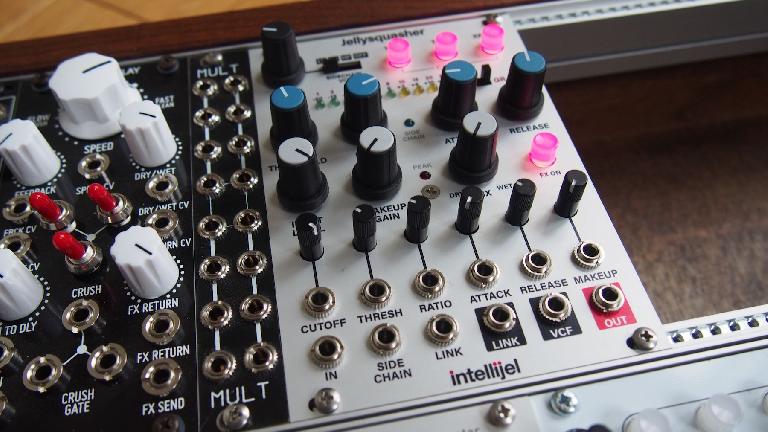 Jellysquasher also features sidechain compression, meaning a secondary signal can be used to engage the compressor on a separate source. The most common application of this is to use a kick drum to trigger the compression of chords, bass lines, hi hats, pads, or everything else in the song to make it bounce, breathe and swell between each hit of the kick. This particular Sidechain circuit makes use of a multimode filter, something I’ve previously seen only in software. The advantage here is that you can isolate a particular frequency range to trigger the compressor.

For example, if you have a full drum groove plugged into the Sidechain input, you can easily isolate the thump of the kick drum with the Lowpass Filter to get that pumping effect described earlier. The Bandpass filter is great for finding a specific note or tone to engage the compressor. Or you can use the Highpass filter to rhythmically duck a pad with your hi-hats. In the absence of a Sidechain input signal, the main input is passed through the Sidechain Filter path. There is a separate output for this filter path, and the cutoff can be controlled with a knob, or modulated through CV to function as a basic VCF. Filter resonance is adjustable using a trimmer on the back of the module. I found the filter output really useful for finding the material that I wanted to use as my sidechain signal. I would listen to the output of the filter as I swept through my material, and then switch back to the main output once I found the sweet spot.

A drone from Rings receiving sidechain compression. In this case I actually used a short envelope signal, but it did the trick. You can hear me playing with the Attack and Release settings as well. 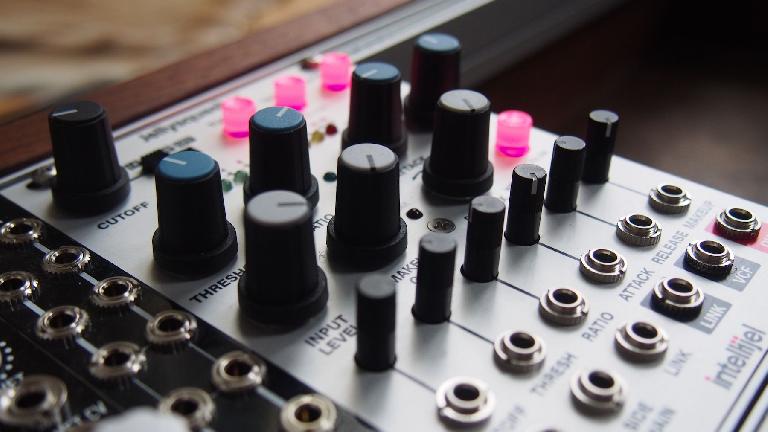 Jellysquasher offers three types of coloration that can be applied individually or combined together. Tube is an emulation of tube amp grit and adds non-linear distortion and introduces second order harmonics. I found this mode introduced a swishy high frequency noise that was useful for making things dirty and crunchy. Tape mimics tape saturation and adds symmetrical distortion introducing both odd and even harmonics. XForm modifies the transformer feedback circuit to boost low frequency content. The Jellysquasher uses an Edcor transformer known for its pleasant saturation qualities. Punching in XForm can really beef things up and give them weight. Jellysquasher’s Color settings really shine when you hit the input hard. Cranking the Input Level with the Color settings engaged can mash things up with grungy distortion if that’s what you’re after. Because the input can handle up to +17dBv you have plenty of headroom to really slam things. 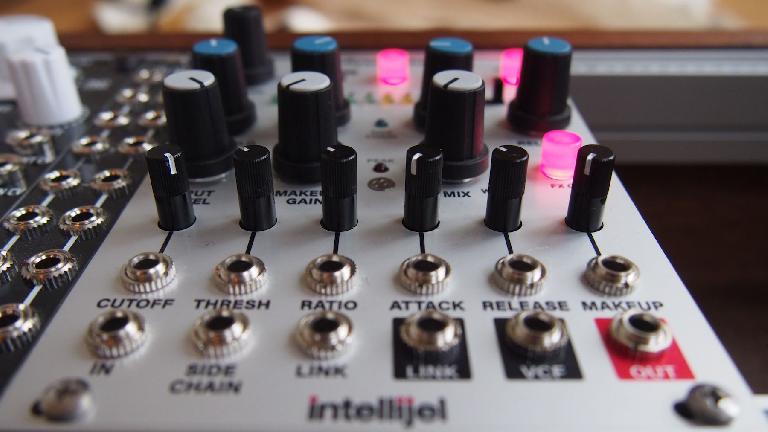 How Does It Sound?

Jellysquasher can be nasty or nice depending on how you dial in your settings. In any format it would be a solid compressor, but of course it’s a eurorack module and made to work within that realm. True to Intellijel’s usual form, plenty of CV inputs with attenuators are provided for integration with the rest of your system, including the option to link additional Jellysquashers. Personally, I would love to see a Jellysquasher expander to get a second channel without having to add an entire second squasher. Modulating Ratio and Threshold can yield some interesting results as they can drastically change the way it responds to the signal. Sending control to the Attack and Release inputs meanwhile might add some off-kilter wobble to the rhythm of your pumping.

A slow reverby arp, dry then Compressed with Ratio modulation. 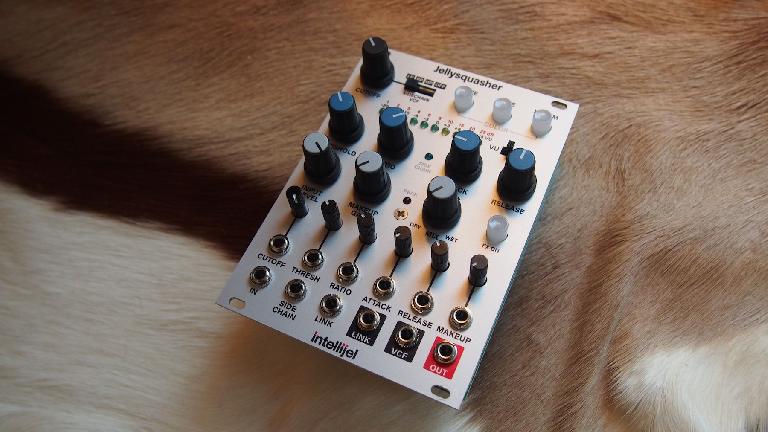 The module provides enough visual feedback to assist in effectively adjusting settings. The strip of LEDs can switch between functioning as an input VU meter or a Gain Reduction display. A red peak LED lights up if the signal is overloaded, but in the case of this module that’s not always a bad thing. In fact I would advise you to drive it and overload it, especially with all three Color settings engaged. There’s also a Sidechain LED to show the presence of signal. 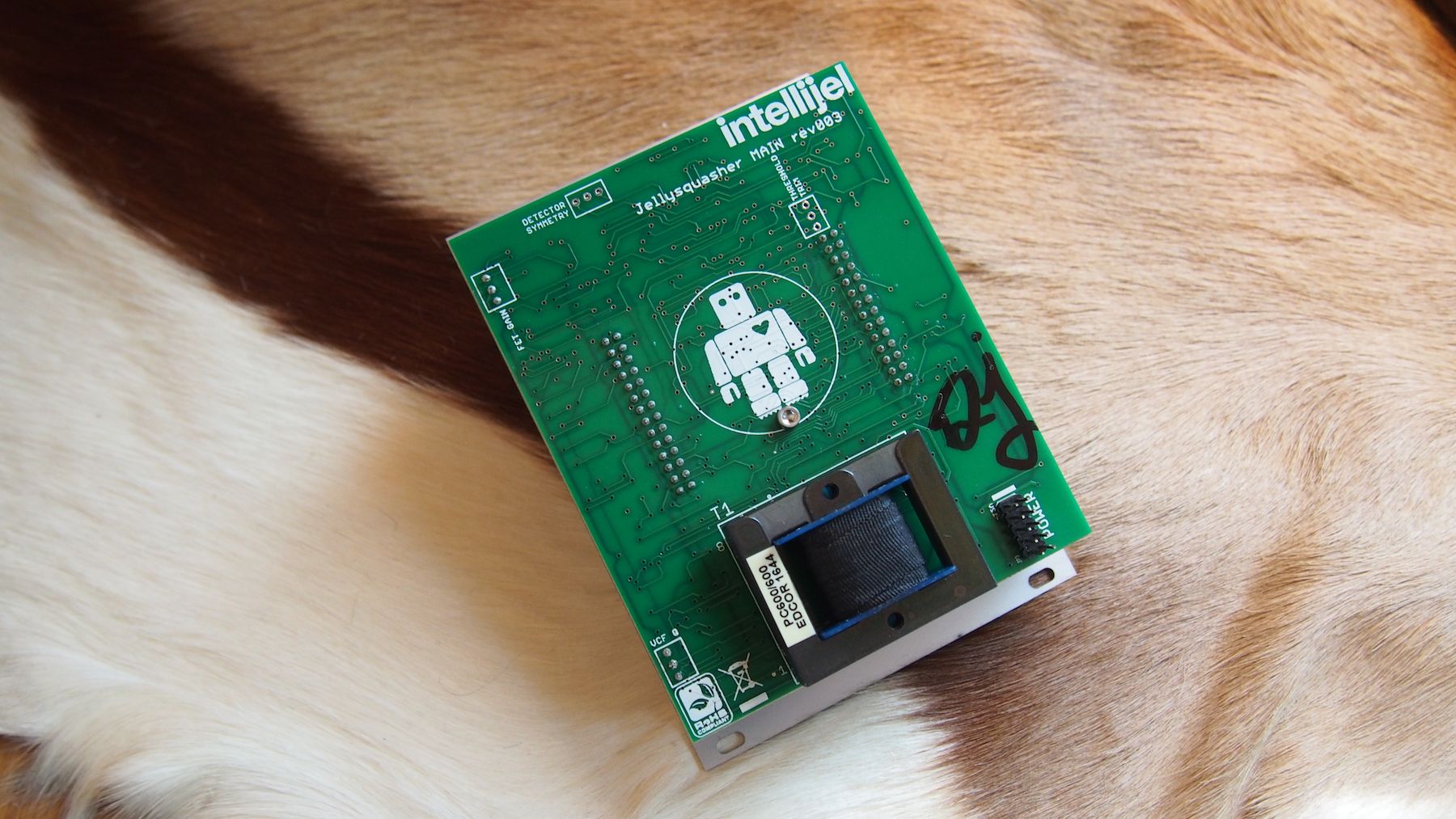 It’s clear that a lot of thought went into the design and layout of Jellysquasher. The controls and inputs are all useful, intuitive, and musical. The Attack ranges from a snappy 200µs to 200 ms, and the Release covers 50ms to 5s ensuring a broad range of applications. Because there are no value ranges displayed on the panel, it will take some playing to work out the response curves. While it would be nice to be able to set things more precisely, I found that I dialed parameters in more intuitively and learned to trust my ears. It works great as a polite utility compressor to tame wild dynamics or thicken a signal, but it really shows its true colors when you get wild with it. 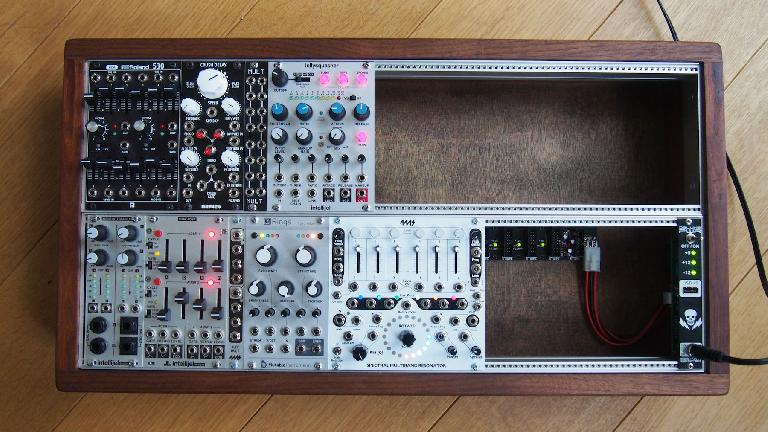 Cons: Mono only and stereo requires a second module. No values for knob settings displayed on panel.

Scott Riesterer
Scott is a Sound Designer from Vancouver, Canada who has contributed his post production audio skills to dramatic and documentary films, animations, video games, and oddly enough, the Chevrolet Volt. His music makes heavy use of field recordings gathered from a variety of sources and locations. In 2013 he released Sonidos De Cuba, an ambitious album built upon field recordings from a trip to Cuba and it was nominated for Best Electronic Album in the Western Canadian Music Awards. He is currently working on music featuring recordings from Belize, Japan and Thailand between his dialog editing projects.
Related Videos
Comments (2)