All Articles Recording & Production
Synthesis Survival Guide: Filters
Peter Schwartz on Wed, December 4th 0 comments
Language
In his last mission on uncovering the mysteries of synthesis, Peter Schwartz explored Frequency. Get ready for the big reveal on everything related to filters.

Various factors determine the character of any given synthesizer sound, though it all starts with our choice of oscillator waveforms. Then, quite typically, that sound is tonally altered by selectively removing or emphasizing certain portions of the frequency spectrum with a filter.

As mentioned in my previous article on frequency, most every synth on the planet features a lowpass filter (LPF) which cuts frequencies higher than the setting of the filter's cutoff frequency control. When used on bright waveforms such as sawtooth waves, turning down the cutoff reduces the brightness factor. Or, we can do the opposite, starting with cutoff set to a low frequency to create a dull, dark sound which reveals its natural brightness as cutoff is turned up.

Of course, adjustments to cutoff can be performed manually from the control on the face of the synth. But when we use an envelope, LFO, or MIDI control to perform these changes, we are 'sweeping' the filter. And any time you sweep the filter, the tone (timbre) of the sound changes dynamically over time.

Many synth designs offer other types of filters which enable us to alter the sound in more novel ways than what LPFs offer. For example, Predator features 27 different filter types (see Figure 1) and Omnisphere (see Figure 2) offers a whopping 84 filters choices! 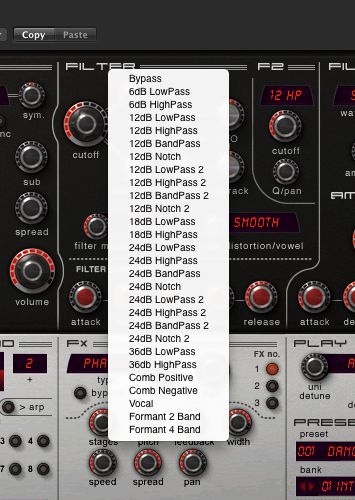 Figure 1: Menu of Predator's 27 filter types, including specialty filters shown at the bottom of the list. The Comb filters are particular favorites of mine. 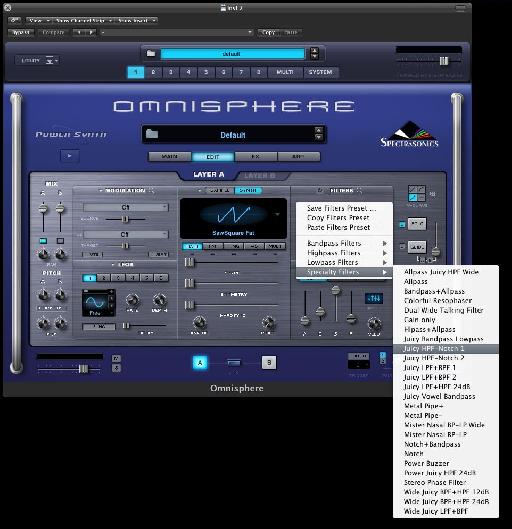 Despite the wealth of filter choices found in these plug-ins (including some pretty exotic ones), the most commonly encountered and traditional synthesizer filter types number only four and are as good a place as any to start learning about filters:

'¢ Notch (passes lows and highs, cuts out frequencies somewhere in the middle)

Choosing the right filter for a particular sound starts with an understanding of what lows, mids, and highs are all about, and how different filters affect them. And one of the best ways to illuminate your ears to different filter responses is to use a sound source that contains all frequencies simultaneously: white noise. With white noise, we have an equal distribution of randomly occurring frequencies across the audio spectrum of lows, mids, and highs. Running noise through a filter and then moving the filter's cutoff frequency up and down makes it easy to hear the action of any filter, as we're about to see and hear.

For illustrative purposes, I'm using Logic's stock channel EQ with built-in frequency analyzer not only to simulate various synth filter responses (hey, EQs are filters too!) but also to display the changes they make in the sonic spectrum. As shown in Figure 3 below, white noise fed into the plug-in reveals frequency content throughout the broad ranges of lows, midrange, and highs. 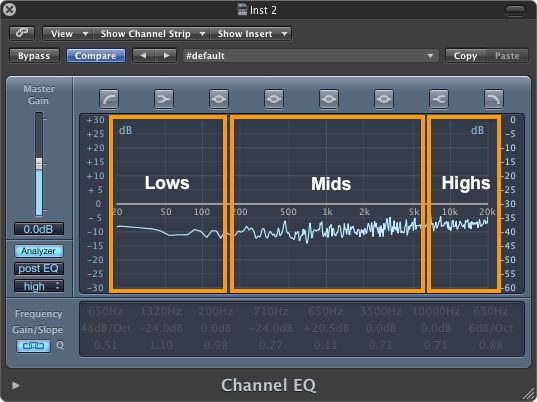 Figure 3: Frequency spectrum of unfiltered white noise, showing even distribution of random frequencies across the range of hearing (20 Hz to 20 kHz).

As previously mentioned, if we lower the cutoff frequency of an LPF, we cut highs and pass lows. Figure 4 shows a LPF response I've set up on the EQ, cutoff at 650 Hz. A comparison with the unfiltered noise shown in Figure 3 shows how the energy of the highs (and some mids too) have been significantly reduced. The sound becomes duller, but retains its rumbly character because the lower frequencies below the cutoff point are passed through. In the following audio clip, I alternated between the unfiltered noise from Figure 3, and the filtered noise shown in Figure 4. 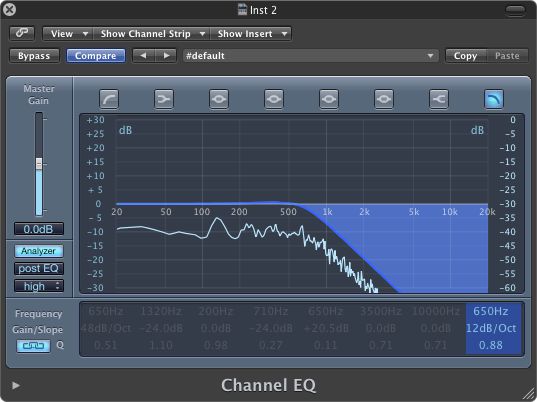 This filter has the opposite effect of a lowpass filter, passing high frequencies while cutting off frequencies below the cutoff frequency (typically, the lows). In Figure 5, we see an example of how an HPF, cutoff frequency set to 1.44 kHz, has removed the harmonic content from the lows and midrange. 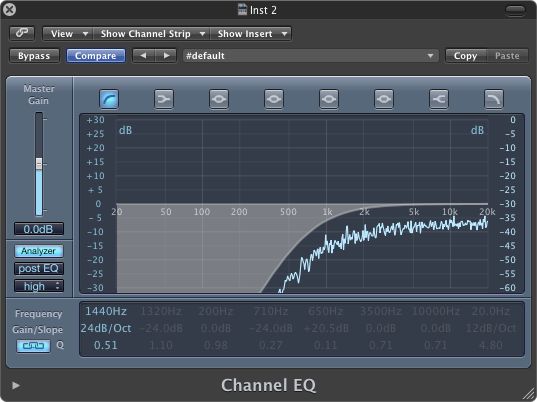 Figure 5: Frequency analyzer showing lows and mids reduced by the action of a highpass. Note the characteristic shape of the highpass filter curve '" sloping up from the left to a flatline in the high frequency range.

White noise alternating between unfiltered and filtered (at 810 Hz), followed by a highpass filter sweep from 20 Hz up to 20 kHz.

Note how the sound of the sweep starts out full-sounding but then gradually disappears into nothingness. 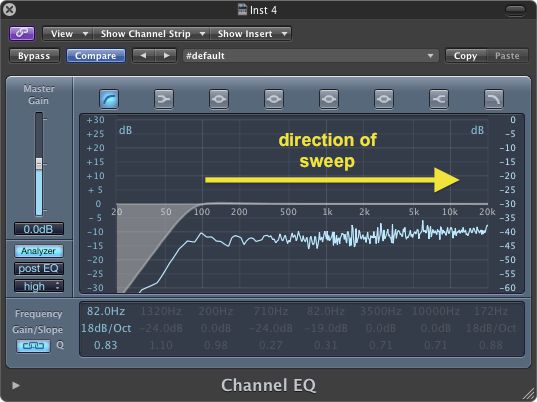 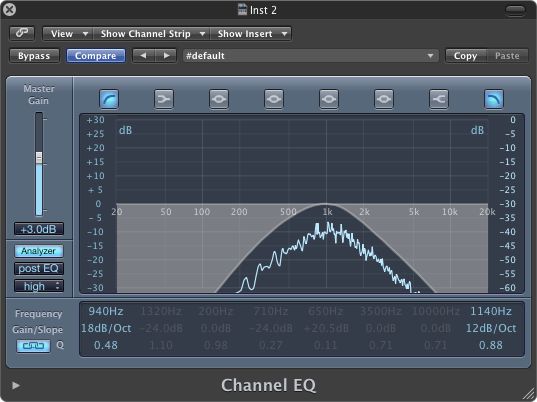 Figure 7: Frequency analyzer showing the response curve of a bandpass filter, where the lows and highs are cut on either side of a hill-shaped 'pass band' of frequencies. 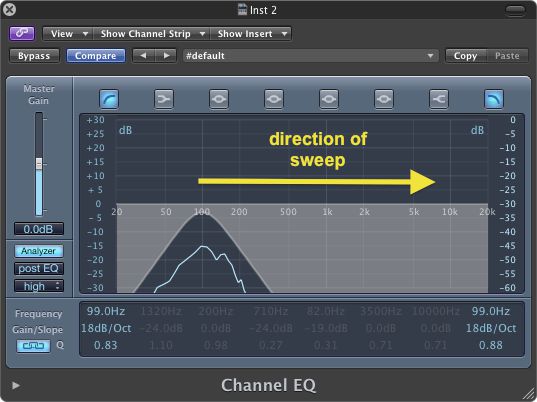 At first listen, the sound of this sweep may not seem all that different from that of a HPF sweep, but they do indeed have different characteristics. The HPF sweep started off bright and maintained its bright character even as the sound thinned out (cutoff moved from low to high). By comparison, the BPF started off sounding dark and got brighter, thinner, losing its dark as the cutoff was swept from low to high. You can hear the difference in this next audio example where the BFP is followed by the HPF sweep:

This filter is not used as often as the other three we've covered, perhaps because the change in timbre it creates is usually either too weird or too subtle to make much of a statement. Still, it's one of my favorite filters, especially when sweeping noise. But before we get to that'¦ As the filter response curve shown in Figure 9 shows, a notch filter passes all frequencies except those which occur around the center frequency of the notch itself. 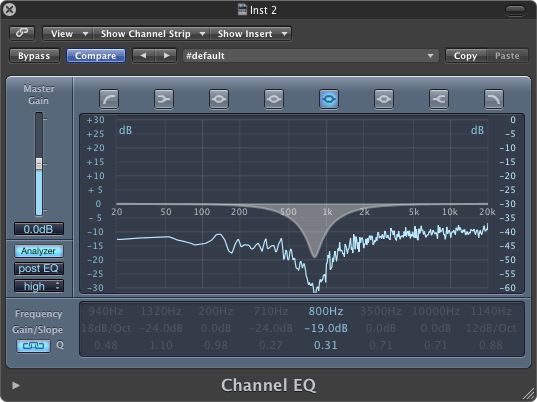 Figure 9: The frequency response curve of noise running through a notch filter with cutoff frequency at 800 Hz.

In this audio example, I'm sweeping the notch from low to high, from about 400 Hz through about 12 kHz. The whooshing sound it creates is way cool, sounding very much like a phase shifter. 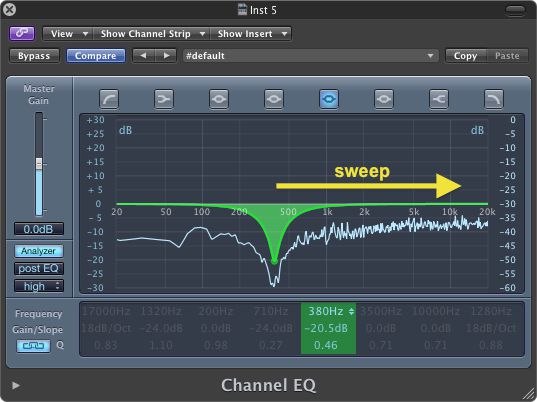