All Articles Review
Video Review: Elektron Model:Cycles
Rishabh Rajan on Thu, May 7th 0 comments
Imagine a powerful 6-track groovebox with 6 FM synthesis engines and an Elektron sequencer with per-step automation and you've got the Model:Cycles. Watch this to find out if it's good for you.

Back in the end of February, Elektron announced Model:Cycles, their 6-track FM based groovebox. Like the Model:Samples, the Cycles machine is a powerful sequencer, but unlike its sibling, it doesn't rely on samples but uses FM synthesis to create its sounds.

In this video review, synth expert, Rishabh Rajan puts this affordable Elektron machine through its paces:

The Model:cycles has 6 separate tracks and there are 6 FM engines. You can have one engine running across all tracks, or a combination of the engines across the tracks as you wish.

Every track is monophonic but there is a chord mode which lets you play a preset chord on a track... however, this doesn't make it polyphonic.

The sequencer is a major draw for all Elektron machines, and while it can be very in-depth, once users get into it there's no turning back. And the Model:Cycles sequencer is no exception while being simplified compared to the higher end Elektron machines. There's generally a one knob, one function metaphor which keeps things simple, though some of the buttons and knobs are able to provide multiple functions which allows for extra flexibilty too.

The Model:Cyles can store up to 96 projects and in each you get 6 banks with 16 patterns each. Each pattern can have up to 64 steps. With some sneaky manouevres it's possible to create polymetric patterns. There's step sequence pattern input and real-time input which can be recorded quantized or unquantized and each step can be nudged independently.

Model:Cycles includes per step automation which makes this machine almost infinitely powerful, flexible and enjoyable to use and play.

Watch the video above to go deeper into the different functions and controls of the Model:Cycles. 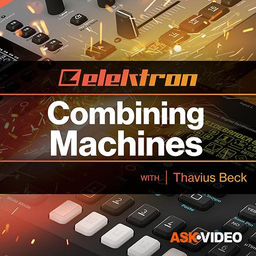 Dream It. Do It.
Do you want to learn Combining Machines?
Yes, I want to learn!
No Thanks, I just want to read the article.
Feedback
How are we doing?
We'd love your thoughts, feedback and questions regarding our new site. All feedback is appreciated!
We do not respond to this form! If you need support, please visit our support page.
Thank you for your input!
Your message has been successfully sent
Course Advisor
Don't Know Where To Start?
Ask A Course Advisor