All Articles Reason
Creating Quick Bread and Butter Sounds in Reason
G.W. Childs IV on Tue, May 28th 0 comments
Language
Designing sounds is like using building blocks. By creating 3 simple patches G. W. Childs shows how, in no time at all, you can use Reason to take you into different sonic dimensions.

Sound design is a fickle mistress. What sounds good to one person, sounds like the sad bleep of a robot on steroids to someone else. You can't ever make everyone happy. Reason, with its giant arsenal of synthesizers and samplers, however does get very close. And, it's been doing it for several years now.

If you're new to sound design, learning with Reason is a great way to start. The interfaces of each device all match the original hardware pieces they are based on very closely. And, because of this, it's extremely easy to make new patches. But in learning each device, you gain an added benefit of being able to use hardware, should you ever come across it. Granted, there will be some minor differences. And, you will need to actually plug in each device to amps. Reason won't be there to do it for you automatically!

There are a couple of ways to learn sound design in Reason. One way would be to go through each preset and try to see what parameters cause specific sounds and tonalities and behaviors to occur. While this can be fun, it can also be exhausting.

We at macProVideo.com have another way of easily learning sound design. Our way is by giving you some quick and easy sounds to make yourself as starting points. Therefore, I've chosen a few different patches for you to make on your own. But, the cool part is... These patches can all be created within a few steps.

To get started with this exercise, I would suggest opening a new Reason session. As we move along, we'll be creating a few sounds that, in the end, you'll be able to use as a nice, basic ensemble that can be easily augmented with effects.

Let's start off with an extremely easy sound that almost sounds real!

Create a Thor. The base device that we'll be using for our Male Choir will be Thor. Because it's got a Formant Filter that is hauntingly accurate at modeling a human throat, this patch is an ideal first choice. This is simply because it's only a couple of steps, but has some very quick instant gratification.

By the way, if your Thor device does not read INIT Patch, like what's shown in the figure above, make sure you right-click on Thor and select Reset Device. This should be done for all patches in this tutorial! 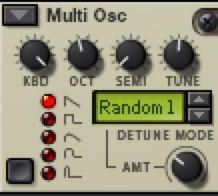 Change the first Analog Oscillator to a Multi Oscillator. These oscillators can get very thick, very easily by adjusting the detune amount, which is the small knob labeled AMT, in the lower, left-hand corner of the Multi Oscillator. Move your amount knob to where mine is. This will give us a hair of detuning. But, not too much!

Replace the Low Pass Ladder Filter with a Formant Filter. By adding in this filter, we give our Choir its '˜throat', pretty much literally. At this point, no additional setting is needed. 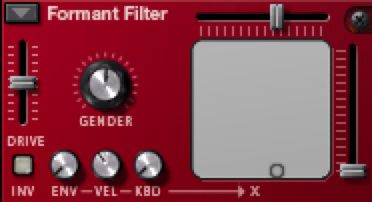 This patch sounds best in around the C2 octave. And, if you add in some reverb, and modulate the pitch a little to your specifications, you can get a surprisingly realistic patch. Try building on it!

Create an NN-19. This is an older sampler. If you're new to Reason, that was '˜succeeded' by the NN-XT in a later version. While the NN-19 is simple, there were some really cool elements that were created for its sound bank. Most of these elements were actual samples from classic synths. Let's use this to our advantage.

Load the Raw_Odyss_RMod.smp patch for the NN-19. This is a sampled patch from the classic Arp Odyssey, and has a really nice tone right off the bat. Also, since this is a raw element, it's extremely easy to build new patches from this basic sampler patch. 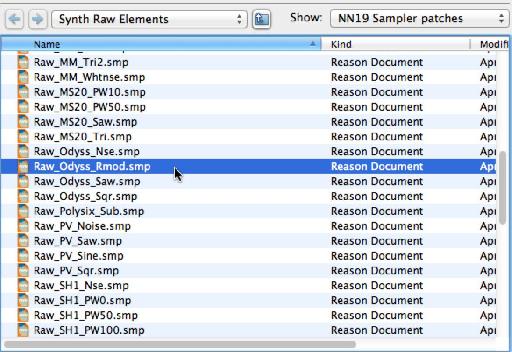 Adjust the filter of the NN-19 so that we get a bigger, much deeper bass. Lower the Filter Freq down to 26, so that we filter out some of the unnecessary higher frequencies. And boost the Filter Resonance to 56, so that we're boosting the now lower Filter setting at the cutoff point, resulting in a very nice push. Also, raise the Filter Envelope amount to 76 and the Envelope Decay to 80. With these settings we now have a nice, sculpted synth bass that can easily sit in most mixes.

You may also consider pairing this patch with a Pulveriser, and maybe even a Chorus. Both added devices will give you more punch and more thickness.

Create a Subtractor. This is another legacy Reason synth. But, because of its Nord-ish history, it's still very, very capable and modern sounding. Make sure the synth is reset!

Make sure that both Oscillators are enabled and that their Phase Modes are set to '˜-'. Also, while you're in the oscillator section, set the Osc 2 Octave to 5, instead of 4. By having one oscillator a step up, we'll get a seemingly thicker sound.

Now for the big thickener. In the LFO 2 section, raise the Amount to 59. Because LFO 2 is set to modulate Phase by default, you'll hear an immediate result. With the phase being modulated, you'll hear that fat phasing sound going on in your patch.

Finally, lower the Polyphony to 1, so that the patch is now Monophonic (only one note at a time can be played). This will give us that old, analog feel while we're playing the patch. And, let's raise the Portamento up to 56. Now, our notes are bending with each new key played. Instant lead! 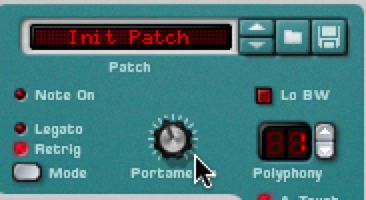 For this patch, consider mixing with some Chorus, and some Delay. This will pump the lead up a little bit more, and give a nice etheric tail on the end.

There you have it! Three really simple patches that take no time at all, but give some decent size results. Try building off of these and see what you come up with! Dream It. Do It.
Do you want to learn Advanced MIDI Workshop?
Yes, I want to learn!
No Thanks, I just want to read the article.
Feedback
How are we doing?
We'd love your thoughts, feedback and questions regarding our new site. All feedback is appreciated!
We do not respond to this form! If you need support, please visit our support page.
Thank you for your input!
Your message has been successfully sent
Course Advisor
Don't Know Where To Start?
Ask A Course Advisor