All Articles Review
Review: FXpansion Bloom
Hollin Jones on Thu, June 13th 0 comments
Language
Calling FXPansion's Bloom a delay plug-in is like referring to an iPhone as a... phone! Sure, at its heart it does delays, but Bloom can do so much more thanks to its extra effects processors.

FXpansion is a well-established developer of such formidable virtual instruments as Geist and Tremor, and more recently of the DCAM synths and the Maul multi-distortion effect. I've been reviewing their stuff for a number of years now so it was with some excitement that I received my copy of Bloom, the latest effect plug-in. Running on Windows 7 and OS X 10.6.2 and above, it's a modest download and needs an Intel Core 2 Duo at 2.5GHz or i5 CPU at 2.9GHz plus 2GB RAM. It comes in VST, AU and RTAS formats and is authorised using FXpansion's own challenge and response system that allows up to three authorisations on your own computers. It sells for $99 / Euro 79 / Â£69. Until the end of March, it's discounted for owners of some existing FXpansion products : check the website for more.

Bloom is at its heart a delay plug-in, but as we will see that's a fairly simplistic description of what it does. Your DAW probably comes with some decent delays, but stock plug-ins tend to be relatively basic in their operation. For some kinds of music, especially today's more experimental electronica, a simple 4/4 delay isn't particularly new or interesting, and FXpansion has created something to cater for those who want to get more creative with their delays.

The first thing you notice about Bloom is that it's physically quite large due to the many controls it has, but it's still perfectly manageable. You're likely to start, as I did, by loading up a loop and cycling through the presets to see what kind of things it can do. These are grouped by type, so it's easy to find what you want. Among the folders of instrument-specific presets are some more general ones and you can of course apply any preset to any track. As you might expect the presets are excellent and cover a wide range of bases so they are easy to dial in if you're in a hurry and get some great results. 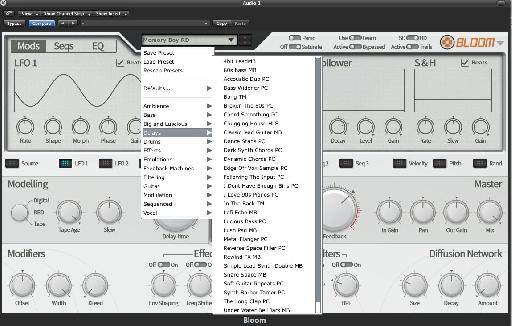 A 90s piano delay preset on a drum loop? Why yes, I think I will.

Dropping a delay into a track is pretty standard stuff, but Bloom is actually one of the most in-depth delay designers around. At its heart are three types of delay emulations : digital, analogue BBD and tape. Each one also has a user-definable amount of degradation so you can for example set the number of bits or the 'age' of the tape being used, as well as a Slew control that can smooth the change between delay times. Much of the time you will want your delays to sync with your DAW's project tempo of course, and a control panel in the center of the window lets you set some basic parameters for the behavior of the chosen delay. A menu of syncable delay times is available, as well as the ability to type in a millisecond delay value. You can also reverse and freeze the delay effect for more advanced results.

Bloom also has three separate step sequencers built in, each with 16 steps that can be anywhere between 64 bars and 1/64th notes, with straight, triplet and dotted timing available. These are used to help you modulate parameters within the effect and each one can work in regular mode or delay, freeze or reverse modes. The idea is that you draw data in here to control other parameters in real time using the TransMod system, of which more in a moment. Jumping briefly to one of Bloom's other main sections, you get two separate LFOs, an Env Follower and a Sample and Hold section, each of which are fully configurable. Again these are used for modulating other parameters and making the overall effect more dynamic and interesting. 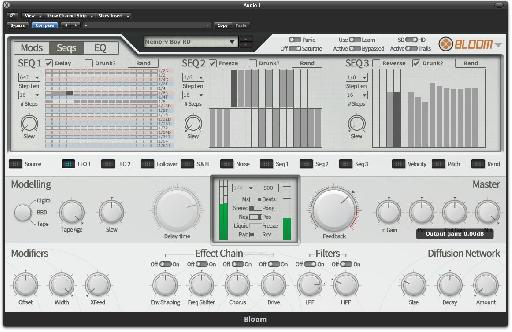 Three sequencers can be used to control the behavior of delays and other parameters within the effect.

For those who haven't come across it before, FXpansion's TransMod system is a clever way of assigning modulation within a plug-in or instrument without using a conventional mod matrix. Essentially how it works is this. The central band running across Bloom contains a number of source buttons. When you select 'Source' itself, TransMod assignment is deactivated. Click on any of the other buttons in this row however and you are able to quickly assign that source to any parameter that has a rotary control, by moving the mouse towards the outer edge of a dial and 'painting' a change in. So in practical terms you might for example select LFO 1 or Sequencer 1 and then assign it to modulate delay feedback amount, panning or drive level. And you can assign other sources to exactly the same parameter to make things even more interesting. Tweak the mod sources to control the way they change other parameters and hence the audio output. TransMod is a really clever and intuitive way to create effects far more involving and fututistic than you can in most plug-ins, and by right-clicking on a dial you can modify or edit the modulation assigned to it. 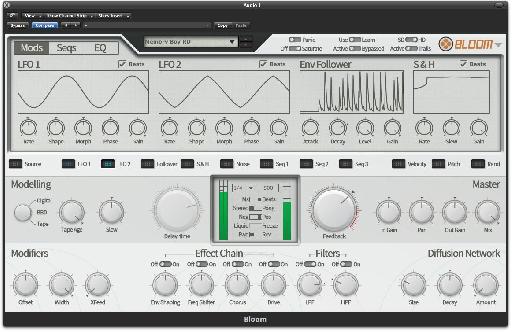 Use the many mod sources to spice up the behavior of other sections, adding movement and interest.

But wait, there's more! Bloom also has its own internal effects chain comprising frequency-shifter, chorus, envelope-shaper, overdrive, saturation and LPF/HPF filters that can be flexibly placed in one of three different positions in the signal path, altering the end results. Each effect can be switched on or off and also modulated using the TransMod system, by any available parameter. So if you link up modulating the delay and the drive and filtering for example, you're pretty quickly into some crazy effects. Last but certainly not least in the effects chain, there's a Diffusion Network stage which is essentially a rich reverb effect and has size, decay and amount controls. It's designed to work specifically with the delay effects in Bloom and enhance the size and space of its effects, and it works really well. The third main section is EQ, and you get to set three band EQ for both the FX and output sections as well as managing routing within the plug-in itself. There's also MIDI learn as you would expect and standard and hi-def modes for trading off performance against higher quality. An EQ section, in case you weren't already effected-out.

Bloom is an excellent delay plug-in and even a quality multi-effect in its own right. On one level you can use it simply to stick on tracks and load presets, adding cool sounding effects and space to your productions. On another it is a highly configurable delay designer with the excellent TransMod system providing intuitive control over the behavior of the delay parameters and all other knobs and dials. This is relatively easy to pick up even if you haven't used it before, and makes Bloom appealing both to beginners and more advanced producers. Adding internal sequencers provides an unparalleled level of control. There's even a downloadable demo available so don't delay (aaargh sorry), try it today!