All Articles Review
Review: Rob Papen SubBoomBass
Hollin Jones on Thu, September 5th 0 comments
Language
Looking for an instrument to give you that satisfying low-end your tracks are begging for? Hollin Jones checks out SubBoomBass and gets more than he bargained for.

Rob Papen has been making waves in the virtual instrument world for a number of years, as an independent developer who has produced some great sounding electronic instruments with a particular emphasis on dance, hip hop and other similar genres. While some of his plug-ins are more catch-all synths, SubBoomBass is targeted at the bottom end of the frequency spectrum, though as we will see it's rather more capable than that description would suggest.

At $119 the synth is affordable, and comes in all major formats for Mac and PC. It's supported as far back as Windows XP and OS X 10.4, so even if your machine is long in the tooth you should still be able to run it.

At its heart are two oscillators with selectable waveforms '" analogue and tuned percussion '" and each can run free or one can be synced to the other. You can tune either one up or down by an astonishing 48 semitones, meaning it's possible to go both really low and very high and by combining the two, create some really interesting sounds. There's a filter section with selectable modes and extensive controls so you can shape and morph your sound, and a second smaller filter section and an amp section where you get to control the gain and bite. The sound shaping section can be flipped into Easy mode, where there are fewer controls but the main ones remain at your fingertips. 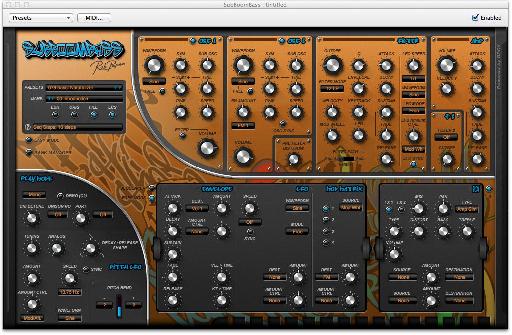 The synth can be used in Easy or Advanced modes, though even advanced isn't particularly tricky to learn.

Presets can be easily selected and there are over 1000 to choose from, ranging from acid basses through thundering subs to percussive sequences. That's right '" you can actually build simple electronic beats with this thing too, thanks to the built-in sequencer. This has 16 steps and is highly tweakable, letting you add ties, tune steps and control swing and slide to create short bass / beat patterns. 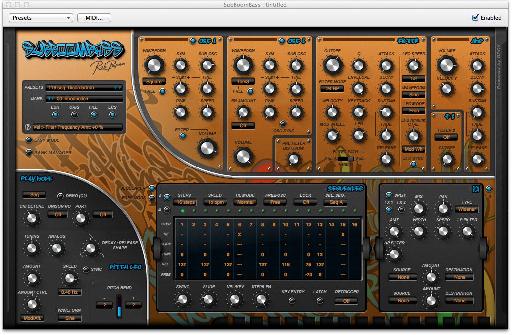 The onboard sequencer and flexibility of the synth engine means you can go beyond simply playing monophonic bass lines.

Since it is synth and not sample-based, you have great freedom when it comes to modifying the way the sound is generated. To this end there's also a free modulation section where you can assign certain parameters to modify other elements of the synth. Preset bank management is possible too, via a dedicated and easy to use section. 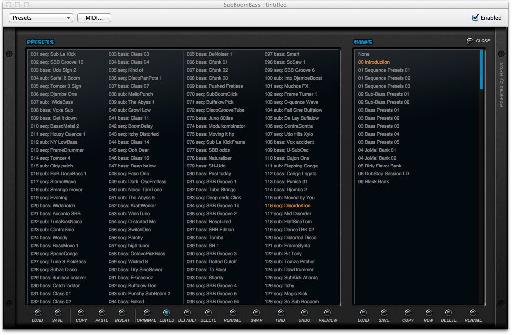 Manage your patch library with the built-in Bank Manager.

So SubBoomBass is capable of making some earthshaking sounds as well as some more dynamic and percussive sounds you might not have expected, and there are also over 20 types of effect over two slots available to process and fatten up the results. Patches can also use different play modes so although mono or legato might be the default for many bass sounds, there's also sequenced mode and up to six-part polyphony. As the synth is capable of more than just straight-down-the-line bass noises, this opens up much greater creative possibilities.

SubBoomBass is a great synth for electronic basses and also sound effects, sequences and making weird noises. It's more flexible than its name suggests, though it's certainly capable of shaking the windows too. There's a time-limited demo available so for anyone working with electronic music it's well worth a look.

SubBoomBass RE is also available as a Rack Extension for Reason users from the Propellerhead Shop for â‚¬65.