All Articles Keynote
Staying Organized while Producing your Album
G.W. Childs IV on Fri, February 4th 0 comments
Language
Creating, or producing an album is a daunting task. It can be tricky enough to write and produce one song, but ten, or thirteen songs? That can be a lot to handle! This is especially true if you are w

Creating, or producing an album is a daunting task. It can be tricky enough to write and produce one song, but ten, or thirteen songs? That can be a lot to handle! This is especially true if you are working on your first album, which can seem far more like a mountain than a mole hill.

In my earlier works, I tended to rely on memory, more than any kind of written organization to keep my project going. However, when I would finally put everything on a CD, I'd be surprised to notice (along with my angry band mates) that small details were left out.

This is when I started to develop a very simple spreadsheet for myself, a form of organization I'd learned in video game sound design. With a very simple four column system, I could, at a glance, tell where the songs were in their various stages of production. This was far more effective than opening up the project file in Cubase, or Logic to tell by listening, etc.

In this tutorial, I'd like to show you how I set up my spreadsheets using Numbers to help me keep track of where I am in any particular album. 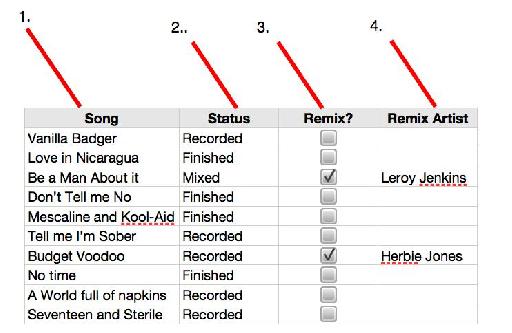 I always start off by labeling my first column as simply 'Song'. However, it can be 'Track', etc.

The next part is really important, because it let's you easily glance where you are on any particular track. This is the 'Status' column. I have three main descriptions I use. 'Recorded', 'Mixing', and 'Finished'. Feel free to come up with several more. Some other descriptions I've used in the past have been, 'Needs lyrics', 'Needs Guitar', etc.

My third column is not necessary for all types of projects, but very relevant for most pop albums. The remix column is simply a check box letting me select which track will be a remixed single from this album. If a song is checked, this will lead to the fourth column.

The fourth column is where I assign which remix artist, or artists will remix this track. Remixes are a great way to get your tracks out to other crowds that may not normally be exposed to your music.

And this is really it. Granted, you can add more columns as you wish, but I try to keep it very simple. You are also welcome to color code your various tracks as well, and get rid of the status column if you like. Though, if you do this, make sure you make a legend at the bottom stating clearly, what color means what. For example:

As you start to work with this method more, I would also suggest placing the actual spreadsheet file in with your album file. The idea behind this is that, if your computer goes down, your organization, along with your album are all on your secondary drive!

...You do have your project on a secondary drive, right?