All Articles Review
5 Useful Spring Reverb Plugins
Rich Tozzoli on Mon, May 8th 0 comments
Sometimes a special kind of reverb is called for to get just the character you want. Rich Tozzoli springs into action with a guide to five of the best, well, springs!

Recently, I was lucky enough to spend a few weeks recording down in the Caribbean. Working off a nicely equipped portable system in a cliffside house, we got a lot of tracking done for a variety of projects, including a lot of sun drenched TV cues for the Food Network. But since the amps we had didn’t work for all our needs, we went in the box. Using multiple amp simulator plug-ins, the thing that was really missing was the depth of a good reverb. With that in mind, here are 5 useful plug-in spring reverbs each with their own flavor. 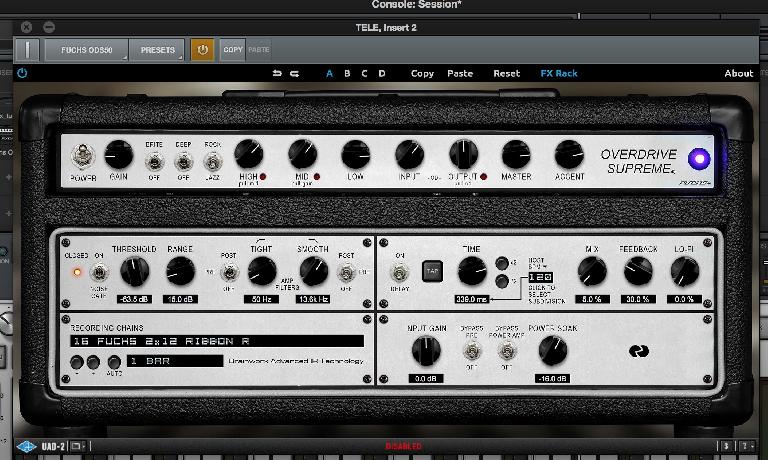 Here’s an example of a clean telecaster, playing a reggae chop. The amp is Universal Audio's Fuchs Overdrive Supreme 50, which is a Dumble inspired boutique amp for UAD Apollo rigs. To get the clean sparkling tone, I’ve turned the Gain way down, left it in Jazz mode, and pushed the Accent up for sharpness. It’s a nice thick sound that still retain proper top end for the kind of sound the track required. Now, the only thing it needed was some good reverb. 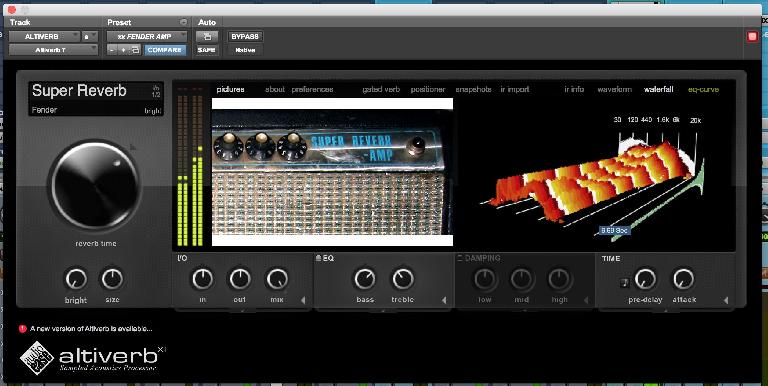 Ok, this one was my first go-to, since I’ve used it for quite some time now. It’s an impulse response of a Fender Super Reverb amp from Joe Gore. Originally released in 1963, Super Reverbs were all tube designed amps with a spring reverb in it. From 1968 on, they were ‘silverface’ models, which this Altiverb IR is from. It's extremely bright and clean, almost to the point of being too bright. What I usually do is simply turn down the treble and kick up the bass in the EQ section. The Altiverb plug-in is on a stereo AUX bus, so it’s mono guitar, stereo reverb. I will often put an EQ after the Altiverb plug-in for more tonal control over the bright/dark mix, but in this case, I used the simple treble and bass offerings in the reverb itself. It’s a classic amp for a reason! 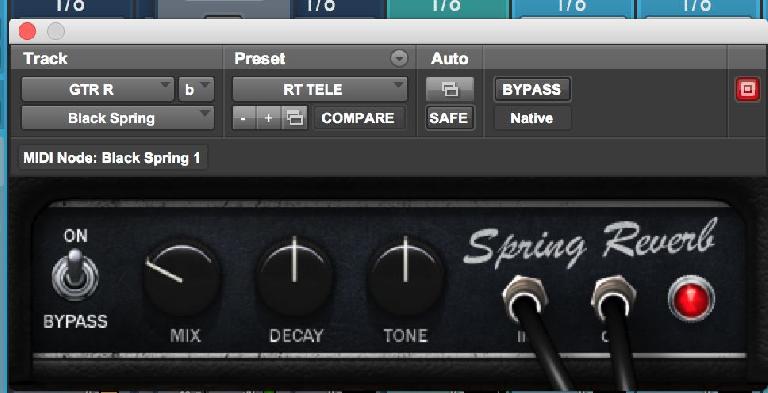 One of my surprise finds of the trip was the Avid Black Spring. I didn’t even know about the plug-in before stumbling across it in the Reverb folder of our Pro Tools 12 rig. It’s based on the Fender Spring reverb from the ‘blackface’ era. Since this is a mono ‘stomp box’ plug-in, I inserted it directly onto the guitar track, instead of running it as an Aux Bus Send/Return. It doesn’t get any easier to use too. It’s got Mix, Decay and Tone knobs. Since it is directly on the track, the Mix works as a wet/dry control, allowing you to put as much or as little in as you like. Decay will give you more length, and Tone of course controls the overall brightness and darkness. It’s a nice creamy thick spring sound that I’m really glad I came across.

One thing you can do if you want full stereo is to create 2 separate mono busses, pan them to opposite sides, put the Mix to fully wet and tweak each one differently. I wish this wasn’t an HD plug-in only, it's that good that they should let everybody in on this one.

Still inside of Pro Tools, we tried out the AAX Native Revibe II, which is actually a room modeling plug-in. However, we stumbled across some Guitar Amp Spring presets, which are quite good. It's highly flexible, because there are many parameters to tweak. Under Room Coloration, you can quickly adjust Coloration, High Freq and Low Freq to brighten or darken the spring. Also, you can go up to Size and make the spring shorter or longer in duration. By pushing up the Pre Delay in the main reverb section, you can even get some short ‘slaps’ if you want to go there, or add some extra depth. Overall thought, it’s a highly adjustable, good-sounding spring that works nicely on guitars and since there is a a Dry Wet slider in the Mix section, you could choose to add it directly on the track if you want. 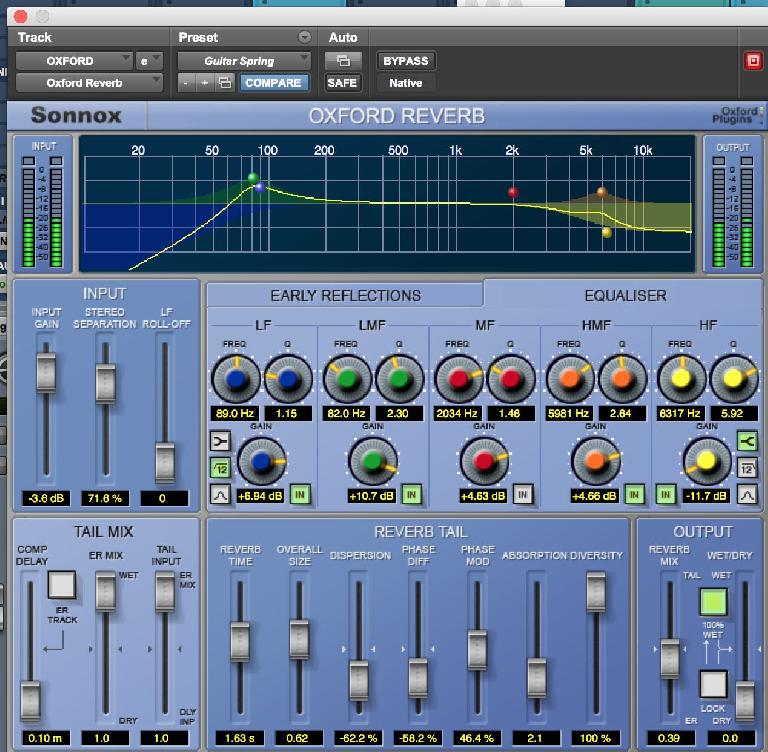 The Sonnox Oxford is a highly versatile plug-in that covers a lot of ground. In this instance, I called up the Guitar Spring preset and went right to the EQ tab. From there, you can grab any of the 5 EQ bands and cut or boost the spring frequencies as needed. Since the Telecaster was already bright, I cut the HF around 6 kHz with a slight shelf. This took some of the harshness out of the spring and allowed me to turn it up louder. To thicken the sound up even more, I did a slight boost around 80Hz. Also, another benefit of the Oxford Reverb is that you can control the Reverb Mix in the Output section blending between Tail and ER (Early Reflection). On this track, I used a bit more of the ER and blended in just a bit of tail. Also, by using more ER, you can make the spring a bit ‘shallower’, meaning it has more front end sound than depth. That can come in handy if the production needs an upfront tighter reverb. 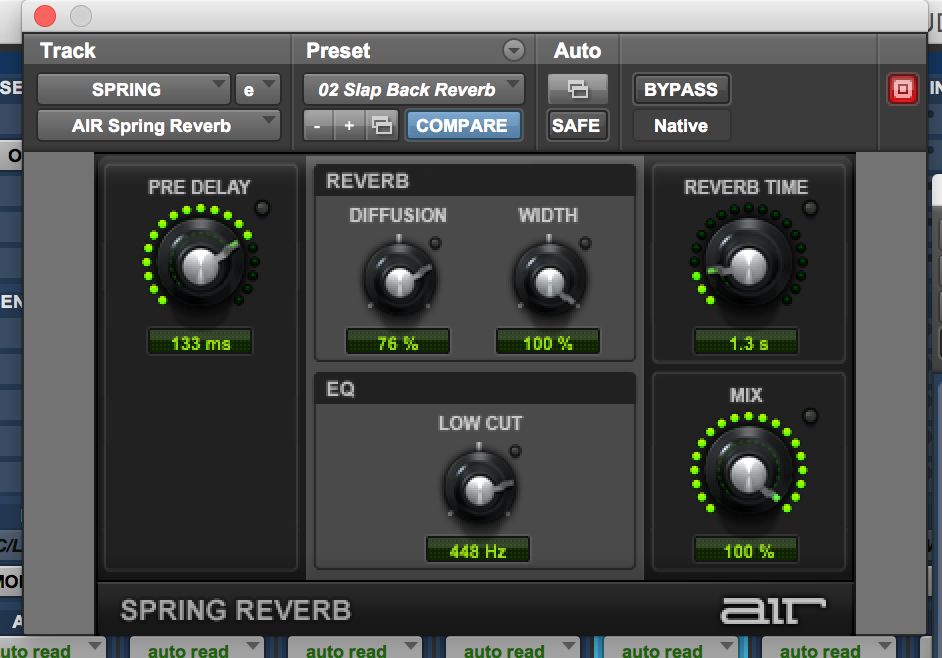 This is part of the Creative Collection in Pro Tools from Air Music Technology, and is also available in AU/VST format. The Air Spring Reverb is another one that has only a few controls but can go a long way. I called up the Slap Back Reverb preset, and pushed up the Pre Delay until there was a nice slap on the initial guitar transients of each chop. Tightening the Reverb Time to a short 1.3 seconds and pushing the Diffusion up the around 75%, it became a quirky, dark reverb with a very unique sound. I like that you can just move a few knobs around and within seconds, get a useful tone out of this plug-in.