All Articles News
5 Ways Apple's MacBook Pro Touch Bar Could Be Used To Control Music Software
Rounik Sethi on Thu, October 27th 5 comments
Language
If you're a Mac based musician or producer you'll likely have heard about Apple's new Macbook Pro and the revolutionary new Touch Bar interface. Here's 5 ways we'd like to see it used with music apps.

Apple’s big MacBook Pro refresh announcement on Thursday 27th October 2016 brought with it not only a redesigned exterior and beefier processor speeds for their pro laptop range, but also an exciting new dynamic interface feature.

The Touch Bar is “a Multi-Touch enabled strip of glass built into the keyboard for instant access to the tools you want”. Already Final Cut Pro X 10.3 supports the Touch Bar and, amongst other features, allows users to scroll the project using the Touch Bar. It’s a bit like having a touch screen without causing arm fatigue by reaching up to touch the main display. And this looks to be an impressive way to accomplish a number of features in a variety of apps while still having your hands close to the keyboard.

However, Logic Pro X and other DAWs and audio apps and plug-ins don’t yet support the new Touch Bar. So, here are 5 features we’d like see the Touch Bar support in your favorite audio production software.

Probably the most obvious use of the new MacBook Pro Touch Bar with all DAWs is as a Transport. The Rewind, Forward, Stop, Play, Play from Beginning and Record controls are easy enough to visualize. What about if other controls or displays from Logic Pro X’s (or most DAW) transport were present also? For example, Tempo, position of playhead, key, signature, MIDI input, etc.

Much the same as Final Cut Pro X 10.3, it would be great if you could swiftly scroll through a zoomed out version of your project in one fell swipe. The retina Touch Bar could be ideal for getting an overview of your entire project while you’re zoomed in on the MacBook Pro’s main display.

Using Logic Pro X as the example here again because of its Smart Controls (screen controls that can be customized and mapped to multiple audio plug-in controls). The Touch Bar feels like the perfect place to display smart controls and to make changes or write automation in real time.

It looks like GarageBand X has been updated while yours truly is writing this and in many ways it’s no surprise to see this feature included. Mute, Solo, Record Enable and Input controls for the selected track would be ideal. And not forgetting the level fader and pan control too.

Let’s not pretend you’ll be able to do super-complex audio editing using the Touch Bar. But you’ll likely be able to select sections of audio, split, duplicate and even add audio to a sampler instrument. If developers are really clever, there could be a simple way to time stretch the selected audio too.

I’m sure the Logic Pro X developers are streets ahead when it comes to designing how the Touch Bar could be used with Logic—and they’ve had a head start after all. I’m particularly interested to see how other DAWs like Ableton Live, Bitwig, Cubase and Pro Tools decide to utilize the Touch Bar. It would be fascinating to see how Native Instruments might choose to create controls for Maschine or Traktor Pro too.

I'd also love to see the Touch Bar operate as a MIDI controller, perhaps it could be used to trigger drum pads in Ultrabeat or Drum Kit Designer. Alternatively, it could be useful as a pitchbend or modulation controller...

If you have ideas for how you’d like to use the Touch Bar with your audio production software leave a comment below.

Rounik Sethi
Rounik is the Executive Editor for Ask.Audio & macProVideo. He's built a crack team of professional musicians and writers to create one of the most visited online resources for news, review, tutorials and interviews for modern musician and producer. As an Apple Certified Trainer for Logic Pro Rounik has taught teachers, professional musicians and hobbyists how to get the best out of Apple's creative software. He has been a visiting lecturer at Bath Spa University's Teacher training program, facilitating workshops on using music and digital media tools in the classroom. If you're looking for Rounik, you'll most likely find him (and his articles) on Ask.Audio & macProVideo.com.
Related Videos
Comments (5) 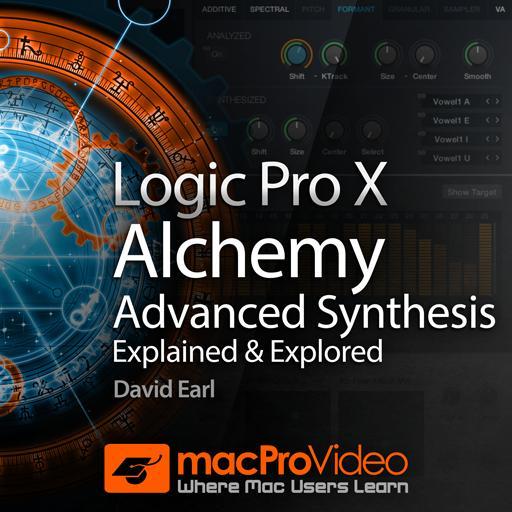 Dream It. Do It.
Do you want to learn Alchemy - Advanced Synthesis Explained and Explored?
Yes, I want to learn!
No Thanks, I just want to read the article.
Feedback
How are we doing?
We'd love your thoughts, feedback and questions regarding our new site. All feedback is appreciated!
We do not respond to this form! If you need support, please visit our support page.
Thank you for your input!
Your message has been successfully sent
Course Advisor
Don't Know Where To Start?
Ask A Course Advisor