All Articles Logic Pro
6 MIDI Tricks & Features in Logic Pro X You May Not Know
Jay Asher on Thu, November 22nd 0 comments
These MIDI tips for Logic Pro X go beyond the basics - how many of them did you know about?

1. MIDI Is Being Recorded Even When You Are Not In Record

Here is the scenario: you load up a software instrument, hit play, and
start improvising. Somewhere along the line you think to yourself, “Oh man, that was great! Why oh why was I not in record to capture it?” Guess what, in a sense, you were, thanks to a feature called Capture Recording. There are a couple of ways to access this feature. You can add it to the Control Bar as you see in the next two pics. 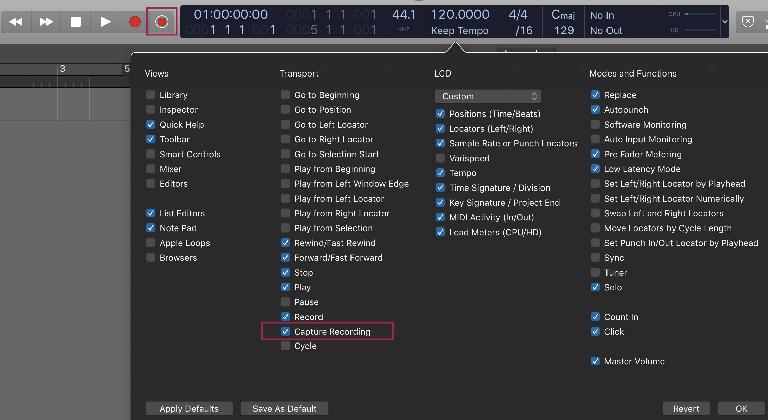 Now next to the Record button is the Capture Record button. Alternatively, and my preference -  is to simply press the default key command Shift&R. Now when you play and are not in rerecord and you have that great performance, you can simply capture it with Capture Recording.

2. Track Alternatives Is A Great Recording Preference To Get A Great Performance

In my Recording Preferences, I have chosen Create Track Alternatives for Cycle Recording. 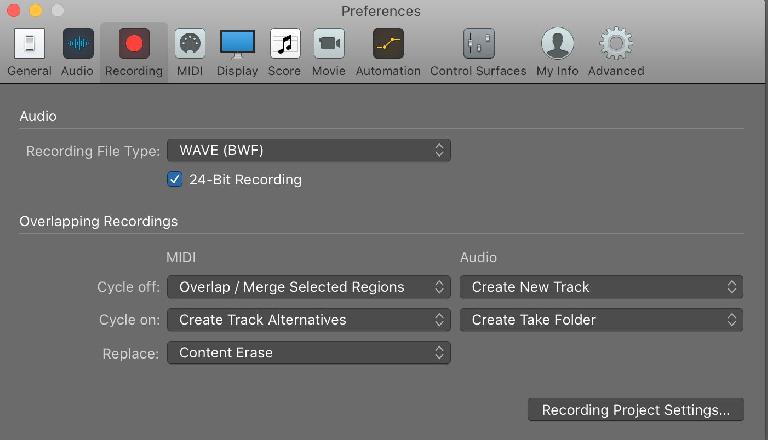 So now I play a 4 bar bass part three times and I see and can hear the third pass, named C by default.

If I hold my mouse down on the C I have the option to choose the second pass, named B.

Well, that is fine, but there must be a better way to audition and finally choose from the three, and of course, there is. 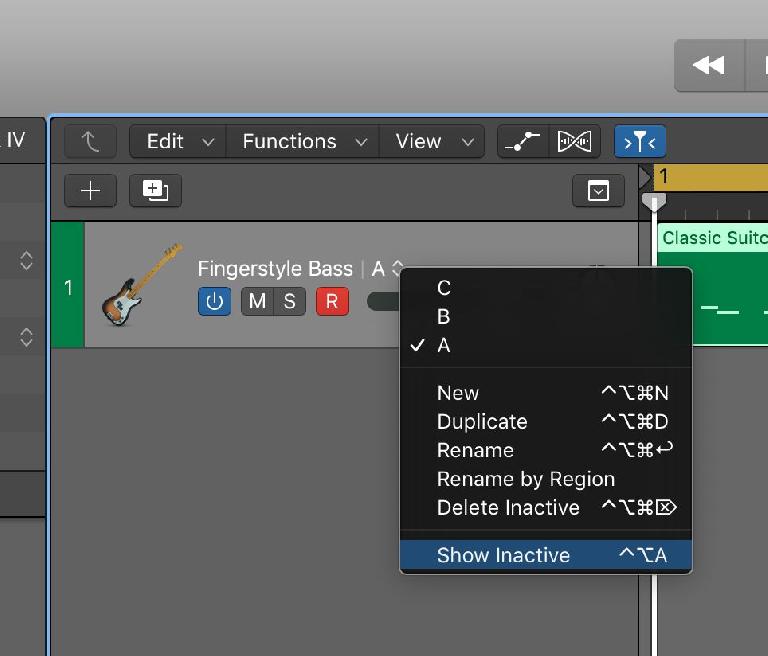 By choosing Show Inactive I see all three. Clicking the power button to the left of each region makes it the Active pass, and then clicking the Up arrow next to it moves it to the top. I then have the option to delete the inactive passes or simply hide them. 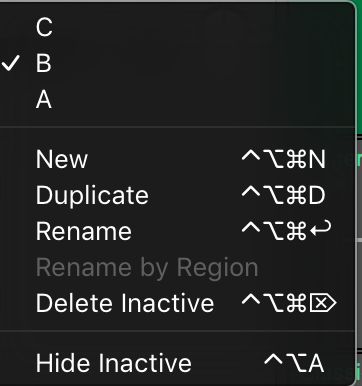 Track Alternatives also works with audio, but I prefer Take Folders for audio because of the Swipe Comping, while I prefer this for MIDI because you cannot Swipe Comp in MIDI Take Folders.

3. Groove Tracks Are A Great Way To Have Other MIDI Performances Feel Like An Already Recorded and Quantized Region

My drums and bass do not feel like they were playing together in this example.

But with these Quantize Settings the drums feel just the way I want them to. 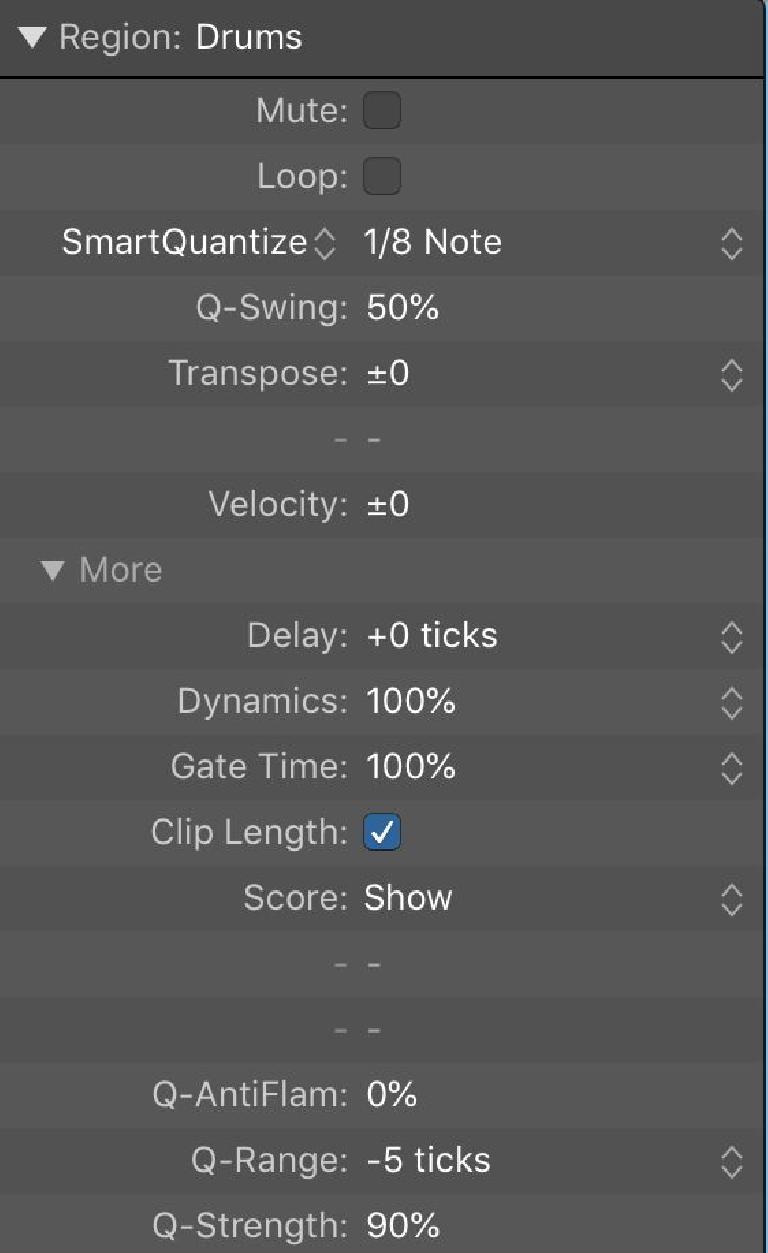 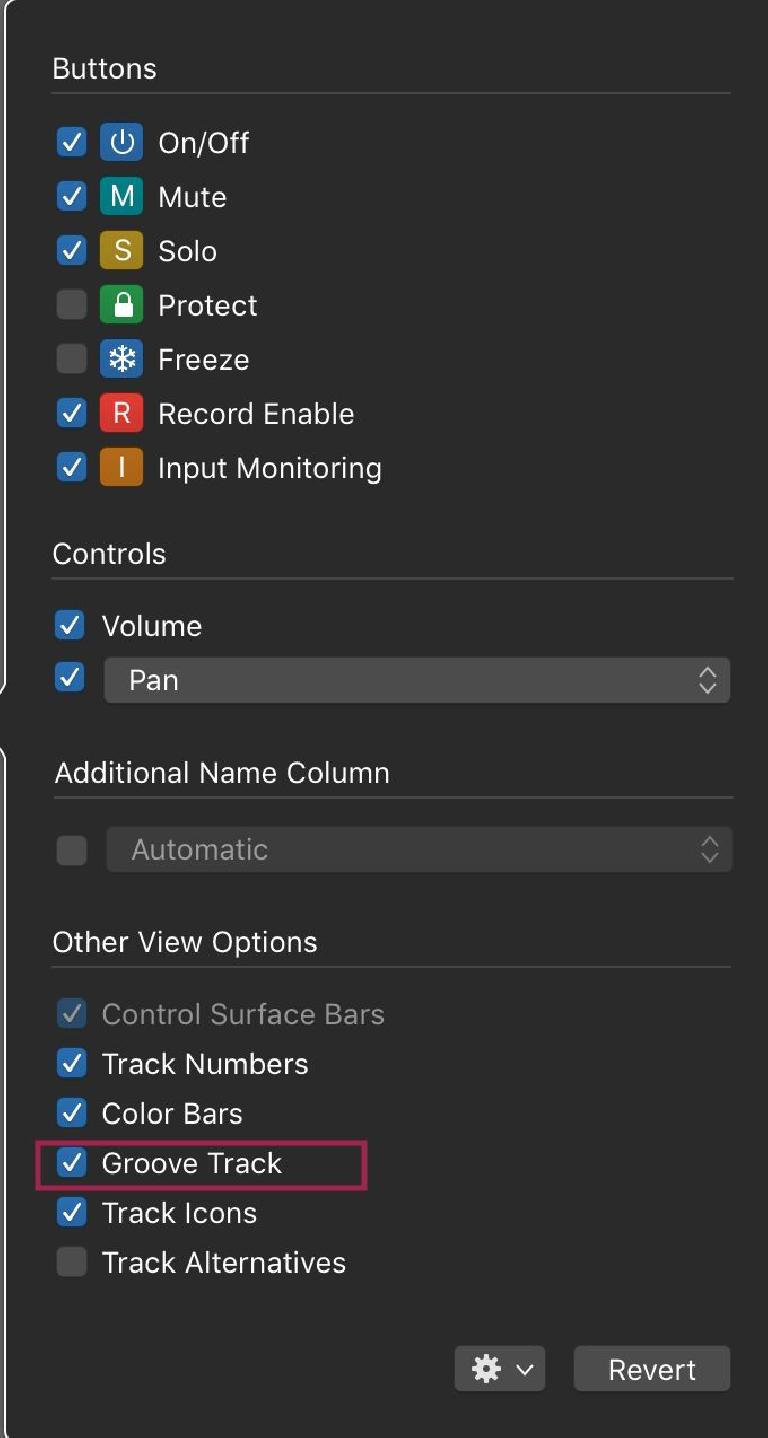 If I move my mouse to the left of the Drums Track Header I see a gold star that I can check. This tells Logic Pro that this track will be the guide track, and all other tracks will have a check box to tell them to follow the leader.

Now they are grooving together!

4. MIDI Transform’s Humanize Is Your Friend

Here I have played in a melodic guitar lead, somewhat reminiscent of The Beatles' ”And Your Bird Can Sing.”

I want to now play it in thirds as that song does, but in a hurry. Well, duplicating the channel strip, option-dragging the region to copy it and transposing the notes was pretty easy, but the performances are of course identical and too close. Humanize to the rescue! 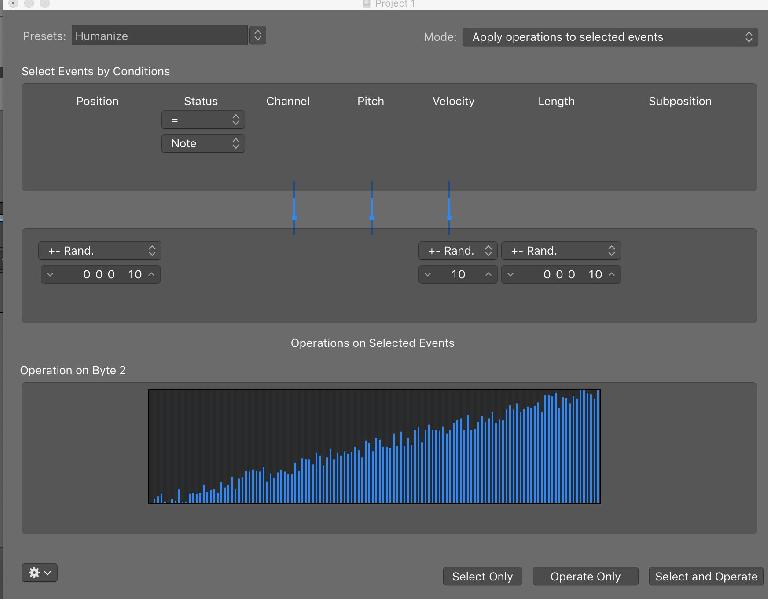 Humanize gives me the option to randomize the position, velocity and length of all the notes in the region or just those I select. It defaults to randomizing the position by +- 10 ticks, not that much since Logic is 240 ticks per 16th note, but a nice variant. It has the same defaults for velocity and length, but you have a lot of options for each. 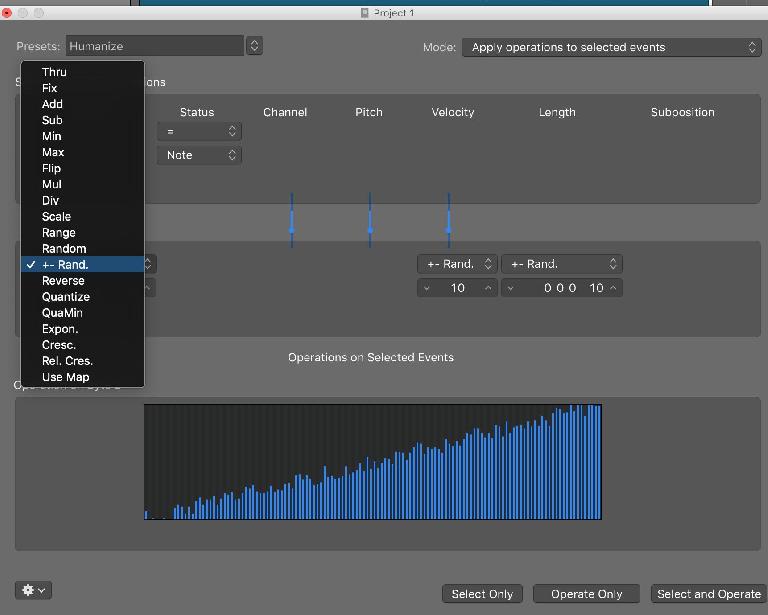 For now I will live with the defaults on all the notes. I press the Operate button twice and voila, here is my result.

I Love some Mellotron with a damper pedal.

But in the picture the note length does not reflect how long they actually sound and if I choose to alter the length afterwards, I will not be making an informed choice. 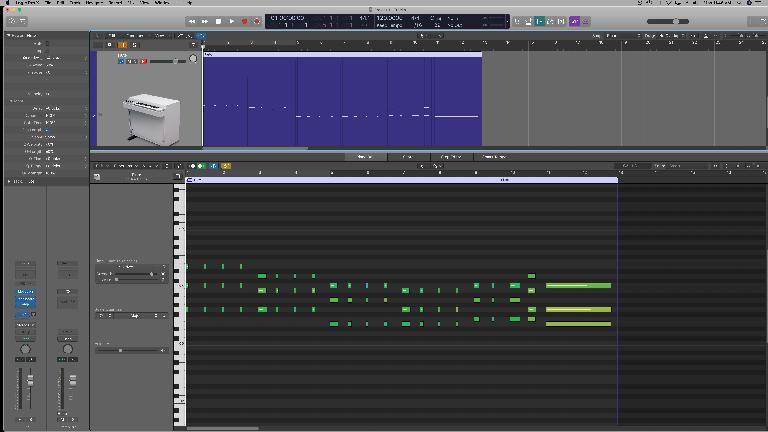 I need to convert the sustain pedal to the note lengths. Easy Peasy.

But maybe that caused the notes to overlap too much? Trim to remove overlap is the solution.

Now if I like I can select all the notes in the Piano Roll and shorten them and get an entirely predictable result.

6. MIDI FX Plug-in Other Than the Arpeggiator

When the developers finally implemented MIDI FX plug-ins, the user base went crazy with happiness. Finally, we had an arpeggiator that did not require us to go into the Environment and cable things together.

Here is the Note Repeater. I chose the Octave Shifter preset and modified it by turning off the stepped delay button and adjusting it to 280 ms. I changed the default number of repeats from 8 to 4 and altered the velocity ramp from the 80 default to 70. 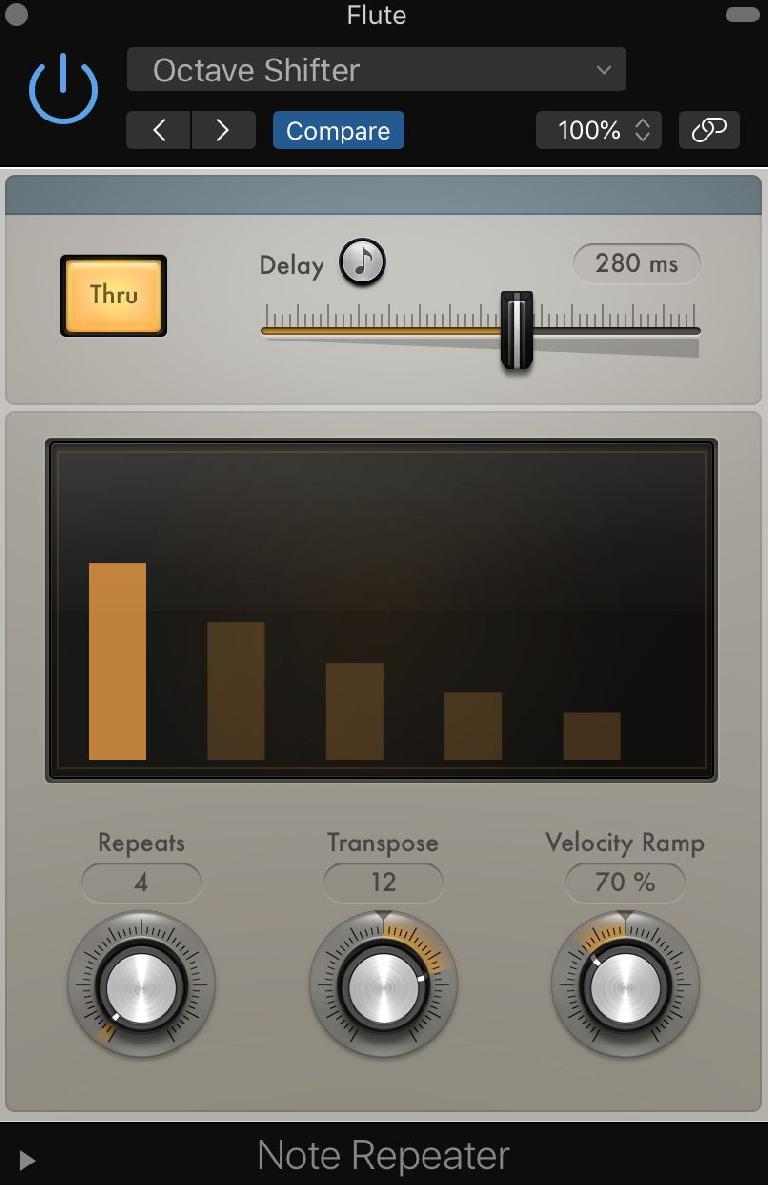 But now let’s go really crazy and add the Modulator, load the Decelerating Vibrato preset, start tweaking it, and automate it to bypass on the final chord. 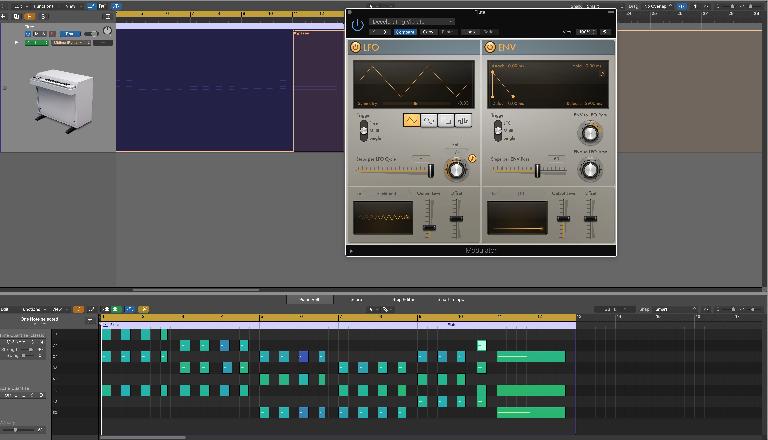 Too much fun!
Learn Logic Pro X inside out with hundreds of hours of pro video courses: https://ask.audio/academy?nleloc=category/audio/application/logic
Related 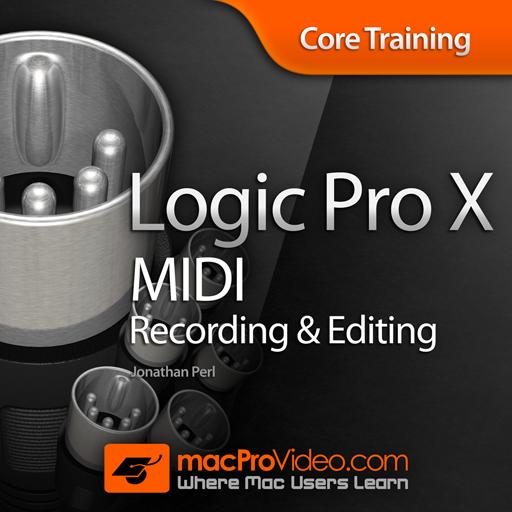 Dream It. Do It.
Do you want to learn Core Training: MIDI Recording and Editing?
Yes, I want to learn!
No Thanks, I just want to read the article.
Feedback
How are we doing?
We'd love your thoughts, feedback and questions regarding our new site. All feedback is appreciated!
We do not respond to this form! If you need support, please visit our support page.
Thank you for your input!
Your message has been successfully sent
Course Advisor
Don't Know Where To Start?
Ask A Course Advisor