All Articles Mixing & Mastering
Adding Analog - Style Tape Saturation Effects To Your Productions
Joe Albano on Mon, January 23rd 0 comments
Language
The sound of tape can lend warmth and authenticity to your tracks. Here's how to get the analog effect using digital tools.

When digital recording came along and gradually eclipsed analog hardware, it didn’t take long for engineers to come to miss the very flaws and limitations of analog equipment that digital was supposed to have “fixed”. They realized that the inevitable distortion that resulted from the use of analog circuits like tubes, transistors, and transformers was the source of the elusive warmth and presence that analog recordings had in spades, and digital media sorely lacked. And chief among these flaws was the gentle compression and soft edge that occurred when audio signals were recorded hot to analog tape, overloading that medium and causing the effect known as Tape Saturation. 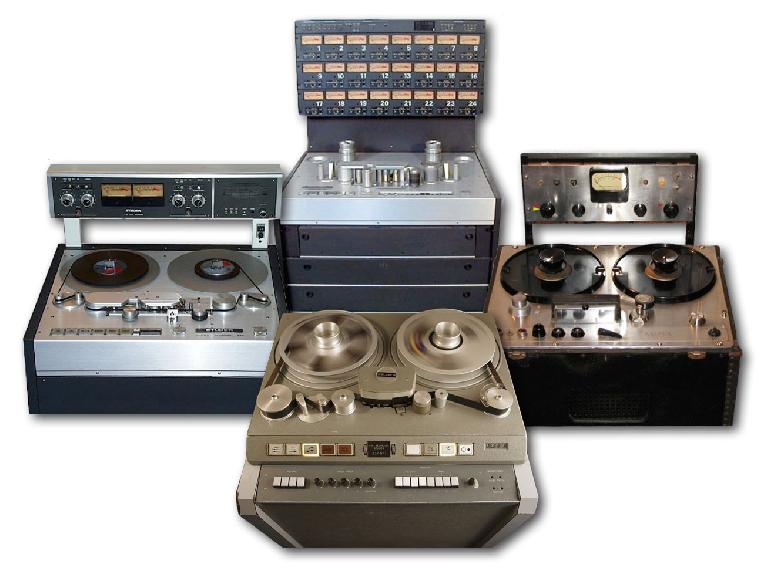 The tech of tape

A little technical background: magnetic tape contains microscopic magnetic particles which are rearranged by a magnetic field from the tape machine’s recording head, which converts electrical signals from mics and other recording sources into that magnetic field. As the tape is pulled past the recording head, the particles on a blank reel of tape, which are randomly oriented as to magnetic polarity, are re-oriented to follow the positive and negative swings of the audio waves to be recorded. They retain their new state, and that’s how the audio signal is preserved on tape. 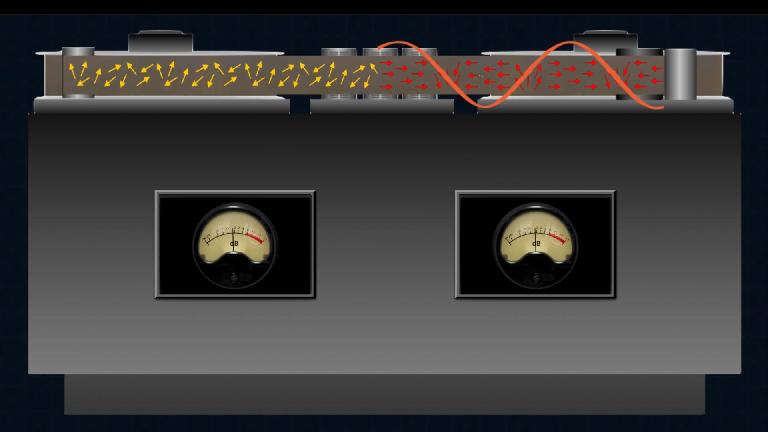 The mechanics of analog tape recording

But when the incoming audio signal exceeds the point where the tape’s magnetic particles can accurately track the converted voltage swings, then this results in gradual clipping of the positive and negative peaks of the wave that’s being imprinted on the tape. This is tape saturation - the audio is subject to very slight compression and subtle harmonic distortion (assuming the incoming level is not pushed too hard and the resulting effect is not overdone). The saturation happens very gradually, for a unique warmth and edge, and recording engineers learned to take advantage of it for a full, rich recorded sound right off the bat. 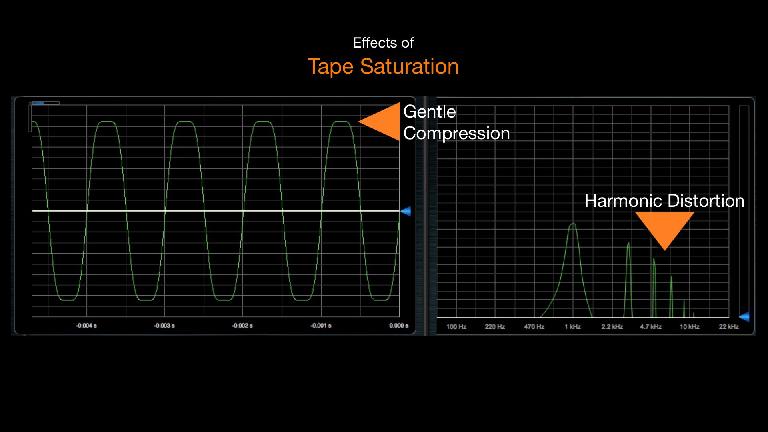 Back to the future

Recordists who had long taken the lovely warmth of analog for granted from both electronics and tape understood that if they still wanted that desirable character in their recordings in the digital age, they were going to have to add it back in deliberately. Gradually, analog gear that had been discarded as old and outdated was sought out, and this hardware was re-introduced to otherwise all-digital setups. Outboard gear like tube preamps, EQs, and compressors were put back in service as an analog front end, to pass signals through on the way in to recording, imprinting some of their distinctive character on the digital audio files. And these same devices were employed in mixing as well, pulling signals out of the digital domain back into the natural world for mixing and processing.

But tape saturation proved to be one of the more elusive and subtle analog “flaws” to simulate with ones and zeroes. For years, engineers who wanted that particular quality still sometimes went to the trouble of recording to actual tape, for its unique character. Eventually though, digital simulations of tape saturation improved until they were able to do a creditable job of providing that particular effect (thankfully, since working tape machines and analog tape itself was becoming harder to come by), and the character of tape became available to any recordist who could afford a plugin.

Tape in the box

Cut to the present, and tape saturation - mostly software-modeled - has become another standard tool in the modern engineer and mixer’s box of toys that impart analog character. There are quite a few plugins that offer good simulations of the effect of recording to tape, in many cases with comprehensive controls for fine-tuning the specific character of the emulations, for discerning mixers who have the sound of a particular tape effect in mind. UAD offer plugin emulations of classic Ampex and Studer tape machines, as do Slate, Avid, and Massey.  And Waves models some specific classic tape machines in their Kramer and J37 plug-ins - the J37 emulates Abbey Road’s modded Studer 4-track (of the Beatles’ Sgt. Pepper album). Some DAWs even include the effect, sometimes within other effects: for example, Logic’s Tape Delay plug-in includes controls for adding analog tape characteristics to the delayed signals. 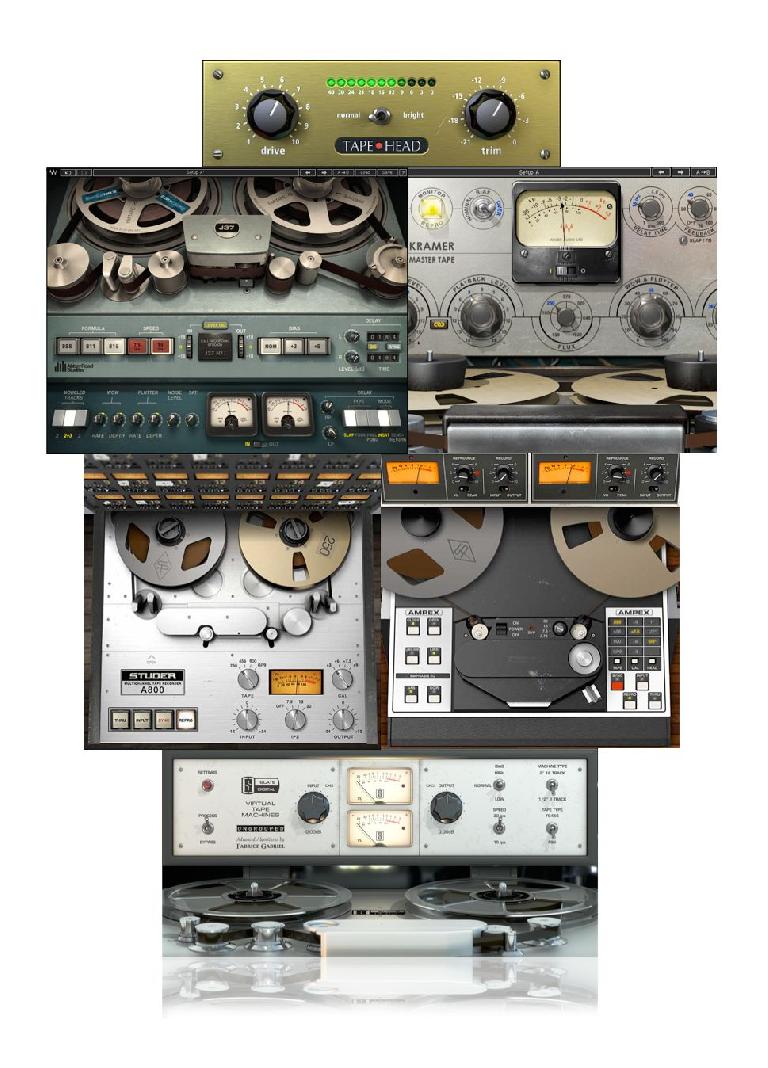 Most of these models of tape machines incorporate not only the saturation effect but also the mechanical artifacts of tape: the wow & flutter (subtle pitch & amplitude modulation) from imperfect tape transports and the contribution of the tape machine’s electronics as well. But the main event is the saturated sound of tape itself. So how can you utilize these tools to add a little of the magic of magnetic tape to your projects?

The tape saturation effect can be applied to anything that seems like it could benefit from a little added warmth, especially when a very subtle effect is called for. But there are a few classic applications that engineers have long preferred to utilize tape for.

One popular use for tape is recording drums. When multitrack drum recordings were made on tape machines back in the day, the strong transients, especially from close-mic'ed signals, inevitably incurred some degree of saturation from magnetic tape. This imparted a rounder, fuller sound and a bit of compression to the drums, which resulted in fatter-sounding kicks and snares and some nice overall cohesion to the kit as a whole. All-digital drum recordings sometimes can sound a bit thinner (though it may be a more accurate reproduction, the sound of recorded drums has always been at least a bit larger-than-life,) and while other processing was and is applied to that end, tape always contributed subtly to that quality.

Even well into the digital era, many engineers still initially recorded drums to real multitrack tape, just to get “that sound”, only to dump those recordings immediately into their DAWs for all the power and editing convenience the digital medium had to offer. Nowadays, plugins are more commonly used when the specific qualities of tape are desired. A typical approach might be to insert tape emulations on key tracks like the backbeat, kick & snare, and on overheads and/or the stereo drum submaster (Aux). 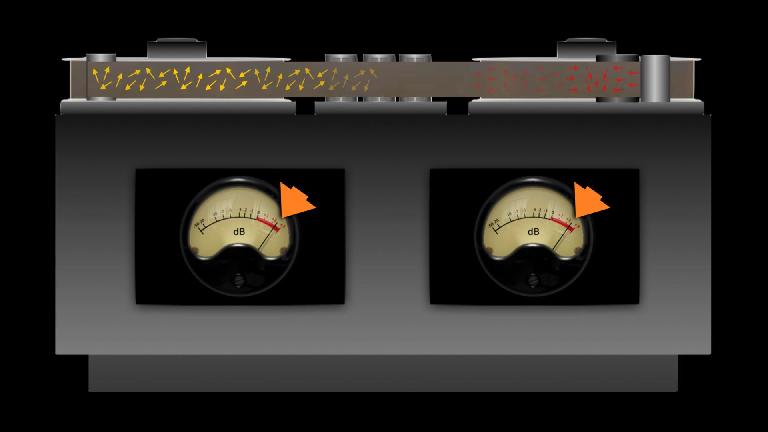 Bass is another instrument that can benefit from a fair bit of the distinct character of tape saturation. It can be a nice alternative to using a bass amp (modeled or re-amped) or tube compressor to warm up a DI’d bass track. Avid has a product called HEAT (Pro Tools HD only), implemented as a kind of “global plugin” that adds the tape saturation effect to all audio tracks in a virtual mix via individual plugins controlled by a single interface. The idea is to emulate the overall warmth you’d have gotten in the tape era, where every track was subjected to the same specific saturation character of the tape machine in use for a given session.

When a mix is done and it comes time to bounce down to the final stereo audio file, many engineers have always liked to bounce to an analog 2-track as they feel the effects of tape can bring some subtle warmth and overall cohesion to the mix, even if it mostly consists of digitally recorded and processed tracks. Of course the amount of tape saturation you’d want for this application would be significantly less that you might add to, say, a drum kit, but even so, a little can go a long way..

When a real analog 2-track and a suitable reel of tape is handy, some engineers/producers like to do two bounces simultaneously: one to disk within the DAW as usual, and the other sent out the interface to the tape machine. The analog tape recording is then brought back into the DAW, and the two versions are compared: whichever one serves the mix better is ultimately used. Engineers who do this point out that the tape bounce isn’t always the best option for every mix, but many times tape’s contribution is just what the doctor ordered. Of course nowadays you could also do this in the box by optionally inserting a suitable tape emulation plug-in on the Master LR Stereo bus, setting it for an appropriately subtle degree of tape effect, and bouncing both with and without it.

There are so many tools available these days for adding analog character to our digital recordings and mixes that it can be hard to decide which ones to bring to a project. But a nice subtle dose of tape saturation, if applied appropriately, can often help. After all, some of the best recordings ever made had that character on every track and you certainly can’t go wrong using the sound of those classic tracks as a guide. 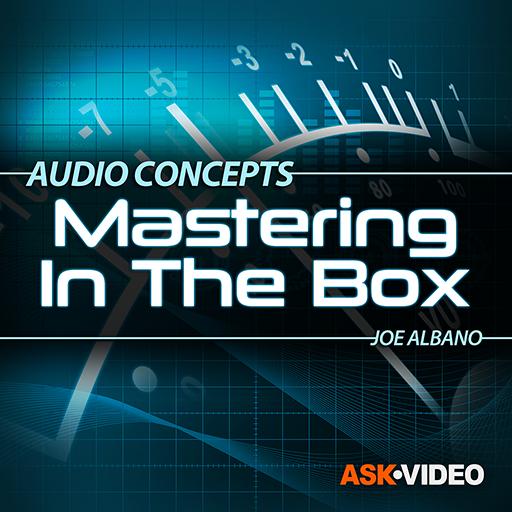