All Articles Audio Software
Creating Drum Patches in MicroTonic That Morph
G.W. Childs IV on Fri, July 14th 0 comments
MicroTonic is a cool synth and unusual in that it is able to exchange sounds with the Pocket Operator PO-32. G.W Childs shows you how to use the software to make morphing drum patches.

While the default sounds of Teenage Engineering and Sonic Charge’s PO-32, or Tonic are amazing and the A and B knobs of Tonic allow you to customize the internal drums to an astounding degree, Microtonic, the older software brother of Tonic, is capable of hooking up his younger brother with many different types of sounds far beyond what the two knobs can give you. In this tutorial, I’d like to show you how to make drums for Tonic, with Microtonic.

Before I go further, I should explain that Microtonic is entirely a synthesizer. It may produce drum sounds but they are synthesized drums sounds. So unlike sampled drums found on most drum machines, there are no recordings to move from Microtonic to Tonic. We’re just moving data. This is extremely important to understand, as Tonic’s B knob is a Morph knob, and the way that it morphs between drum sounds or drum patches is by parameter modification used to create the sound in the first place.

Microtonic gives you way more access to the parameters available within the synthesis engine used in both Tonic and Microtonic. Because of this, we can really exploit the B (Morph) knob for additional cool features that normally wouldn’t be even available on Tonic, like storing different drums in the A and B positions, for additional sounds, ADSR modifications, and even distortion. Let me show you what I mean. 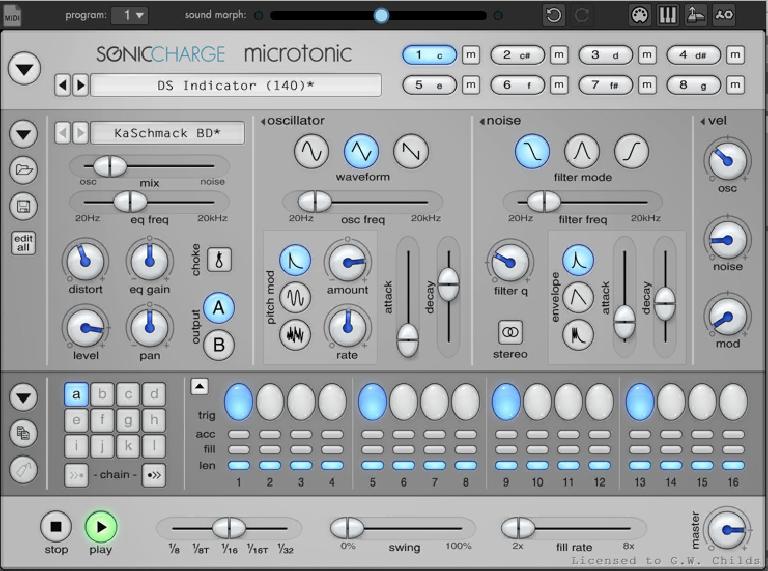 I’ll move my Morph Slider all the way over to the left, A position. By doing this, I am safely designating the Left (A on Tonic) Position as my starting Morph Point, as it will eventually carry over to Tonic. 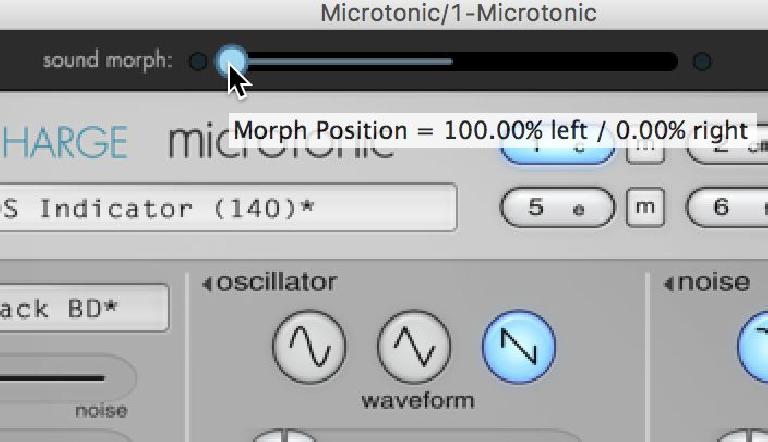 Now, I’ll initialize my starting patch so that I can start morph position A with something entirely new, and of my own design. To do this, I’ll go to the Drum Editor dropdown menu of Microtonic and select Initialize Drum Patch. When I do this, I am only initializing the current drum channel, and not all 8 drums that are contained within a Microtonic Drum kit. This is handy to know, as creating 8 drums for a patch is a lot of hard work. But creating one drum patch at a time doesn’t require nearly as much commitment, or time to program. 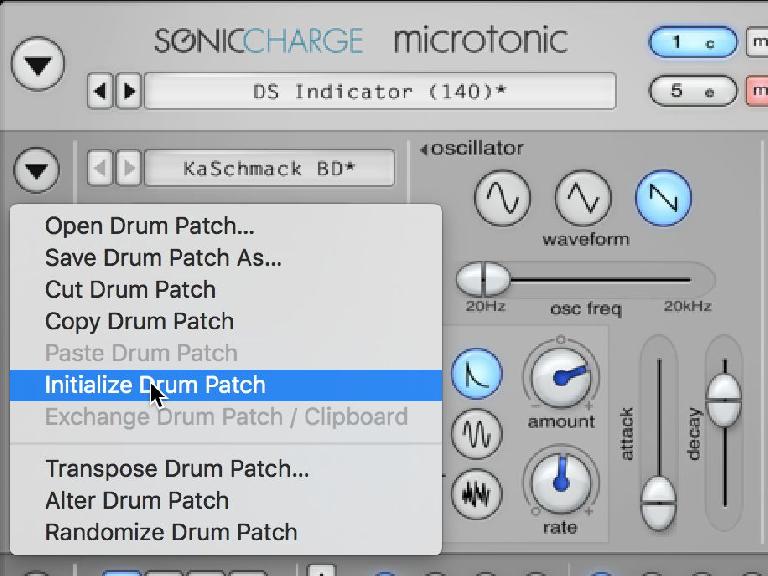 Now that I am on a default patch, and I’m initialized in the Left (A) position, I can build out something unique, only to later build something else. More on that soon!

A very important slider in Microtonic is the Mix knob, as it is kind of a rudder for determining the kind of sound you’d like to start off creating, to some degree. For example: I tend to prefer kick drums in Microtonic devoid of white noise, which is entirely the Noise section of Tonic. I tend to use the Noise section for Snares, Hi-Hats and Claps though you can easily use it for a kick. This is just my method for kicks, not the de facto. I’ll move the Slider to the left, over where it’s devoting my patch entirely to the Oscillator section.

In the step sequencer below, I can either drop in a basic beat or use the existing pattern and hit the play button, so that I can hear what I’m programming, and jam out a little. I’ll also adjust the tempo in my host sequencer that matches what I’m after for a beat, in general.

Tip: I can hold the Command button and press the M, or Mute button next to the Channel I’m currently working with, and solo it. Now, I’m only hearing the current drum I am creating, which is going to be a kick drum.

In the Oscillator section, I’ll use the Osc Frequency knob to lower the pitch of the current drum channel down to a lower pitch more suitable for a kick. Note: Microtonic informs you of the Note of the Pitch you’re currently at, as you adjust the slider. This is valuable for hip-hop, melodic kick basses where you sometimes need to know the root note of the drum! 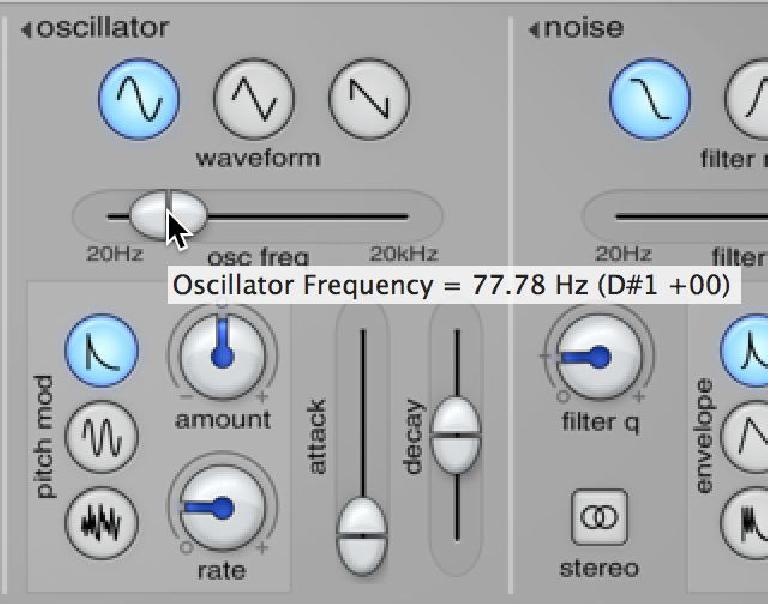 With a lower tone bouncing along, now, I’ll raise the Amount knob of the Pitch Modulation section which introduces the amount of bend that takes place in a kick based on the current Waveform setting represented by the three graphical buttons to the left of the Amount Knob. Now, I need to adjust how fast or slow or the Rate at which the pitch bend takes place. I’ll raise the Rate knob up until the point that I start to feel the bump, and push of the fledgling kick drum. 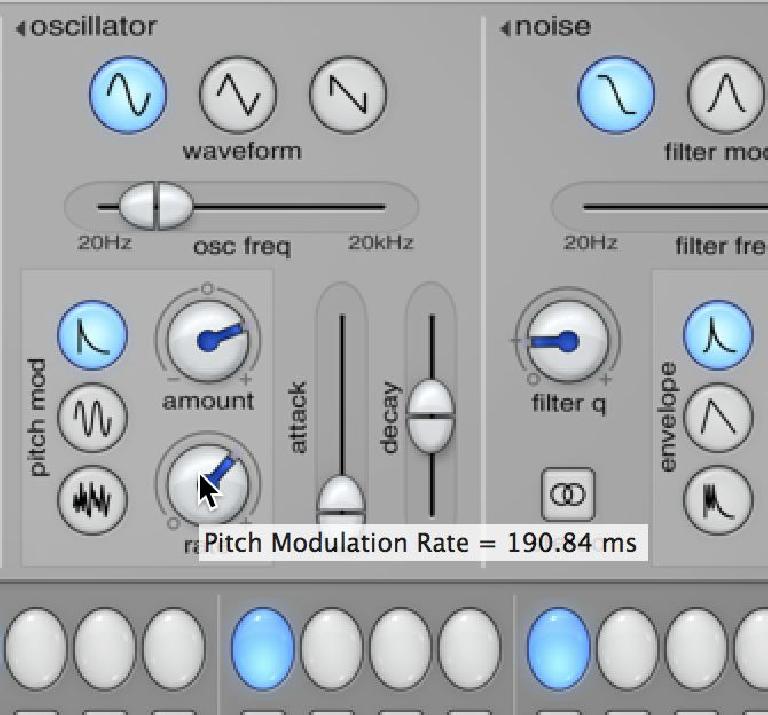 Then, I’ll raise the Decay up until the thump and push are evened out, and my kick feels balanced. Not too much on the beginning, not too much at the end. A basic, solid kick drum. 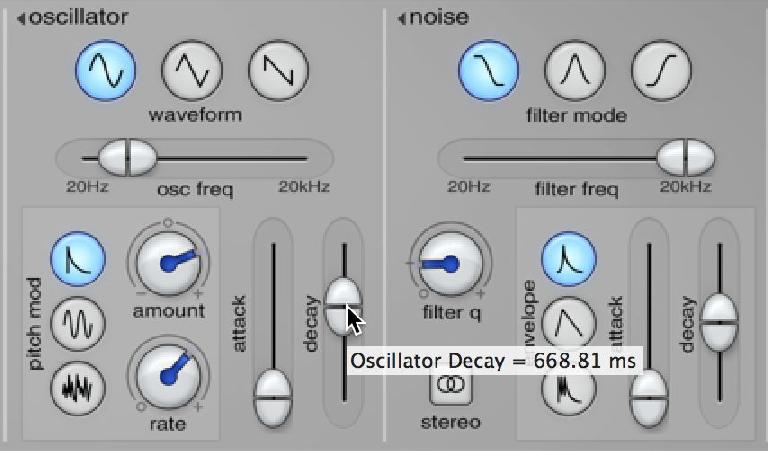 Now that I have a basic kick drum that works for me, I’d like to save it, just as a snap shot of a drum that sounds good to me. I’ll use the Drum Editor drop-down menu to select the ‘Save Drum Patch As…. I’ll label it something pertinent to the drum I’m trying to design. Now that the A position is dialed in for my future Knob B morph, I’ll move the Morph slider to the opposite position in polarity from the original setting. By doing this, I can drop in a new patch and make this the target destination for the morph slider, from the last kick drum I made.

With the Morph Knob now in an adjacent position, I’ll select another patch, perhaps this time from the factory sound bank. Even though I’m loading over my saved patch, the original patch’s settings are still kept in the far left position. And, by putting in a different drum altogether, I’ve given myself a secondary drum sound, when Tonic’s B knob is turned all the way to the right, as opposed to the default position which has settings for my original kick drum. Listen as the Morph Knob moves from left to right:

That’s a total transformation! Now, all I have to do is use the Data Transfer Menu to send my sound over to Tonic! Check your Tonic manual for how this takes place!

Realistically speaking, you can have 32 drums stored on Tonic, as all 16 drums have an A and B position setting. But, you can only set this up through MicroTonic. So if you’re a Tonic user that does not have Microtonic, yet you might want to go grab it…. Now. If you’re a Microtonic user that does not have Tonic… Well, you know what you need to do.