All Articles Logic Pro
Creative Side Chaining Techniques in Logic Pro X
Darren Burgos on Mon, June 6th 0 comments
Language
Adding motion to static sounding tracks in your song can transform them into something more interesting. Here's 3 tips on using Side Chain in creative ways to add movement, stutter & groove in Logic.

What is Side Chain?

First let’s talk about what Side Chaining actually is and how it works. It’s simply a way to receive a chosen stream of audio directly into a plugin, and use that audio to trigger different events like filter cutoff and amplitude/volume changes. The signal “shapes” the parameter with its amplitude so it’s great for humanizing and adding groove to static loops. Commonly used in a compressor (with a kick as its source), it can create that classic pumping feel where everything dips in volume when the kick hits. In the tips below, however, I’ll show you three creative and less common uses for side chain.

Filter a Sound with Your Drums or Any Audio

Logic’s AutoFilter effect works great with a Side Chain source. In this quick tip, we’ll use it to add synchronized motion to your chosen track by either using the song’s drums or any other source. This works great on held chords, pads and longer held bright bass parts.

If you’ll be using your song’s drums, first, output each individual track to an available bus by changing the track(s) output from Stereo Output to an unused bus. You can do this without affecting your drums in any way. If your drums are coming from Drum Machine Designer, you don’t have to reassign outputs at all, but you’ll have to find and take note of the bus number that the main DMD track is assigned to. You can do this in the mixer after expanding the DMD track. If your drums are audio or loops, change each track’s output to an available bus and remember the bus number. If you are using only one drum loop, or you’re using another source other than drums, just choose the track (by name) from AutoFilter’s Side Chain menu in the next step. 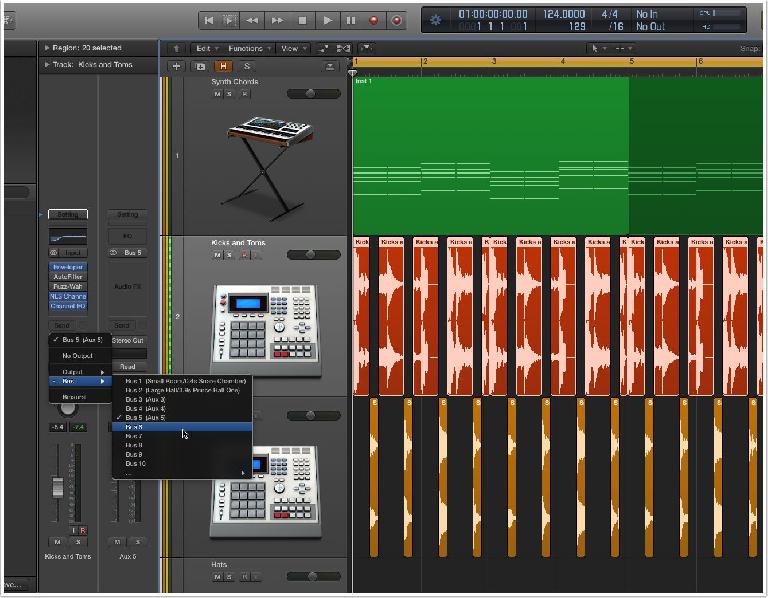 Now add Logic’s Auto Filter effect to the track you want to add some groove to. From its Side Chain menu (top right of plugin), choose the bus number you output all your tracks to. Bus track names are not viewable via the Side Chain menu as of yet. Audio are however, so if you’re using a single audio source, you’ll see the track’s name from the list. The effect should by default sound pretty cool, but there’s a lot that can be changed here for example, the Envelope slider raises the intensity of the effect. You can increase the Cutoff for a brighter sound. The Envelope below is actually what is shaping the sound, but your Side Chain source triggers the Envelope. By changing the Envelope ADSR you can drastically or minimally effect the feel of the movement on your track/sound. In the LFO section, you might add 1/4 note pump with a backward sawtooth wave and the rate set to 1/4. 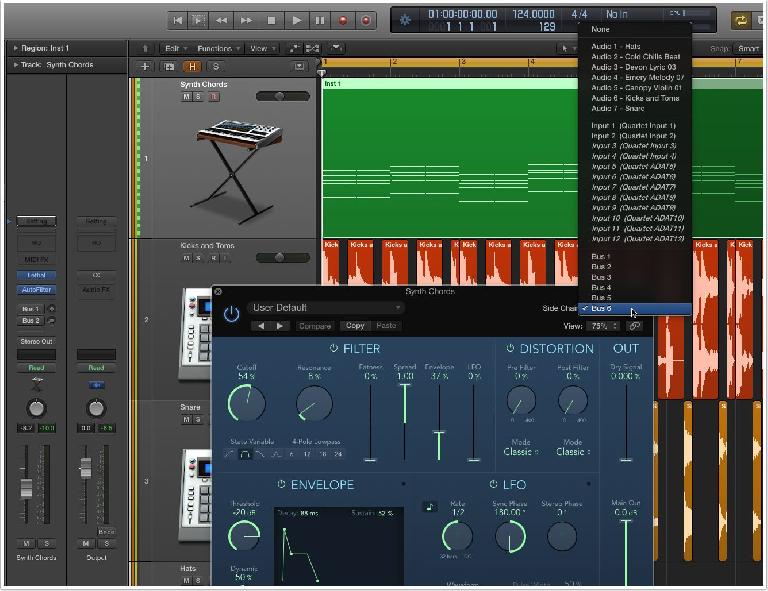 Here’s a quick sample of the effect on some synth chords. First the chords, then the beat (the side chain source), then the actual effect till the end:

Play and Gate Audio Through ES1

You can send your Side Chain signal through to Logic’s ES1 subtractive synthesizer. This can be insanely fun. Although the signal does not respond to pitch, you can rhythmically play MIDI notes on the ES1 that start and stop the Side Chain source (like a playable gate), plus use ES1’s filter and envelopes to shape the sound. Start by finding a sound in your song that needs some care. Name the track so you’ll see it easily from the Side Chain menu in ES1, and from the channel itself, change its output to “No Output.” Setting the track to No Output is a vital step; you don’t want to hear the original sound at all... only when playing notes on the ES1. 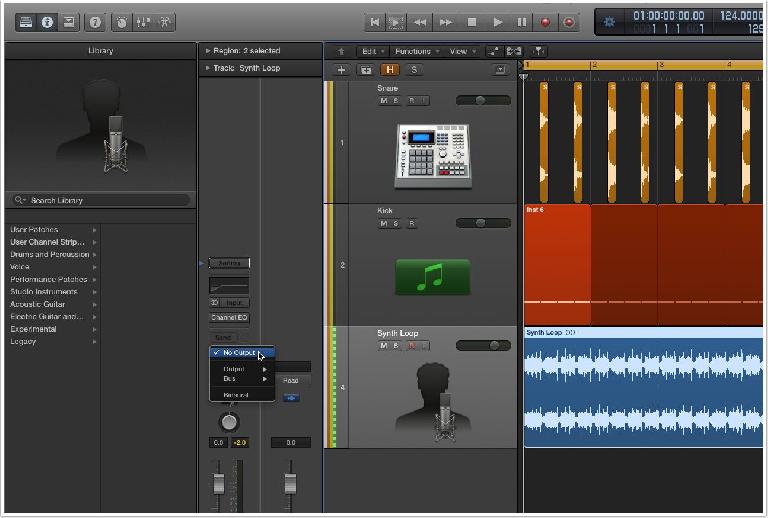 Create a new software instrument track and add an ES1. From ES1’s Side Chain menu choose the track you named from the list. Click back onto the ES1 track now and change the bottom oscillator to “EXT” for external. Pull the vertical slider between the two oscillators all the way down and to the bottom so only the bottom EXT oscillator plays. Start playback… this is, of course, vital since Logic has to “play” the Side Chain source back for it to be sent through to ES1. Play some notes on the ES1 like you would any synthesizer. The notes you hold trigger the side chain source track, and there is silence when no keys are pressed. 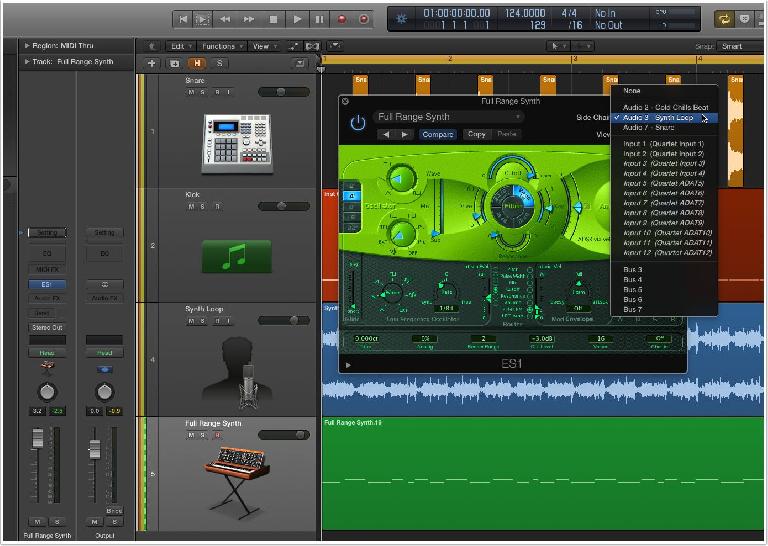 The sample below first presents the synth loop as is, then comes in till the end of the sample:

Use Audio to Open and Close ES2’s Filter Cutoff

Another cool and creative way to add modulation and movement can be done with Logic’s ES2 synthesizer. You can use your Side Chain source to open and close ES2’s filter and other parameters. Like using a super complex LFO shape, but that is totally dynamic depending on the Side Chain source. First choose your source material like drums or other rhythmical material. To keep it simple for this article I just choose a loop out of Logic’s loop browser.

Now open an ES2 synth and choose a sound you want to modulate. Set the Side Chain (upper right corner) to the source you’ll be using. I’m choosing the name of the loop I picked from the browser for example). From ES2’s router area choose both a “target” (in my case the Filter Cutoff 1) and a “Source” from one of ES2’s router blocks/columns. Choose “SideCh” from the source menu. Start playback in Logic so the Side Chain source you picked will play live through ES2 and start to slide the green range slider up. As you slide, the effect will be increased. Try experimenting with other targets like LFO speed, and detuning for other cool effects. 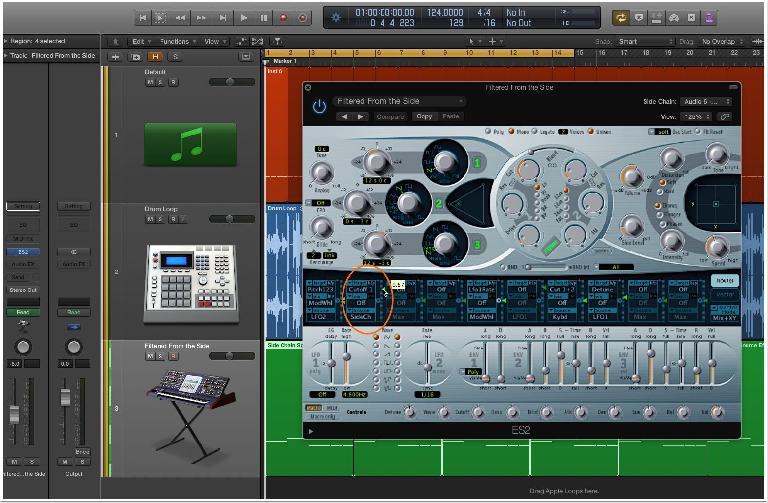 This sample starts with no modulation, then the effect comes in and is played till the end: