All Articles Recording & Production
Down and Dirty With Selection Based Processing in Logic Pro X
Matt Vanacoro on Tue, May 30th 0 comments
Logic Pro's ability to apply processing to specific sections of audio is incredibly useful for your workflow, saving you duplicating tracks or automating effects. Matt Vanacoro explains why.

One of my favorite updates to Logic Pro X in the 10.3.1 list is selection based processing. Many years ago, when I first decided to shift a majority of my work from Pro Tools to Logic, I accepted that no DAW ‘does it all’. I understood that along with instrument tracks, EXS integration, and an excellent notation engine (my main reasons for the switch), I would have to accept some compromises. One of the handiest workflow features of the AudioSuite plug-in setup of Pro Tools was that it allowed you to apply effects to a single region of audio within a track.

This was something I missed sorely in Logic. It definitely annoyed me that every time I wanted to apply a little ‘something’ to a region of audio within a track, I would have to create a whole new separate track for just that one region. 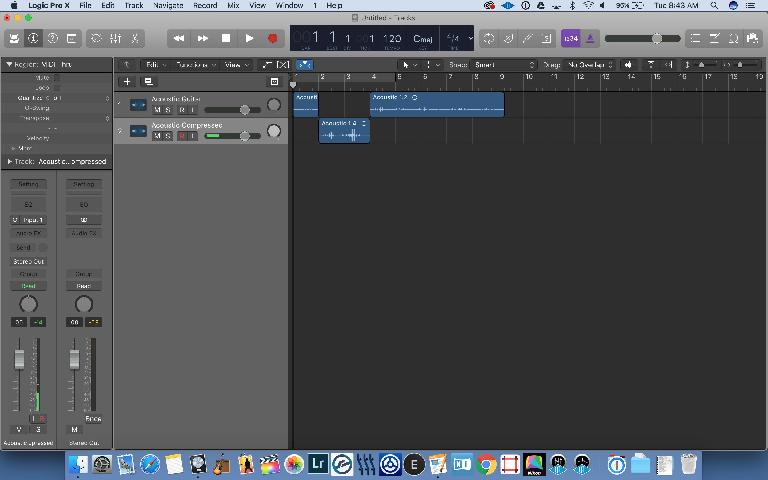 In other words, there was no way to quickly apply, say, a low shelf EQ to 2 measures of a guitar track. I’d have to either apply EQ to the entire track and automate those 2 measures (a time suck), or create a second guitar track with the EQ applied and copy those 2 measures into that track (clogging up my screen with more tracks than I need). In Pro Tools, I could always just select those 2 measures, and apply any effect I wanted to them. Enter Logic 10.3.1, and that’s available in Logic for the first time.

Before using selection based processing, you’re going to want to separate the bit that you want to process. Use the scissor tool, or simply move the playhead and utilize ‘command-T’ to split the audio from the rest of the track. You haven’t done anything audible yet, just isolated the measure(s) that you would like to adjust. In this example, I’ve blocked off 2 measures of an acoustic guitar part that I want to work with. 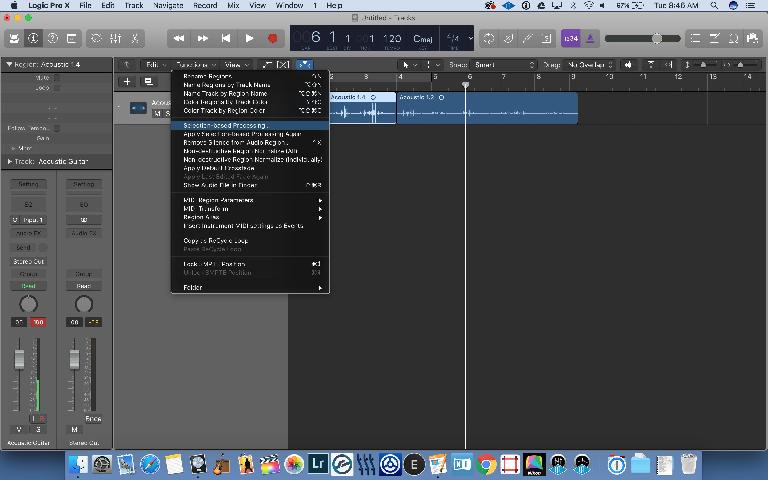 Now that you’ve got it sectioned off, select the bit you want to process, go to the ‘functions’ menu and choose ‘selection based processing’. This will open up the SBP window and allow you to decide which plug-in(s) you want to use. You can use channel strips, open up several plug-ins, and even create your own commonly used chains of plug-ins. 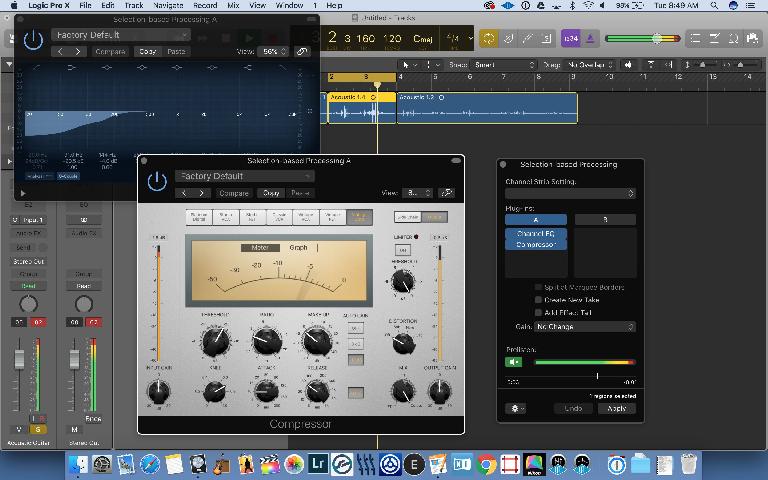 Once you have your plug-ins chosen, utilize the ‘prelisten’ function. You can hear what your chosen plug-in chain is going to do to your audio. I tend to open up the little ‘gear’ options icon and disable the ‘cycle’ function. Although most folks want to hear their projected results, I typically want to hear how my changes fit in with the rest of the track. In this case, I want to roll off a little bass as well as tame the dynamic jump that happened when the guitarist leaned into the mic with his acoustic. I want to see if my changes smooth out the track so it’s more consistent.

If everything sounds good, go ahead and hit ‘apply’. Another incredibly convenient feature is that SBP allows you to create a new ‘take’ within the same track - you don’t lose your old audio. You can seamlessly switch back to your unprocessed 2 measures if you like. It’s the best of both worlds!