All Articles Logic Pro
How to Create Low-Fi Sounding Synths in Logic Pro
Gary Hiebner on Mon, February 11th 0 comments
Language
Reduce the bits and squeeze the hi-fidelity out of your synth sounds in Apple's Logic Pro. Gary Hiebner, reductionist and expert, shows you how.

In some of the latest electronic music productions there are synth sounds that are reminiscent of a decade gone by. In the eighties, when video games kicked off, the games had these really catchy yet simplistic theme tunes. The simplistic style was due to the limitations of the audio engines in the game consoles at the time. But now it's quite funny how producers are using their modern gear to replicate these sounds. There's even a whole genre behind it called '˜Chiptune'. I'm going to show you how to create these low-bit sounds in Logic. These vintage video games had killer theme tunes, which still bring back vivid memories of gaming. But enough of that, let's getting into chiptune sounds.

My weapons of choice are going to be the ES P and the Bitcrusher. The ES P is a very simple synth, and it has a good selection of waveforms that are similar to the waveforms used in gaming music in the '80s. I'll also be relying on the Bitcrusher to downsample the sound as these sounds were all 8-bit back in the day. On the ES P, drag all the waveforms down, and make sure the ADSR Int and Vib/Wah are set to zero. You can click on the button on the middle to reset them. Turn the Frequency all the way to the max, and you can leave the Resonance in its default position. Let's work first with the Square waveform. Bring this up to about half way, now lets jump across to the ADSR. I want the Attack to be set to 0, set the Decay and Sustain all the way up, and then tweak the Release to where you want it. I have mine at about a quarter of the way up. Now play some notes, and hear how you have something sounding very close to the game audio synth sounds of the '80s. 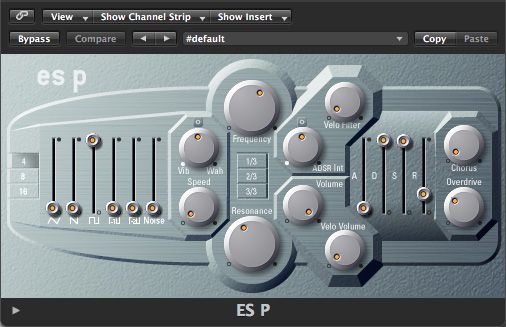 Now to degrade the sound from 16-bit to 8-bit, insert a Bitcrusher on the channelstrip and dial in the following settings:

Now choose a Mode. I have gone with the middle Mode. You can increase the Downsampling if you want the sound to degrade more, or if its too much back it off a bit. 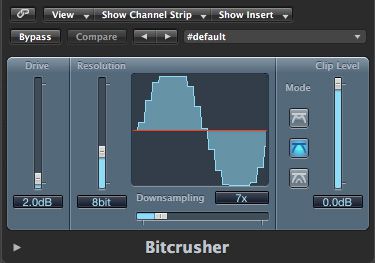 Take a listen to the synth I have programmed. Stick to playing single note patterns to stay more authentic.

Create some new instrument tracks. Copy the ES P and Bitcrusher to them and start programming in some counter harmony lines. With the ES P try different waveforms, or even more than one for that matter. Take a listen to the lines I have come up with:

The early gaming consoles were very limited on memory allocation, so the sound designers had to be very sparing on how they designed their synths. What you often found was that the bass line kept the backbone of the tracks, as there really wasn't any kick and snare sounds. What works quite well is to use staccato bass lines probably using 1/8th note patterns. On the ES P use the Square waveform and pull the Frequency back to about 60%. You can pull the Overdrive up for a dirtier sound. Adjust the release so that the notes do not play out for too long.

A way to get snares and hat sounds was to use a noise waveform. Bring up an ES P and bring up the Noise waveform. Fine-tune the Release and Overdrive till you get a sharp noise sound that you like.

Now listen and see how this Noise waveform compliments the other synth sounds.

Here is my final chiptune track:

It can really be fun limiting the synths you have at your disposal and write a chiptune track. It all comes down to the melodies and counter harmonies with the synth lines. Amazing what you can get done using only single note patterns.

But this doesn't stop you from using these low-bit synths in your modern productions. Maybe a chiptune synths against a huge Dubstep beat and Wobble bass might blend quite interestingly. Maybe that'll be the next big thing.

I hope you had some fun creating these authentic 80s sounds. To get more information on current game audio and music trends check out the following tutorials: 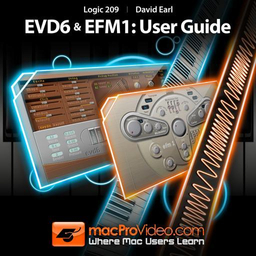