All Articles Audio Software
How To Immediately Get Started With Auto-Tune
Matt Vanacoro on Mon, August 10th 0 comments
In this short series, master musician Matt Vanacoro takes us through the basics of getting started using Auto-Tune with some helpful tips and tricks veteran producers will find useful too.

Auto-Tune has become ubiquitous with modern music production, and is used on everything from vocals that need help to synth pop instrumental hooks. In order to get the most out of Auto-Tune, you’ll need to have a bit of music theory background, and some patience. Here’s how to get started with Auto-Tune from square one.
Know the Song, Know the Key.

In order to use Auto-Tune, you’ll first have to have an idea of the song and key. Auto-Tune does what it’s told, so you need to ‘tell it’ which notes belong and which notes don’t. Antares does make a helper app called ‘auto key’ which can help with this process if you don’t have the ear or music theory skills to know by listening, but nothing (yet) can really fully substitute simply knowing the song and knowing what notes the vocalist is singing.

Think about it. Even if the song is in the key of C, are there any times where the vocalist is supposed to drift away from that key? Is there a key change? Perhaps a dominant seventh chord that forces your singer to need a Bb instead of a B? These things are all important, because if you ‘tell’ Auto-Tune that the song is in C, notes outside of that key will be ‘corrected’ even if you don’t want them to be. We’ll delve into how to circumvent that in a bit. 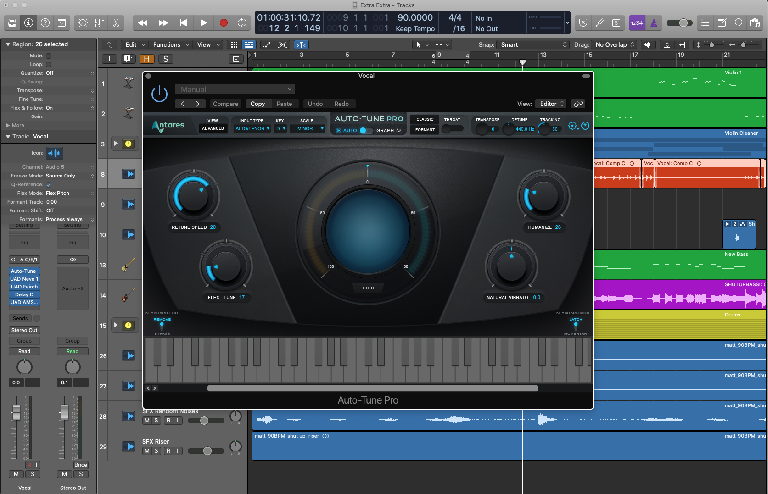 To start, find a song or create a quick project that has a vocal line that stays in one key the entire time. Load up Auto-Tune as a plugin on that track, and choose the key the vocal should be in at the top of the screen under ‘Key’ and ‘Scale’. Once you’ve done that, you’re done with the most basic part. Auto-Tune will now make sure there are no notes outside of that key. You can adjust a few controls to allow for a more human feel and avoid the ‘obvious sound’ of Auto-Tune if you like (or adjust them to the extreme if you’re seeking the obvious sound of Auto-Tune).

Retune speed deals with ‘how fast should I fix the note?’ If your vocalist does a few short slides, or you want to allow for some natural variance before the singer ‘settles into’ the pitch, set a slower retune speed. Flex Tune lets you decide how much pitch deviation there actually is. For a robotic sound, don’t allow ANY deviation. For a more natural sound, loosen the reins a bit! The Humanize feature will attempt to mop up any artifacts when Auto-Tune is making adjustments at a faster speed. Finally, the Natural Vibrato control lets you adjust how much vibrato should be allowed (as vibrato can be a bit of an obvious fluctuation in pitch).

You can switch to advanced few in the upper left corner and ‘single out’ notes on the keyboard if the scale you want isn’t represented. You can also do this if you need to account for a single accidental (if the singer is in one key, but there’s a single chord change that adds one extra note that normally doesn’t belong). I use that often if I don’t want to go into graph mode and specify pitch correction manually for a single note.

Getting Your Hands Dirty 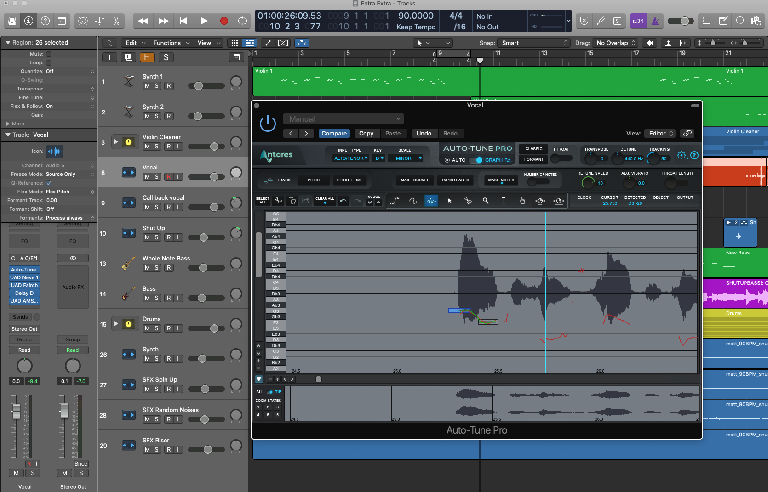 Auto mode is crucial for adding subtle correction and tightening up a track, but for more surgical operation, graph mode is key. We’ll dive into manual pitch correction next month, so check back after you’ve mastered Auto Mode and we’ll get our feet wet with manual mode!

Dream It. Do It.
Do you want to learn Auto-Tune EFX+ Video Manual?
Yes, I want to learn!
No Thanks, I just want to read the article.
Feedback
How are we doing?
We'd love your thoughts, feedback and questions regarding our new site. All feedback is appreciated!
We do not respond to this form! If you need support, please visit our support page.
Thank you for your input!
Your message has been successfully sent
Course Advisor
Don't Know Where To Start?
Ask A Course Advisor