All Articles Logic Pro
How to Record iPad Synths into Logic Pro X with Audreio
Darren Burgos on Mon, July 20th 7 comments
Language
Imagine being able to stream audio from your iPad synth directly into Logic Pro X on your Mac... with low latency. Imagine no longer! Darren Burgos shows how using Audreio as a plug-in inside Logic.

There’s a new, easy way to play live iPad instruments directly into Logic Pro and other DAWs that support Apple’s Audio Unit plug-in format. It’s called Audreio. Not only can you stream live sound from your iPad to your Mac using very low latency WiFi, but even better, you can connect a standard Lightning cable and stream at near zero latency. You open Audreio on the iPad, then launch the instrument you want to play from within it. The Audio Unit plug-in on the Mac receives the audio from the iPad allowing you to record the incoming instrument live onto a track right there in your DAW of choice.

In this article, I’ll show how to set this up with Logic Pro. We’ll first install Audreio on both the Mac and on iOS. Then, we’ll save a Library Patch in Logic as a shortcut to save you (and your sanity) from a lengthy manually setup every time! Follow the semi-complex setup below only a single time, and you’ll have created a near instant path to getting audio from your iPad into Logic with Audreio.

First download the $5 application for your iPad, then head over to their website (www.audre.io) and buy the $20 Mac Audio Unit and install it. Remember that Logic must be completely quit then restarted for it to read any new plugins installed.

I highly recommend using an actual Lightning cable directly plugged in to the Mac from your iPad. This will result in the lowest possible latency. 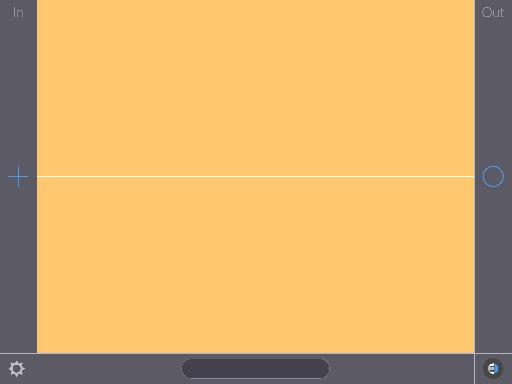 To keep things simple and less confusing, open a new EMPTY project in Logic and add a new audio track from the menu. Not a software instrument… this is all done with audio tracks. Choose not to open the Library by unchecking the “Open Library” button; this way no unnecessary effect sends are auto-created. Once the track is in the workspace, label it “Record iPad HERE” like in the image below. 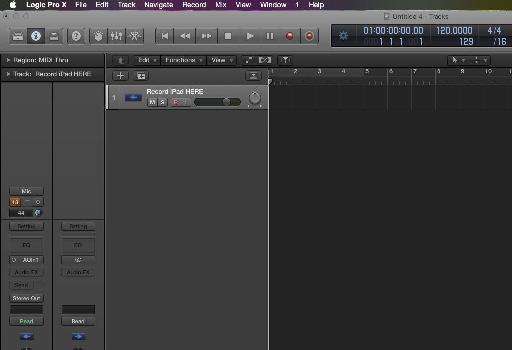 Press the X key to open the Mixer. From the mixer’s local Options menu, choose the first option “Create New Auxiliary Channel Strip.” The track will be created in the mixer. Add the Audreio Audio Unit plugin as an Audio FX to the new Aux channel. In the Audreio plugin you should see your iPad listed in the center white area. Click the Blue “Connect” button and the white area will go dark when it’s linked. The channel’s volume slider is all the way pulled down by default. For now set it to zero decibel, but later we’ll use this Aux track’s slider as a recording level control. Name the track by double clicking at the bottom and change it to “Audreio.” 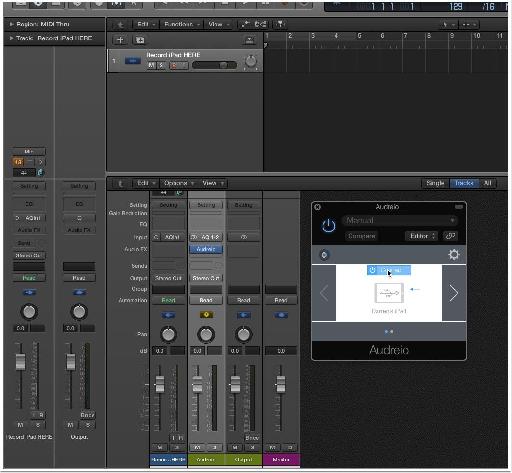 Step 6: Output the Aux Track to a Bus

Change the Aux track’s output to Bus 1 by clicking and HOLDING on its track output row in the mixer. It will currently read “St Out” or “Stereo Out.” When the menu appears, move down to the Bus menu and choose Bus 1. A new Bus will appear automatically in the Mixer. 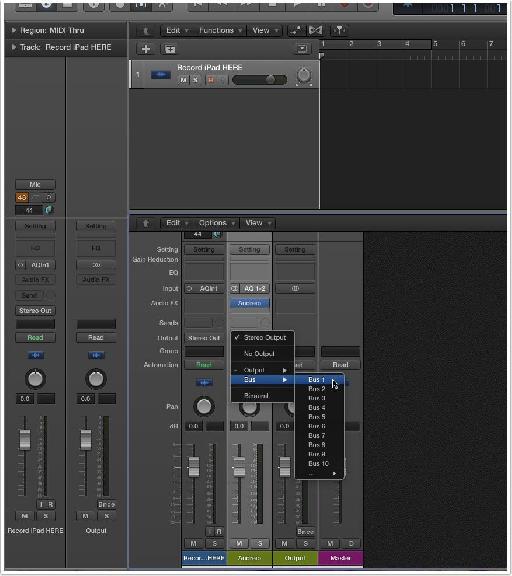 Step 7: Change the Bus’ Output to No Output

Logic can record from its own built-in sources, from third-party interfaces, and from buses. We’ll be using this Bus 1 track (created in the step above) as the Input for the Audio track you created in step 4. We don’t however want to hear it both on the Bus itself AND on the audio channel when recording. To fix this, simply change the Bus’ Output to “No Output” by clicking and holding on its Output row that currently reads Stereo Out (like you did in the previous step). Rename this channel “Bus.”

We’re almost there! Now that you’ve created the Aux track that Audreio must reside on, then output it to a Bus, then turned off that bus’ output, you’ll now simply choose Bus 1 as the input on the Audio track you created above. Still in the mixer, from the Audio track’s (the one you labeled “Record iPad HERE”) INPUT menu select “Bus 1” from the list. 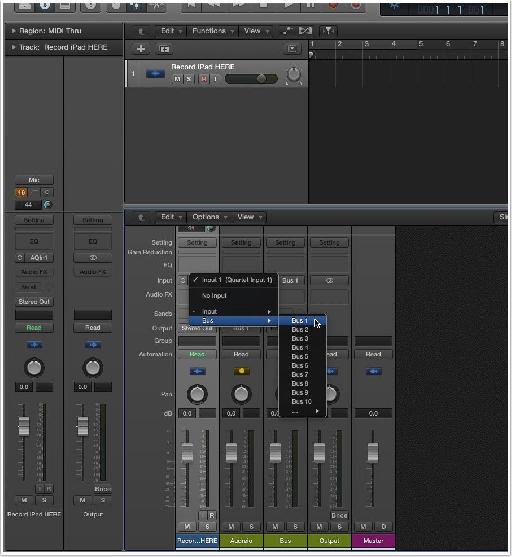 In Logic’s workspace/arrange area click either the audio track’s I or R button and start to play your instrument of choice on the iPad. This should work if you followed the instructions above, but if not, go back and check your steps carefully. Once you’ve got it working follow the next steps to save this whole crazy setup as a Library Patch. 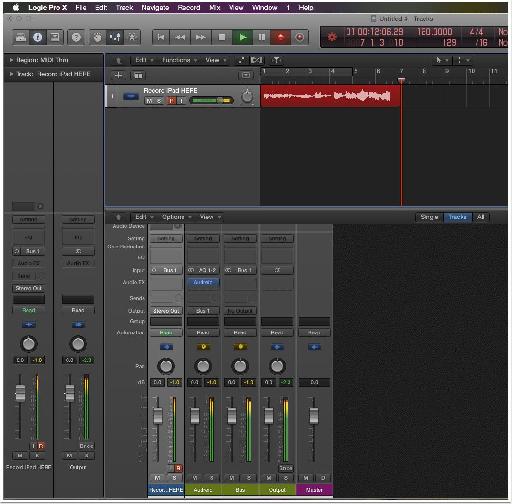 Step 10: Save as a Library Patch

Whew... you made it! All your hard work is about to pay off in this last step. Still in the Mixer, Shift-click both the Audreio Aux track, and the Bus track (you labeled them in the steps above right?). Once they’re both selected, right-click/control-click on any of the selected tracks and from the menu that appears select “Create Track.” This adds the two additional tracks to the workspace. Select all three tracks now in the workspace, then from Logic’s track menu select “Create Track Stack.” Select “Summing Stack,” then click the Create button. Now save the Track Stack itself to the Library. You do this by pressing Y to open Logic’s Library, then onto the “Save” button at the bottom of the Library. When saving, you’ll have the option to categorize and name the patch. I created a new folder I labeled as “iPad Streaming,” and I named my patch “Audreio.” That’s it! You can now recall this saved Library Patch in any song and start recording from the iPad. So, in case all else fails, I’ve included the actual Library Patch below! Simply open the archive and drag the “Audreio” patch to Logic’s Patch folder. Here’s the Path: Home Folder: Music: Audio Music Apps: Patches: Audio. Remember that the Audreio Audio Unit (purchased directly from Audreio) must be installed …this Patch does not include the plug-in! Enjoy!
Download the Patch for Logic Pro X here.
Related

Darren Burgos
Darren started making music on computers when he was a teenager in 1987. His first computer was an Amiga, and when he realized the power of computer-based production, his addiction for making electronic music began. Darren switched to Mac in 1994 and started using Logic Pro. He's been involved in many music projects over the years including Psychoid. For two years Darren travelled with Apple showing Logic Pro to visitors of Macworld, NAMM, Remix Hotel and NAB. Currently, he teaches a class in L.A. on electronic music production using Logic for Logic Pro Help. Darren also runs two small businesses on Mixing, Mastering and Logic Pro training and support.
Related Videos
Comments (7) 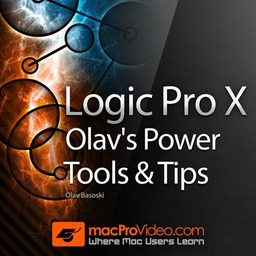 Dream It. Do It.
Do you want to learn Olav's Power Tools & Tips?
Yes, I want to learn!
No Thanks, I just want to read the article.
Feedback
How are we doing?
We'd love your thoughts, feedback and questions regarding our new site. All feedback is appreciated!
We do not respond to this form! If you need support, please visit our support page.
Thank you for your input!
Your message has been successfully sent
Course Advisor
Don't Know Where To Start?
Ask A Course Advisor