All Articles Audio Software
How To Sequence Audio Loops In Korg Gadget Without Audio Tracks
Hollin Jones on Fri, September 8th 0 comments
Gadget doesn't have audio tracks, but there's a clever workaround for slicing and sequencing audio loops anyway, and it harks back to the days of MIDI triggered hardware. Here's how it works.

Korg Gadget is an all-in-one programming studio for the Mac that takes a unique approach to helping you make music. With its own dedicated instruments and processors and a clever 4-way split interface, it's both fun and powerful to use. In this short video from the course Gadget 201: Make Dance Music With Gadget, Nigel Broad gets into how to use Gadget's slicing and looping tools when you're working with MIDI and sampled audio.

Using the example of building a drum'n'bass track, Nigel demonstrates how even though Gadget doesn't directly support audio tracks, you can use clever techniques to import sampled loops into Gadgets and then trigger them using MIDI to achieve sequenced loops, just like people used to do in the early days of hardware sampling! You'll also see how to select slices within loops to get even more creative with audio files. Check out the rest of the course to learn more about making dance music in Gadget.

With more than 30 synths and drum machines to choose from, Korg’s Gadget offers electronic musicians a fun and creative music production environment. In this course, veteran producer Nigel Broad delves deep into this “second DAW”, and explains how to go beyond its limitations.

Beginning with a tour of Gadget’s interface, Nigel explores all the basics: sorting and selecting gadgets, zooming, setting the tempo, assigning MIDI CC, saving projects, etc. Next, he builds the foundation of a track by tweaking and layering kick drums and adding other elements to create a full pattern. From there, he explains how to enhance your beat with an external drum loop, and how to make it follow the tempo of your project.

Watch as Nigel moves on to the bass, creating Drum 'n' Bass and EDM basslines using Dublin (a cool Monophonic Semi-Modular synth) and Madrid (a dynamic acoustic and electric bass machine). Nigel explains how to go beyond Gadget’s trademark sounds by tweaking the presets and making them your own, and by recording and import external audio using Zurich. Along the way, you also discover the processing options available in Gadget (from sidechain compression, to EQ and delay), and you learn lots of useful arrangement and production tips too!

So if you want to learn how to produce any kind of dance music using Korg’s Gadget, this course by trainer and producer Nigel Broad will take you there! 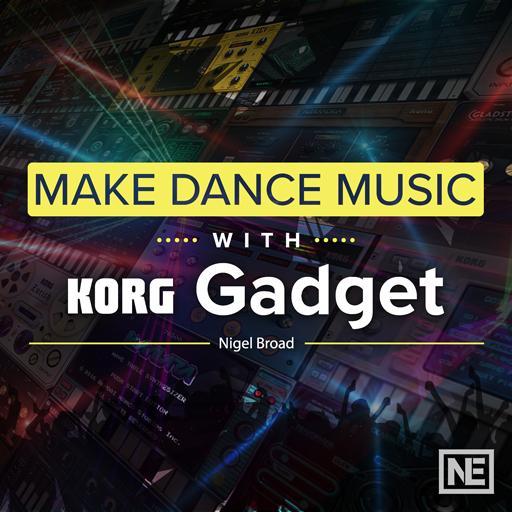 Dream It. Do It.
Do you want to learn Make Dance Music with Gadget?
Yes, I want to learn!
No Thanks, I just want to read the article.
Feedback
How are we doing?
We'd love your thoughts, feedback and questions regarding our new site. All feedback is appreciated!
We do not respond to this form! If you need support, please visit our support page.
Thank you for your input!
Your message has been successfully sent
Course Advisor
Don't Know Where To Start?
Ask A Course Advisor