All Articles Logic Pro
Logic Pro Quantization Tips, Part 2
Toby Pitman on Mon, June 20th 1 comments
Language
In the second part of this walk-through of Logic's Advanced Quantization features we're going to have a look at probably the most useful and powerful feature

In the second part of this walk-through of Logic's Advanced Quantization features we're going to have a look at probably the most useful and powerful feature for creating more natural sounding quantizations. Quantize Strength.

So, I've recorded a bit of piano but it's a bit out of time. It's dreadful actually(!), so I'm going to have to correct it. 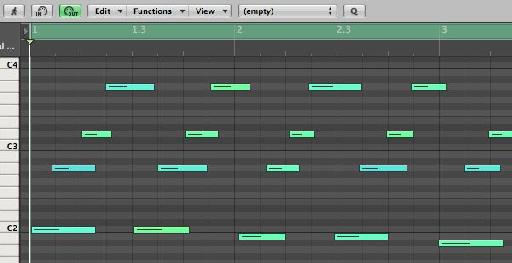 Now as a musician I'd probably do the honorable thing and play it again till I got a good performance but sometimes with a deadline hanging above my head quantizing is just quicker.

One thing I never do is quantize to grids. Instead I use Quantize Strength to pull the notes closer to the grid. This retains at least an inkling of my performance and it doesn't feel like the music was played by a robot!

To use this feature you need to apply it to a Region (it can't be done inside the Piano Roll). You do this by selecting the offending region and choosing a base Quantize value from the drop-down menu. Since all my notes have (roughly) an 8th-note value I'll choose '1/8-Note'.

Power Down the Tractor Beam!

Upon doing this your notes will be rigidly quantized. Go to the Advanced Quantization in the Region Parameters box and click on the disclosure triangle to reveal the hidden parameters.

Here you will see the 'Q-Strength' (short for Quantize Strength) option. At the moment it's at its default of 100%. I'm going to drop it to 80%.

Now all my notes have been pulled 80% of the way between their original position and the absolute 1/8-note grid position I set. Quantize Strength has a kind of gravitational effect on note events.
The distance they travel is relative to how out of time they were. The most important thing is they never reach that absolute value and what you're essentially hearing is (at least) 20% of my original performance.
You can see the effect of this in the image below. 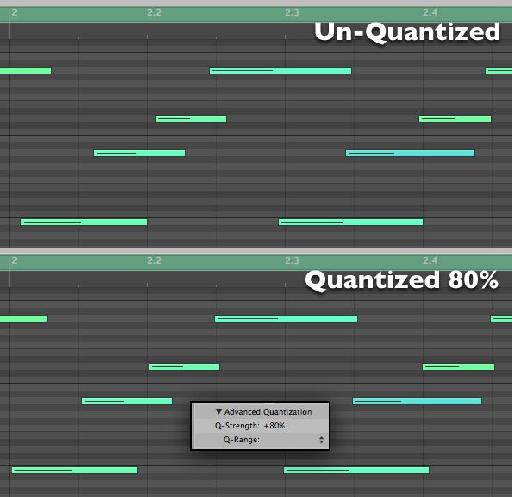 Here's the Piano with a Q-Strength of 80%:
If you have to quantize then this is the most natural way to do it. Use your ear to decide how much percentage is enough. If it sounds OK with just 50% then use 50%!

It's Not Just for MIDI!

Quantize Strength is also available as an option when using Flex Time with audio. This means you can naturally tighten up a performance just a bit without sucking all the life out of it.

Don't forget that Q-Strength is a global setting:  it affects all the MIDI notes inside the selected region. Next time well look at how we can be a bit more selective in what we actually quantize.

Learn more about Quantizing in Logic in Logic 201 - Logic Masterclass