For a lot of users, building a complex arpeggiator in previous versions of Logic seemed to require a computer science degree. That’s because to create something musically useful, it required a lot of work and programming using all kinds of different Environment objects including Transformers, Arpeggiators, Delays, Monitors, Switches and Faders. Then you had to program them each individually, wire them together, troubleshoot them, pack them into a Macro and then insert that Macro properly into the “jacked” signal path. It took a lot of work to get it right! This is what an unpacked complex and musically expressive Environment arpeggiator patch might look like:

Remember this? The old, complex way to setup a useable Arpeggiator in Logic 9.

Enter Logic Pro X and its suite of MIDI FX plug-ins. Now, to create an arpeggiator that’s even more powerful than anything you could do in the Environment, you simply insert the new Arpeggiator plug-in in one of new MIDI FX insert slots in the redesigned Instrument channel strip. See the difference?

Don't be fooled by the clean layout and lack of cables! Logic Pro X's Arpeggiator MIDI FX does more than you could create yourself in the Environment...

That’s how easy it is. Simply put, to create an amazing, expressive, even complex arpeggiator with crescendos, randomness, complex patterns and external controls you just have to insert the new Arpeggiator MIDI plug-in.

And that’s just the Arpeggiator! There are 8 other FX included in this version of Logic X, and in a nod to us geeks out there, one of them is the JavaScript-based Scripter plug-in that lets you roll your own MIDI FX!

Here’s the coolest fact of all: The transport doesn’t need to be running for these FX to function. So, even time-based FX like the Arpeggiator and the MIDI Delay line work when the playhead is perfectly still! Think about it. This has all kinds of implications –especially for sound designers and live performers– who need to trigger vast worlds of MIDI madness with just a single touch of a key! It’s truly extraordinary.

A closer Look: The Arpeggiator

The mothership of the MIDI FX plug-ins is the Arpeggiator. This robust plug-in is so feature packed that I created a whole course to explain it. Sure, it arpeggiates the notes in the typical patterns like up, down, and up/down. It also has a setting called Outside/In and my favorite: Random. Even those are to be expected. However, Arpeggiator dives much deeper.

Every “Note Order” algorithm has 4 sets of Variations and Octave ranges that interact in all kinds of musical and inspiring ways. It also comes with a 128 stage pattern generator that –like the similarly designed, velocity bar programmable step sequence in Ultrabeat– lets you build any kind of pattern you can imagine. But that’s just the beginning...

The Arpeggiator allows you to build virtually any kind of pattern you can imagine.

You can also program Arpeggiator’s Option Controls to get extreme (or extremely subtle humanized) random note lengths and velocities. And, if you prefer, you can set up awesomely expressive crescendos/decrescendos that swirl and swell in perfect time with the track. If that isn’t enough, these options (and others) can be controlled via an external controller and it’s all built into the Arpeggiator itself. And, please excuse me for repeating myself, but it does all of this without the confines of running Logic’s transport!

Then there’s the Keyboard split area with a Remote section that enables you to map any keys on your controller to all of the Arpeggiator’s main functions! You can divide the keyboard into 3 customizable splits so that one section is for the arpeggiated chords, the other for Remote Control and the 3rd on for playing leads! (Geez... I’m going to have to get another arm). This truly makes the Arpeggiator a live performance, manic machine great for DJs, EDM producers and sound designers alike. Here’s a look at the Remote control options:

Remote control? You read that right! You can now easily control the Arpeggiator's functions with your MIDI keyboard.

When you combine the Arpeggiator with the other MIDI plug-ins and build a Track Stack with other MIDI effected Instruments channel strips, you can get Logic to perform entire musical compositions with just a simple tap of a MIDI controller or with the Logic Remote iPad app. This is big-time stuff. Imagine the possibilities. Actually, you don’t have to because I created a very quick couple of Track Stacks for you!

The first one is called Subotnick Dreams. It’s a Track Stack that combines the EFM1 and other Logic synths with some MIDI FX to recreate the the vibe of the Buchla modular synthesis sounds of the late 70s, made famous by Morton Subotnick.

The second one, Pacific Fantasy, puts a world ensemble into a Track Stack, stocked-up with Delays and Arpeggiator plug-ins so that with one quick tap of a finger on G2 Logic will play a pseudo ethnic track all night long!

You know, the more time I spend with Logic’s MIDI FX plug-ins, the more I see the limitless possibilities. If only I had more time!

If you want to dive in deeper to the new Arpegiator, check out my

See you next time!

Steve H
"Twice Emmy-nominated Steve Horelick is a Logic Pro Master and industry-leading audio producer. You might know him from TV's "Reading Rainbow" ... he scored every episode of that program."
Related Videos
Comments (1) 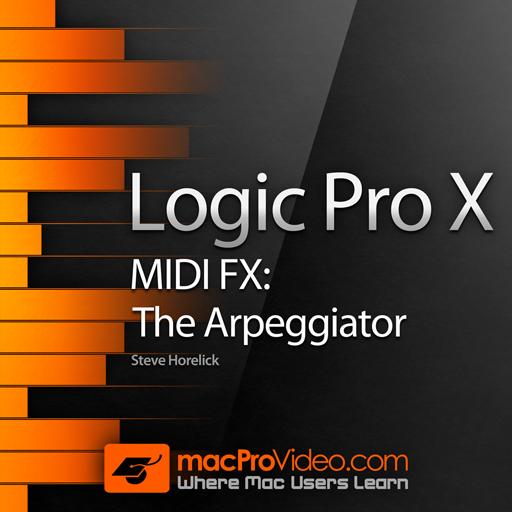