So now that you've read part one of this guide on creating Mashups in Logic Pro, and prepared the files you'll be using. Let's actually build a real mashup. We'll work through editing, chopping and arranging sections, adding EQ, effects, automating, and doing a simple master before bouncing. Read on!

Start by lowering the volume of each track by several decibels if you haven't already. This is another important step since the combination of the two tracks will cause the master output 1/2 track to clip otherwise. Play the songs together! Listen closely to hear any 'happy accidents' that work well. Don't be surprised if you find plenty of them! Mark sections by cutting them out together. Use the Marquee tool to first highlight the area(s) then use Control-Command-T cut. 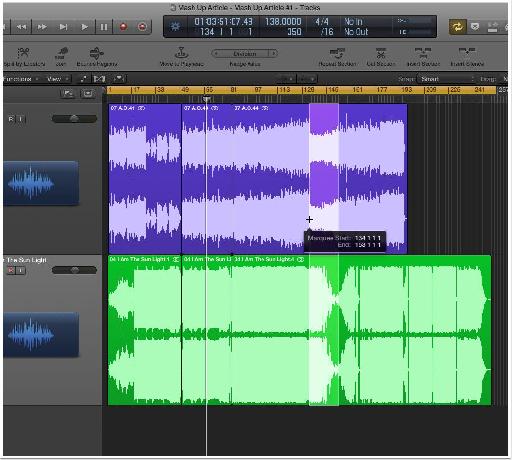 Double-click the the EQ square at the top of each track to add an EQ. Enable both the Highpass/Low Cut and Lowpass/High Cut filters by clicking them. While playing the songs together try our different EQ settings. For example push out all the lows from one track and all the highs from the other. Do this to just get an idea of how the tracks you've chosen will sound together. In Step 5 we'll be creating EQ automations. If you have any available MIDI sliders or knobs on any of your controllers, use them to control these filters'¦ it's a blast, and will make you feel like a DJ! Control-L to 'learn' the filters to your MIDI controllers. Click on the frequency parameters to select them, then tweak a controller you want to assign to it. 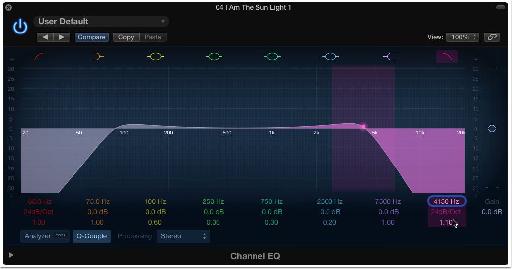 Determine the various blocked sections of the songs you're using and cut them with the Scissors tool, or by using Command-T. Wether they're traditional verse/chorus sections from tracks with vocals, or build/drop sections from dance and electronic tracks, this will make it easier to decide on how you want to arrange the mashup. Start trying out different combinations. Don't be scared here'¦ remember that every cut region can be expanded back out by simply pulling on the bottom left or right corners. The default Snap setting is set to 'Smart.' When you're zoomed pretty far out, the regions you're dragging around should automatically 'snap' to a bar position. Do not change Logic from this default setting or all you're hard work from step 5 in part 1 of this series will be a waste. 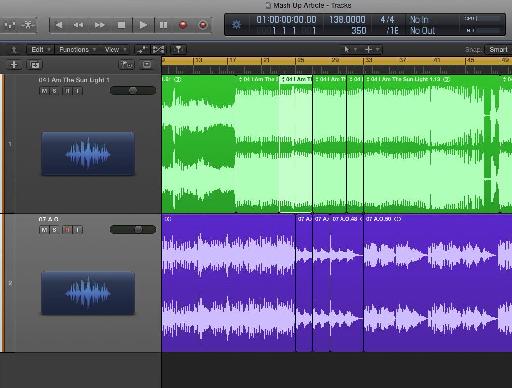 Don't underestimate the power of levels. Varying each track's volume throughout will have a huge impact on the energy level of the mashup. Play the two tracks together and watch the Output track. Lower or raise each track's volumes until you're a couple of decibels below zero. Once you've set the initial volumes, press the A key to toggle Automation view, and start to create volume slopes by drawing them in by hand. In my example mashup below, I lowered the volume of the Trance song when the verse vocal sections play from the other song, but really pushed the volume after the build-ups to punch up the energy. Keep a close eye on the master volume. If it clips occasionally don't worry, we'll be applying a limiter as the last step before bouncing. 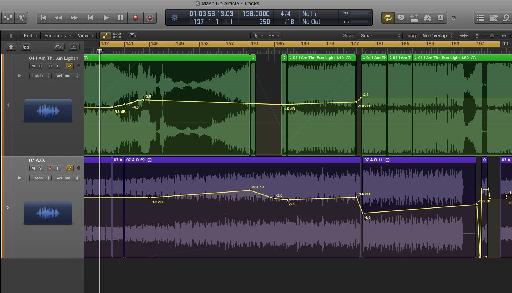 Now let's start to automate the various highpass and lowpass filters we applied in step 2. Open the EQ on each track and press Control-Command-A to enable automation Touch/Latch. Make sure automation is visible (A key) and press play (Space bar), then single click the frequency parameters for each, so their current value will be written as automation. Press Control-Command-A once again to toggle it back to read. Create different slopes that will filter out lows, or highs on various sections of you're mashup by drawing them in by hand or with the pencil tool. If you assigned a MIDI controller in step 2, then record the movements. 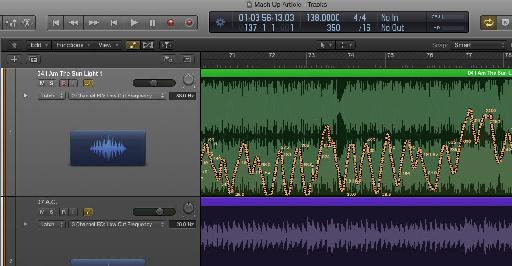 In my example track below, I blasted in a reverb at different points and on different vocal/synth parts from the songs. Simply add a bus to an available send on each track, then add various effects like reverb, delay, distortions and more. Experiment on how it'll sound by adjusting the send knob rhythmically while playing the song (to the right of the send). When you've found an area you want to process, automate it!

Step 7 - Create Cuts at the End of Sections

A cool thing to do wether you're creating a mashup or not, is to 'punch holes' into your mix to break it up. Wether it's a full measure, or one or two beats, placing these at the ends of sections will make the parts drop even harder. Use Logic's Marquee tool to easily select an area to remove, then press the Delete key. 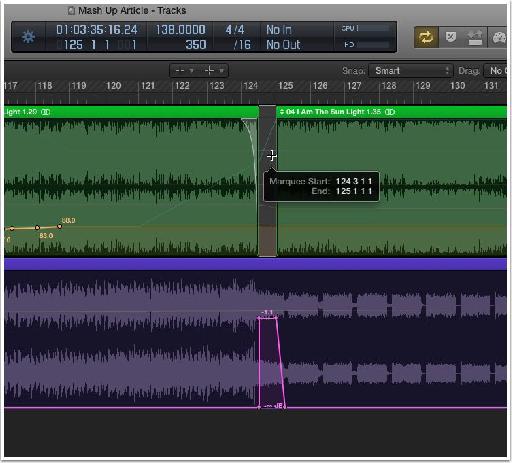 In my example mashup, I took a synth effect that played without a beat and cut it from the song to use under the second track at the end. Sections without beats are like little chunks of gold when doing a mashup. However, if you can't find a section without a beat, chop short sections and create repeats and stutters. These sound great when filtering them with EQ (Step 5 above). Step 9 - Add your own Synth and FX Sounds

The title above says it all! Don't just stop at rearranging, effecting, and altering the existing elements in the tracks'¦ you're in Logic remember. Without getting too carried away, add simple synth parts, risers, crashes and more. I might mention at this point as a reminder that this is by no means your track. Although making mashups are a creative and fun thing to do, pay respect to the song's artists and credit them wherever and whenever you post the mashup. Without exception, you should not be selling your mashups to anyone or accepting any kind of profit from them. Who knows though, the weirdness you come up with may inspire a whole new genre of music! Or at least get people thinking outside of their norms. 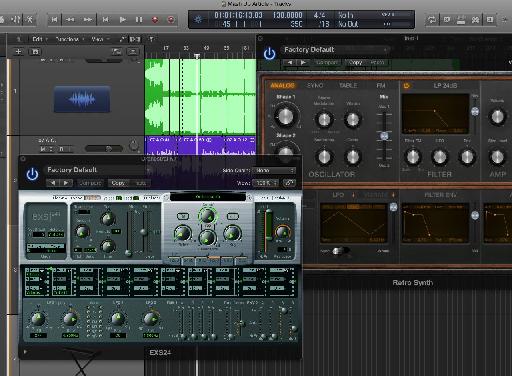 Step 10 - Apply a Limiter and Bounce

OK, so now that you've built a great sounding mashup, how do you get the volume to equal what it did before all of this? If you've been watching you're master output 1/2 track (the way you should have been!) you've been making sure that the combination of the two (or more) tracks haven't clipped. Let's do a simple mastering to the mashup to assure it can compete with other louder tracks. On the master output 1/2 track, place Logic's Adaptive Limiter. Pull the Output Ceiling down slightly to 0.1dB, then adjust the Gain parameter to taste. Try not to push it too hard'¦ remember, these tracks have already been mastered'¦ you're just looking to level them out a bit and regain some of the volume they've lost. 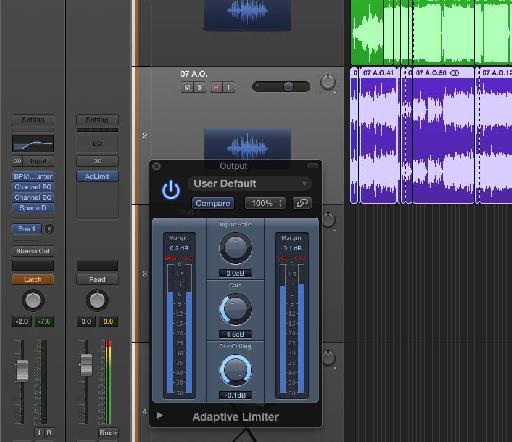 That's it! Thank-you for reading this two part article, hope you enjoyed it! Check out the sample mashup I made while writing this article.

I used 'A.O.' by The Presets (From Pacifica on Modular Recordings), and 'I Am the Sun Light' by Zyce & Aquafeel (from the Forensic Science Vol. 2 Compilation on Iono Music).