All Articles Native Instruments
Massive's Performer And Stepper LFOs
Mo Volans on Mon, March 5th 0 comments
Language
NI's Massive is, for fear of stating the obvious, a HUGE synth! In this article, Mo Volans explores how to get the best out of its unique Performer and Stepper LFOs.

Everyone's bored of normal LFOs now, they're simply not cool enough. So we need something different. 'But what?', I hear you asking. Massive has the answer in its unique Performer and Stepper LFOs. Let's take a peak at these bad boys right now...

For those of you not familiar with Massive's awesome modulation system it consists of four envelopes and four LFO slots. The LFO slots are extremely flexible as each one of them can be switched between either a standard LFO, a '˜Performer' or a '˜Stepper'.

Once you have your LFO in place mapping it to just about any parameter is as simple as dragging and dropping the small crosshair icon to the destination of your choice. You can then dial in a positive or negative amount of modulation to apply your mod source. 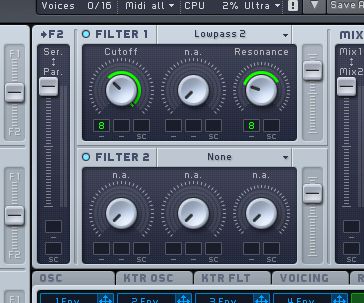 Mapping modulations is simple in Massive

In this case I've started with a nice simple unmodulated sound so that you can hear the effects of the two LFO types very clearly. There is no modulation applied here at all and I'm only using a single oscillator to keep things simple. 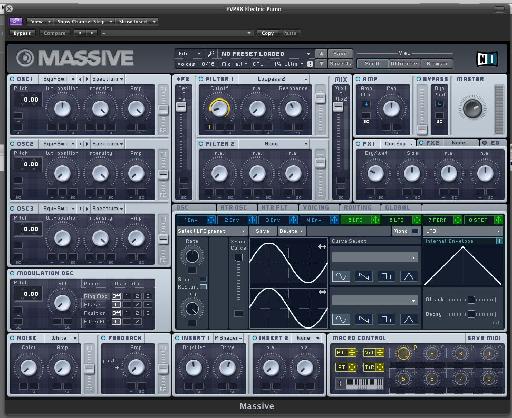 The unmodulated patch we'll be messing with!

The unmodulated patch we'll be messing with!

Obviously you can use standard LFOs in any of Massive's four slots but you can also use its more unusual modulators: the first one we'll look at is the Performer. This is actually an LFO of sorts that can be customized and runs almost like a step sequencer.

The Performer in all its glory.

Each step can consist of a wave shape from the included library, which can be further edited by changing its level. Some pretty crazy patterns can be generated using this system and of course you can save the results.

The wobbly performer in action:

There are actually two lanes of patterns running in parallel and these can be mixed to create further variation and general coolness. Of course the ultimate goal here is to create your own sequences but there are a few presets to get you going if you feel you need a head start. 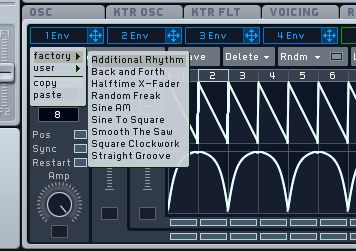 A few patches to get you going.

If you want the whole sequence to run with a MIDI pattern made up of short notes (like I've used here) you might want to uncheck the Restart function; this will allow the pattern to run freely. And remember to hit sync and use the resolution that best matches the musical pattern you are using.

A more intense sequence is created.

The Stepper is a similar sort of modulator but as its name suggests is much closer to a traditional step sequencer. The steps are simply values as opposed to the Performer's waveforms and it creates much more predictable results. It's still super cool though, so don't worry. 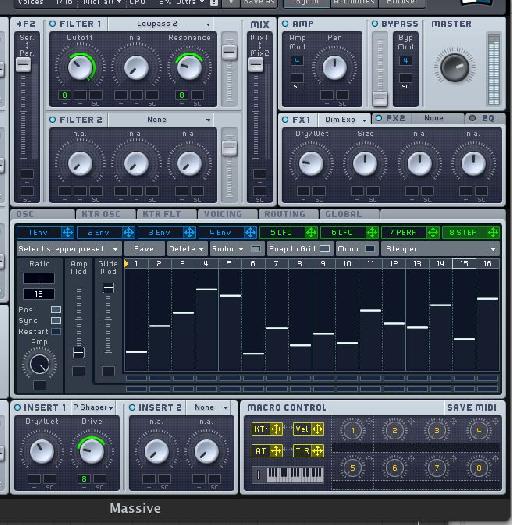 The Stepper gets its groove on.

The steps can be of any resolution and any amount of them can be activated by using the slider system at the top of the scale. The whole thing will then play back in order and some great random sample and hold effects can be generated.

My Stepper patch effecting 3 or 4 parameters:

In my example I mapped the Stepper to a distortion effect, the resonance and cutoff of my filter and then I added some delay. But remember: these modulators can be attached to any parameter in Massive... So get experimenting and join the party.