All Articles Guitar
Mixing Tips: How to Improve Your DI Acoustic Guitar Recordings
Joe Albano on Wed, May 6th 0 comments
Language
Sometimes recording acoustic guitars and finding that sweet spot can be tricky. Joe Albano explains how to improve the quality of your recordings depending on the pickups used in the mix.

Everybody knows that the best way to capture the sound of the acoustic guitar is by placing a high-quality mic (or two) about a foot in front of the instrument, finding the sweet spot, and hitting record. But that's not always an option, and'"for a variety of reasons'"when you sit down to mix, you may find yourself confronting an acoustic guitar track with a less-than-stellar sound quality.

One common cause is a DI'd recording'"the use of an on-board pickup to record, instead of a mic. This might be done in a variety of situations. It could be a live recording, in front of a loud band, where a mic would have picked up too much leakage to be usable, or a rehearsal performance, where the playing captured something special, and was used as a keeper. Whatever the reason, you're left with a recording that lacks the richness and air that an acoustic guitar track should have, and you need to massage that dry, direct signal into something that will do justice to the instrument. Fortunately, there are a number of things you can do'"some tweaks may be more effective than others, and the level of effectiveness may range from slight to dramatic improvement, but the result will always be better than just using the DI'd signal as is.

There are lots of different types of acoustic guitar pickups in use nowadays, from simple add-ons to multi-element built-in systems with electronics, and sound quality varies considerably.

One of the simplest options is a basic magnetic pickup, like the kind used on electric guitars, but voiced for a more full-range response. These can be mounted in the sound hole of most acoustics, without any alterations to the instruments, and are cheap and popular. But despite being designed to have a wider frequency response than electric guitar pickups, thanks to the technology involved, they still tend to have a more limited bandwidth than a mic, with a pronounced midrange emphasis. 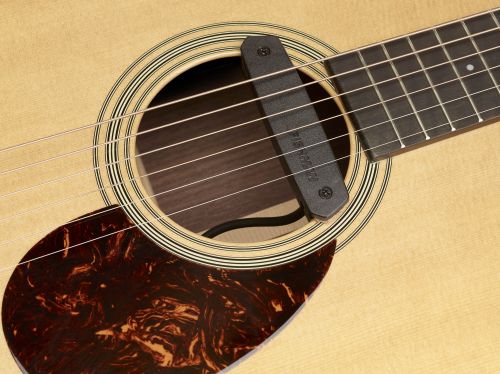 The most widely-used pickup type is probably the piezo pickup. This is a pressure-based design that's mounted under the bridge, and responds to vibrations. Piezos tend to have a very bright sound, and this makes them popular for live use, where the extra brightness can help the guitar cut through, but that same brightness lends a sometimes-unpleasant peakiness to a recording'"the sound emphasizes string vibrations, but lacks body resonance. Piezos also tend to emphasize picking transients, and this combination of characteristics is referred to as the piezo 'quack', describing the overly-bright string-heavy sound and over-emphasized attack. 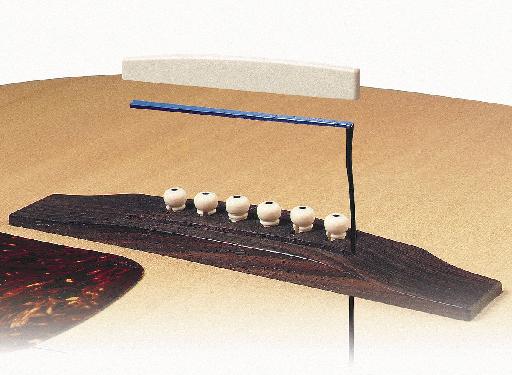 Audio Example 2'"A guitar recording with a piezo pickup (actually a piezo combined with a body pickup, as well):

A third pickup type'"less common, but still often used'"is a contact pickup, which mounts on the body of the guitar. This design can provide a sound richer in body resonance, but often lacking in clarity and high-end.

The most popular choices are piezos and mags, but many on-board systems combine elements. It's common to find an acoustic guitar with a piezo in the bridge (for brightness and clarity), combined with a contact pickup (or even a mini-mic mounted inside the body) for warmth and resonance (Audio clip #2 was from such a combo system, though you can still clearly hear a little piezo 'quack').

Though the sound of these pickups varies, from the mag's midrangy thickness to the piezo's infamous bright '˜quack', the approach to improving the sound of any of them involves the same three elements'"EQ, compression, and resonance.

The most obvious aspect of any DI'd acoustic guitar recording is the tonal difference from what a good mic would have provided. Naturally, EQ is the answer, though the specific curves you'll need to dial up will depend on the type of pickup/system in use.

If a mag PU was used, the resulting recording will usually have a broad, pronounced midrange peak which will have to be tamed, and a lack of highs, which will have to be added. The starting point would be a broad cut, centered between around 500'"600 Hz and 2'"3 kHz, combined with a boost around 8'"12 kHz, and low-end adjusted to taste. The exact settings will be completely dependent on the particular PU's response, and the sound you're going for (bright & thin, full & woody, etc).

With a Piezo PU, the over-bright 'quack' will often be centered around 3'"4 kHz, and a sharp cut in that range will be a good starting point, with additional low- and high-end tweaks for balance. 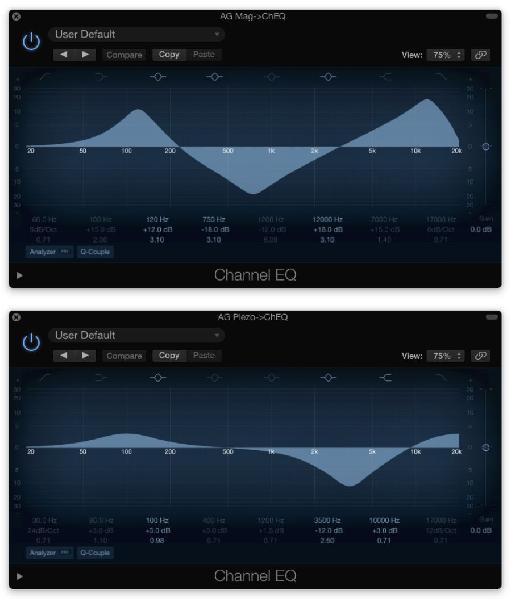 While you can do wonders just EQing by ear (assuming you have a good sense of what a proper acoustic guitar recording should sound like), there's a more hi-tech way to go, if you have the tools available. Specialty EQs called 'Matching' EQs are available from a number of companies (iZotope, Voxengo, FabFilter), and may even come with some DAWs (Logic). A Matching EQ will analyze the frequency response of two recordings (mic and PU), and automatically create an EQ curve to match the tone of one to the other. This would be especially useful if you have a properly miked-up recording of the same guitar, but any miked-up acoustic guitar track can be used as the reference. Most Matching EQs will create a curve with a greater number of bands than a typical EQ, more precisely capturing characteristic acoustic guitar resonances. In Audio Example 4, I used Logic's Match EQ to impart the tonal balance from a miked-up take (of the same part) to a take recorded with a mag PU (which had been designated a keeper for some reason long forgotten).

Part of the dreaded Piezo 'quack' can be an over-emphasized attack. Often a little compression (in combination with EQ, as above) can help to tame this particular quality, over and above any compression you might decode to add later, as part of the mix. I'd set it to mostly catch the sharpest attacks, if possible, but a few dB of overall gain reduction will probably help, in any case.

One of the main things lacking with DI'd acoustic guitars is the rich resonance of the body. Both mag and Piezo PUs tend to capture more of the string sound, and even even combing a Piezo with a contact (or internal) body mic doesn't really capture the open, airy quality that a typical miked-up recording has (even at the standard distance of around a foot). Of course, you'll likely be adding general-purpose reverb and ambience in the mix, and this will help considerably, but there's another option available these days, thanks to convolution processors.

Convolution reverbs capture, via sampling, the response of a real acoustic space, and impose that on signals running through them, making the audio sound like it's in that specific space. These samples of real spaces are called IRs (Impulse Responses), and while we typically think of them when it comes to rooms, convolution can capture the sound of anything (they're commonly used to provide the distinctly colored tonality of guitar amp cabinets), and that includes the characteristic resonance of an acoustic guitar body. To add a little richness to the string-heavy sound of a DI'd acoustic guitar recording, you could run it through a convolution reverb with an IR of an acoustic guitar body, imparting that extra woodiness to the otherwise overly-dry PU sound. Many convolution reverb plug-ins include a way for you to make your own IR (hold a mic up to the sound hole and generate a transient pop to stimulate the guitar body's response), or you could hunt up suitable IRs on the internet'"there are many free IRs floating around, they're just normal audio files.

There are also commercial solutions for DI'd acoustic guitar issues. Quite a few companies make DI boxes specifically for acoustic guitar that include features to ameliorate the usual flaws of mag and Piezo pickups. One of the best-sounding of these comes from Fishman (a well-respected maker of AG pickups)'"the Aura system. This combination DI-processor included what Fishman calls 'images''"tone-prints of the sound (the characteristic resonance) of various types of acoustic guitars (dreadnaught, jumbo, parlor, etc), combined with the characteristics of various high-end mics. You simply match your mag- or Piezo-equipped guitar's body type to images of that same type, and what comes out is the sound of the guitar as it would be had it been miked up, with the appropriate tonal balance, body, and air (you can hear examples of this system at http://www.fishman.com/videos/fishman-videos).

If you're already stuck with an already-recorded DI'd acoustic guitar, Universal Audio has a plug-in that lets you dial in missing body resonance, and microphone tone & air, after the fact, courtesy of their new Sound Machine Wood Works plug-in. This also offers you choices of various acoustic guitar body types, along with the ability to balance simulated neck & body mics'"you can hear examples (comparing the original DI'd signal to the processed version) at http://www.uaudio.com/store/guitar-bass/sound-machine-wood-works.html.

Products like the Fishman Aura system and the UAD Wood Works plug-in probably use techniques similar to the ones I outlined above, as well as more sophisticated processing like modeling, to achieve the rich, full sound they can provide from a typical DI'd acoustic guitar track. But even if you only have the basic tools available in your DAW, you can still turn that dry, lifeless DI into a reasonably good-sounding track, with a little creative massaging, and a careful ear'"of course, if you have the option, the best bet is still to record with a mic in the first place!