All Articles News
NLE Releases PreSonus Studio One 4 - Mixing And Automation
Hollin Jones on Sat, February 2nd 0 comments
Learn how to mix your tracks as well as automating levels, effects and much more in this comprehensive course on Presonus Studio One 4.

PreSonus Studio One is a fully-featured DAW that includes all the tools you need to create a pro-sounding mix. But where to begin? Join mixing engineer and educator Joshua Carney in this course to learn the art and science of mixing with Studio One 4. It's the perfect way to sharpen up your Studio One skills.

Studio One 4 104: Mixing And Automation

Josh begins by showing you how to build a rough mix, which is what you'll be working with as you compose and edit your tracks. He then explains how effects inserts and chains work in Studio One, as well as giving you a tour of the DAW's EQ and dynamics processors. Then it's on to a detailed breakdown of how to mix drums, which he deals with in individual stages based on drum type.

Mixing guitar, bass and keys is next, followed by a comprehensive section on vocal production including how to use pitch and tuning correction. Automation of tracks and effects is covered in detail before finally exploring the mixdown and export process. At the end of this course you'll be a mixing and automation master, so check it out today! 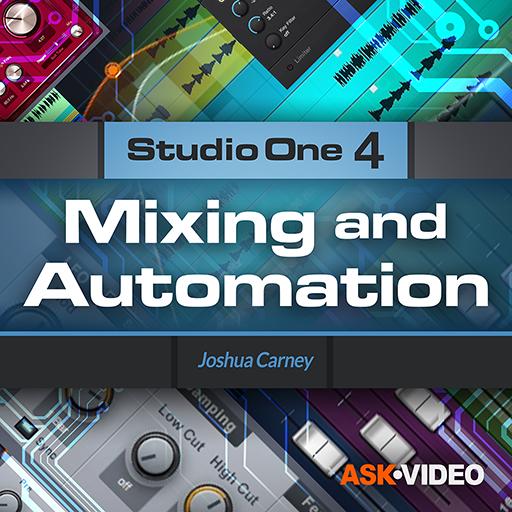 Dream It. Do It.
Do you want to learn Mixing and Automation?
Yes, I want to learn!
No Thanks, I just want to read the article.
Feedback
How are we doing?
We'd love your thoughts, feedback and questions regarding our new site. All feedback is appreciated!
We do not respond to this form! If you need support, please visit our support page.
Thank you for your input!
Your message has been successfully sent
Course Advisor
Don't Know Where To Start?
Ask A Course Advisor