All Articles iPad
On Becoming an iMusician
Matt Vanacoro on Wed, December 25th 0 comments
Language
If you're a musician with an iPad, you've probably discovered a multitude of cute synths & recorder apps. But, the iPad can be a more flexible and dynamic friend for musicians than you might think.

The iPad has transformed the way we think of computers. Now it's time to take a look at how we, as musicians, can leverage this tool into enhancing our work and productivity. With a veritable sea of apps out there to choose from, it can be hard to find those golden few that can truly reconstruct your workflow and make you into a gigging musical powerhouse. There are many resources that focus on sound generating apps which turn the iPad into a fun instrument, but let's focus on a different class of software. Let's take a look at apps for the iPad that will make it your new professional musician's companion.

The iPad as Librarian

Scanned sheet music files are small in size. I mean, REALLY small. This is great news, because that means that the iPad can hold a LOT of them. It's incredibly easy to convert your charts into a format readable by both the iPad and a computer. If you have a physical chart someone has handed you that you want digitized for the iPad, it can be as simple as taking a picture with the camera on your iPad or iPhone. One of the best tools for this purpose is an app called Scanner Pro. I love Scanner Pro because it does an awesome job of '˜cleaning up' a picture from the built-in camera.

After taking the photo in Scanner Pro, you will have the option of using one of their presets for scanned documents that will automatically remove any folds, shadows and other unwanted artifacts from your image.

This tiny little app will save you hours of time in Photoshop cleaning up all your scans. Oh, and did I mention that it's iCloud compatible? This mean, any photo you take with your iPhone will automatically show up on your iPad when it is connected to the internet! Just take the picture of the chart, let Scanner Pro clean it up, and export to your favorite music librarian app using the '˜open in' function. Scanner : Scanner Pro will help you get your physical charts INTO the iPad. Notation, lead sheets, lyric charts - it does it all!

What's that? You don't have a favorite music librarian app? Well, fortunately for you, I do. It's called ForScore. With ForScore, you can catalog your charts with keywords. You can add repeats and cuts to longer scores, and you can create annotations, set lists and categories with ease! You can even send your set lists AND charts to other band members who also have iPads. No more making last minute copies of the night's set on the back of a cocktail napkin. ForScore : ForScore will help you carry around every piece of music that you've ever played. What more could you ask for?

The beauty of using your iPad as a music librarian is revealed over time. As you play gigs and add charts to ForScore, you will begin to amass a huge library of tunes. You'll be able to whip out your iPad at a moment's notice and practice just about anything at any time. If you sub with a band and make a bunch of cheat sheets, you'll have them all archived in case you ever get the call again. ForScore also integrates with the backup portion of iCloud, so you have the security of knowing that even if you lost your iPad (perish the thought!) you don't lose all of your music.

The iPad as a Teacher's Companion

Teaching students music lessons is one of the most popular ways musicians supplement their income. If you have private students and want to both make your planning easier and their lessons more enriching, start integrating your iPad into your teaching routine. You'll be glad you did!

Apps like Tab Toolkit can help guitar teachers import tablature files, play them back like standard MIDI files, create warm-ups, exercises, and generally have access to a library of '˜things to work on' at all times during a lesson. You can also use iTunes Match to have your entire library of songs available to you, regardless of the storage space you have on your iPad. 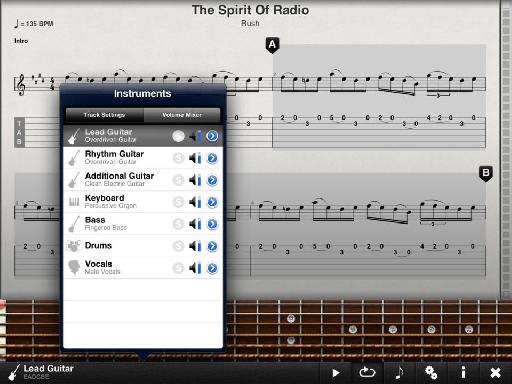 Tab Toolkit : Tab Toolkit lets you load in your own guitar tablature or purchase sheet music for guitar.

Supplementing instruction with audio and video has never been easier. You can use your iPad to record video of proper technique, how to play difficult riffs or patterns, record audio of the entire lesson'¦ The possibilities are endless! Why settle for digging around YouTube for a video that you deem '˜correct' when you can quickly open the camera app, record it yourself and email it to your student with the flick of a finger?

The iPad For The Performing Musician

We've already covered using iTunes Match to have your entire library with you at all times - but what if one of your songs is really giving you trouble? Slowing down the tempo of a song to figure out a tough riff is not new, but it's never been more user friendly than with the iPad and Capo.

Capo is the club date musician's best friend. You can take any song, drop it into Capo and instantly slow down the tempo to learn a tough riff. You can loop a section of that song over and over to practice while slowly speeding up over time. Want to remove the vocal track so you can sing along? Capo does that too. Lead singer in your band can't quite hit the high note in 'Baba O' Riley'? Capo will transpose any audio you throw at it so you can practice the song in the new key. 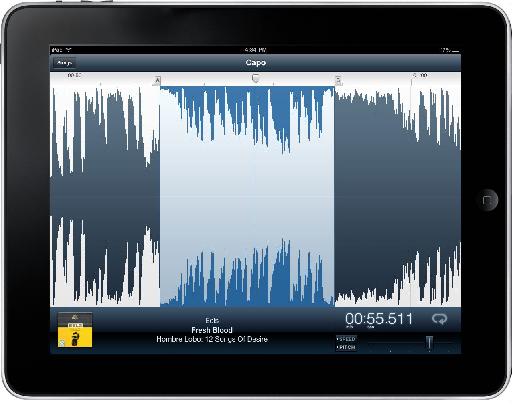 Capo : Capo can change the speed of the music and the key independently.

MusicNotes also has an app presence on the iPad; so it's never been easier to take requests for a tune you don't have in your fingers. You can purchase sheet music and download it over Wi-Fi (or cellular if you have a 4G capable iPad) and be playing a song you've never played before in under a minute.

The iPad of the Future

We've only just entered the era of the tablet. The iPad air is the most powerful mobile device Apple has ever made, and the apps for it are getting more and more robust by the day. We can already control our digital audio workstations (Logic Remote and DP Control are both available now), record on the fly with GarageBand, simulate a Moog synth with Animoog; who knows what we will be doing even a year from now? This is an exciting time, and soon we will be able to do even more with our iPads; if we can somehow tear ourselves away from Angry Birds.