STOCKHOLM, Sweden – June 5, 2019 – Propellerhead Software has released PolyStep Sequencer – an evolved polyphonic step sequencer plugin for your Reason Rack. With this new Rack Extension you can create and jam sequences in totally new ways by drawing in or recording notes and then apply PolyStep Sequencer’s magic tricks. Explore chord progressions and structures by grabbing single notes and dragging them horizontally or vertically to create boxes, which transform into amazing chords, repeats, arpeggios or strumming.

With PolyStep Sequencer you can record in real time, with step input or graphical input. You can easily transpose your sequences in real time from MIDI input, always in scale. Go all in jamming and improvising dynamic arrangements with eight patterns, each with four variations, and switch between them manually, randomly or in sequence. 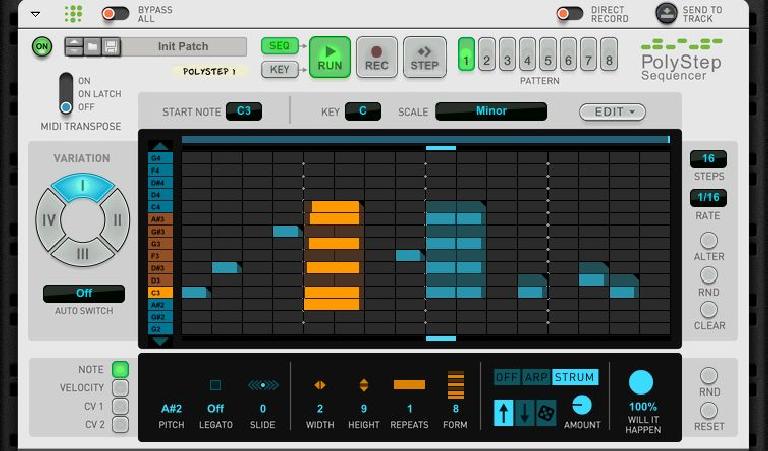 If you are into details, each note has separate properties. Set basic values like pitch and velocity, but also go deeper with probability, timing offset, legato and more. If you have dragged notes in your sequence to create boxes, the properties will allow you to set repeats, chord density and alternate voicings, as well as settings for arpeggio or strum. The scale-aware playback makes sure you get no off-scale notes, unless you want it. You also get two CV tracks to control parameters on the instruments you are playing.

Purchase PolyStep Sequencer is available for immediate download via the Propellerhead store and will retail for 99 USD / EUR.

Dream It. Do It.
Do you want to learn MIDI Recording and Editing?
Yes, I want to learn!
No Thanks, I just want to read the article.
Feedback
How are we doing?
We'd love your thoughts, feedback and questions regarding our new site. All feedback is appreciated!
We do not respond to this form! If you need support, please visit our support page.
Thank you for your input!
Your message has been successfully sent
Course Advisor
Don't Know Where To Start?
Ask A Course Advisor