All Articles Review
Reverb Plugin Shootout
Rich Tozzoli on Tue, May 22nd 0 comments
Reverb plugins, whether they emulate a classic or bring something completely unique, all have their own character. Rich Tozzoli compares five of his favorites to see how they stack up.

I was recently looking at one of my mixes onscreen and realized I was using five different kind of reverbs. With that in mind, I thought it would be interesting to take a look at those various reverbs and hear the same audio clip through them, as well as discuss why you might use different ones in the same session.

The primary reason I turn to multiple kinds of reverbs in the same session is that they are sonically different and offer up a multitude of production options. While the different kinds of reverbs may provide a variety of sounds within the plugin itself, such as plates, rooms, halls, churches and so on, some of them have certain overall characteristics that make them unique. Some of them also just do one thing, and that's what you turn to them specifically for. Also, some of them are convolution reverbs with real samples and some are more traditional. I have found it best to mix and match them in an overall approach to creating depth, height and space in a mix.

To Aux Or Not

I also realized that sometimes I will apply a reverb directly to a track, and use the wet/dry control (if it has one) to create the blend between the dry signal and the effect. There is no right or wrong reason to do so, as opposed to putting the effect on an Aux channel and using a bus send. The only thing is that if you apply it directly to the track, it can be used by that track only. Whereas if you use it on an Aux channel, you can send other tracks to it. It’s simply that sometimes I like the ‘immediacy’ of placing it directly on the track and making it extra wet. It also lets me tailor the sonic setting of the reverb, for example the predelays, EQ, filtering, to be used only with the track its on, instead of having every instrument sent to it have that same reverb character. You could however create multiple instances of the same reverb on different Aux tracks and do the same thing. My rule of thumb is whatever feels and sounds right is right.

For this article I used a synth stab example from a TV drama cue I was working on because it has an immediate attack and an echoed sustain. This lets you hear the impact of each kind of reverb and how the tail and sustain effect the overall sound.

I use the Soundtoys Little Plate, which is a modeled EMT 140 electromechanical reverb, because it offers decay times from half a second up to infinity. It’s got a special sonic ambience that I personally have not found in other plates, and when you turn the Decay time up above 8 seconds, it starts to swim in a very lush and musical way. The minimal controls offered include Decay Time, Wet/Dry Mix control, Low Cut (20 Hz to 1kHz) and Mod, which introduces a slight modulation into the reverb tail.

As you can hear from the example, Little Plate offers a smooth trail and some true sonic character. The initial hit seems to impact the reverb and then push the sound deep into the tail, since I had the decay set to just over 8 seconds. I will often use even more decay time and send such things as piano hits, drum impact sounds and even snare drums into it. It’s truly a classic plate sound and I also use it as a sound design tool for massive reverbs.

I’ve been using Altiverb since it was first released many years ago. One of the first convolution reverbs, it offered up sonic spaces through impulse responses that no other reverb could at the time. It’s easy to use with minimal controls and the Impulse Response library is accessible with a useful visual browser, allowing you to see the photos of the various spaces. There are real acoustic spaces as well as samples of vintage reverb gear, and you can alter the stage positioning and even access a tempo synced gate function. '¨'¨ 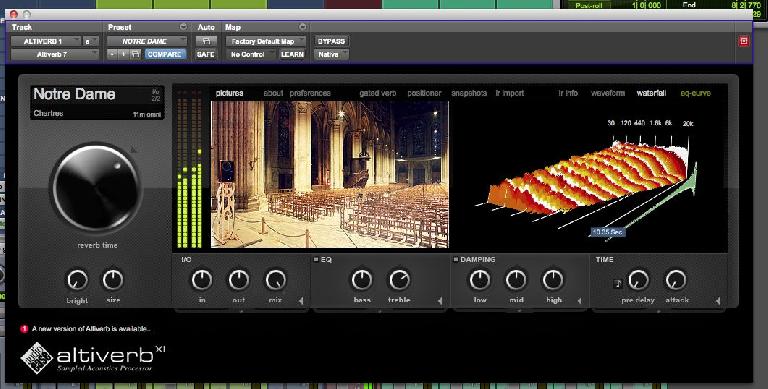 With the synth example, I’ve chosen one of my classic go-to reverb settings, which is the massive Notre Dame Cathedral in Paris, France. With some samples, such as this, it works to turn up the EQ Treble a bit to accentuate the initial impact. You can clearly hear the sample hit the church and sustain backwards, and it seems to add width to the overall sound. Sometimes there's nothing like putting a sound into a real acoustic space. I find this especially applies to string sounds, and when Im using such programs as Vienna or East West symphonic sounds, I will call up settings such as Disney Concert Hall in LA, Filmorchester Studio 1 in Berlin, or Konzerthaus in Vienna, Austria. They provide a sense of reality and depth and each have their own special character. Altiverb 7 is also updateable simply by downloading any of the newest IR releases and importing them into the program.

When it's time for a vintage sonic character with some metallic edges, I will turn to the AMS RMX16 Expanded from Universal Audio. Heard on countless hit records, it was first released back in the 80s and was the first full bandwidth digital reverb. The original hardware, like the software, came with 9 programs such as Ambience, Hall, Plate, Echo, NonLin, Room, Hall, Chorus and Reverse but the Expanded version offers up nine additional programs.

You can hear the edgy impact of the AMS Ambience preset on the synth hit and then the slight echos of the decay. I used a little bit of predelay and I’ve also turned up the Input and Output to get the effect to hit a bit harder. The Nonlin settings in this reverb are my absolute favorite on snare drums, and this reverb gets quite a workout in my studio.

When it comes to creating massive reverbs and atmospheres, I will turn to the Eventide Blackhole. Blackhole features algorithms from their Space Reverb effects pedal and offers over 50 presets to get you started, as well as Modulations, Resonance, and Tempo sync BPM for delay and mod based effects. The example demonstrates how big and wide it can sound, and I’ve turned up the Size knob and increased the Output by 3dB to increase the overall effect. 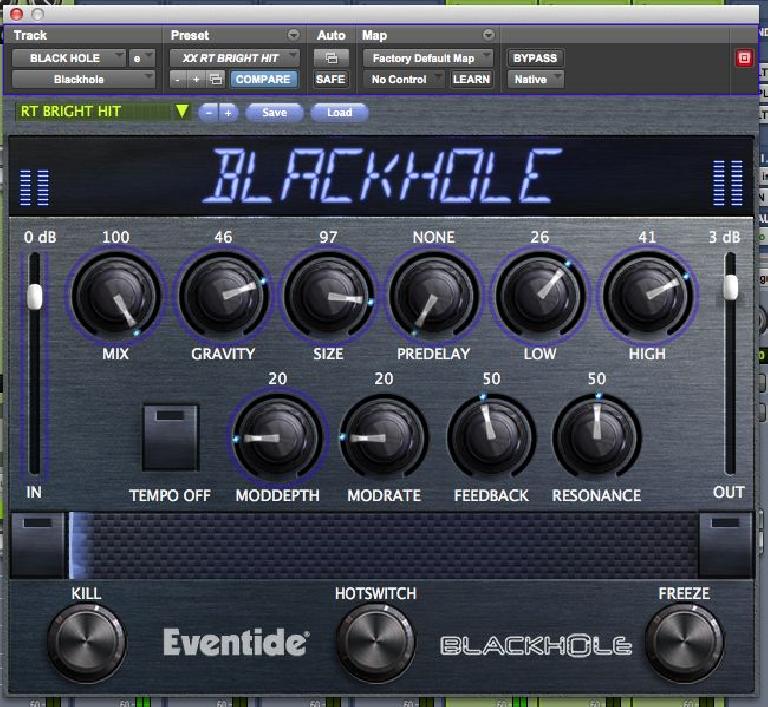 What I like most about Blackhole is its unique sonic flexibility. It can go from massive soundscapes to short unnatural spaces. The Gravity feature inverts the reverbs decay and the Kill switch mutes the reverb so you hear only the reverb itself. I tend to use it on cymbal swells and massive string pads, but it sounds especially powerful on ambient guitar parts since it can swim like few other reverbs.

The Sonnox Reverb features control over Early Reflection and Reverb Tail, as well as a full feature 5-band Oxford EQ section. I tend to use this for bright, short spaces that I can customize with the Reverb Mix slider that lets you blend between the Tail and ER (Early Reflections). 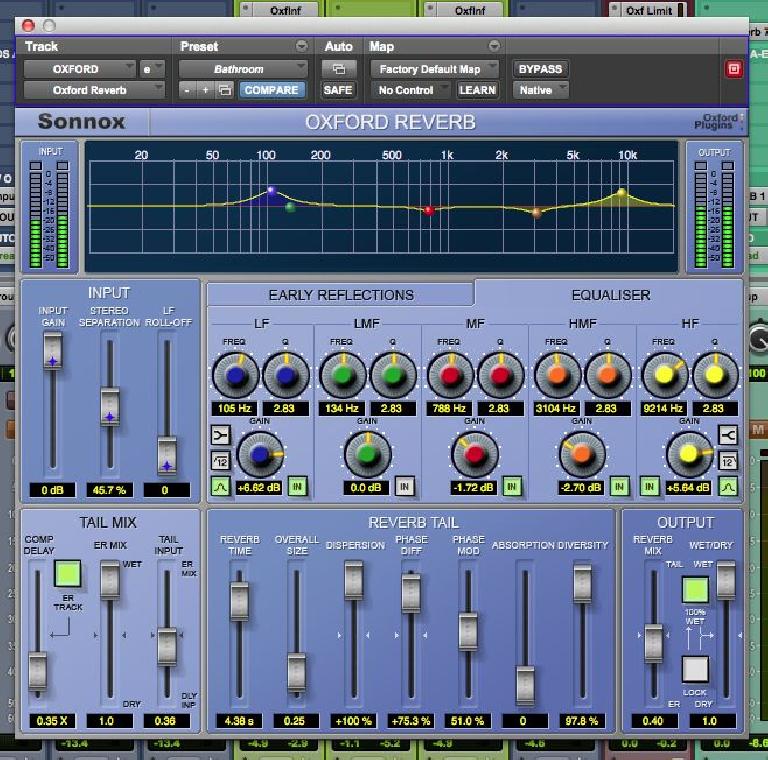 By selecting the EQUALISER tab, you can EQ the sound to fit the sample, and in this case I've pushed up some of the HF around 9kHz and some lows around 100Hz. I’ve also set the Reverb Time to just over 4 seconds and dialed in a bit more ER than TAIL, just to get a short, hard, bright impact on the sample. I’ll use this kind of short reflective sound for acoustic guitars and shakers, but will use more of the tails for things like vocals, keyboards and even sound effects.

Interestingly, stepping back to take a look at my reverb uses made me realize that I tend to rely on the same ones session after session, which can be good for familiarity but bad for creativity. From this exercise, I have decided on my next session to push myself to use some new settings on each and blend in the familiar with the unfamiliar. Take the time to think about what reverbs you use and try to push your own boundaries.

Learn more about FX and mixing in the Ask.Audio Academy: https://ask.audio/academy?nleloc=new-releases
Related