The Hammond B3 organ is one of the most recognizable sounds in the history of music and has never really gone out of fashion. Even when it’s not been too prominent in the pop world, it’s remained a staple of jazz, blues and gospel. It was among the first ‘real’ instruments to be emulated in software form, although early versions didn’t always quite nail the character and unpredictability of a real spinning Leslie speaker. That’s changed and with modern algorithms and sampling, you can get much closer to the real thing.

AIR Music Technology has created the DB-33, a software version of the B3 for Mac and PC, in AU and VST formats on the Mac and VST for Windows. It uses iLok authorization which can be bound either to an iLok USB key or to your computer directly, and setup is very straightforward. Hammond emulations aren’t hugely complex in their design, but the effort has to go into really focusing on the controls and sounds that made the originals so unique.

The main organ screen has five tonewheels to choose from: new, used and dirty are variations on the classic B3 sound, and the two synth tonewheels introduce a more synthesized character to the sound. In the center are eight drawbars and these can be manipulated to change the tonal quality of the sound. As with a real organ, the lower bars control deeper tones and these get higher as you move from left to right. Helpfully, you can right-click on any drawbar and choose to assign a MIDI CC to it and also set min and max values. This is great for assigning hardware faders or drawbars for a more hands-on control of tone. Other controls on the front panel include vibrato, key click and percussion switches, all of which help to tailor the sound anywhere from gentle gospel through to crunchy rock. 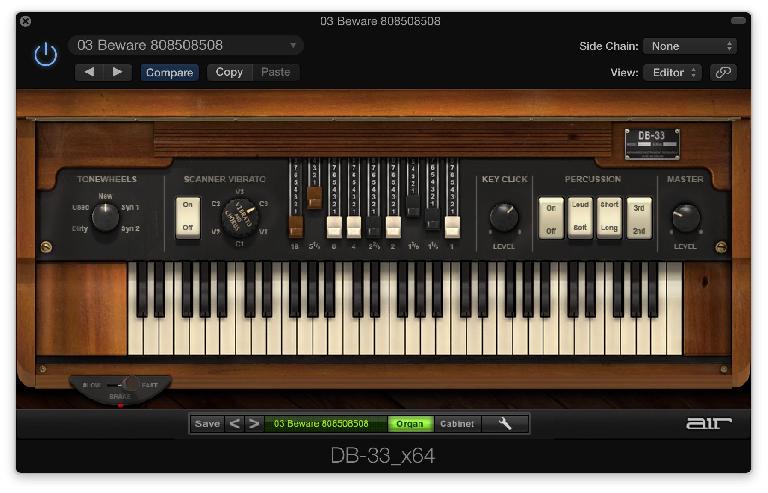 Flip over to the cabinet section and you can control tube amplification and the dry/wet balance of the direct and mic’d signal. Separate virtual mics can be controlled to alter the balance between the drum and horn (the large and small elements of a real Leslie speaker) and there’s a spread control, all of which helps you tailor the tone. Rotary speaker effects need speed controls of course, and these are present and correct in both sections of the instrument. In the cabinet section, there’s additional access to manually set the slow and fast spin rates plus the rate of acceleration and deceleration when you change speeds. The cab module is also available as a separate plug-in for use on any track in a project. 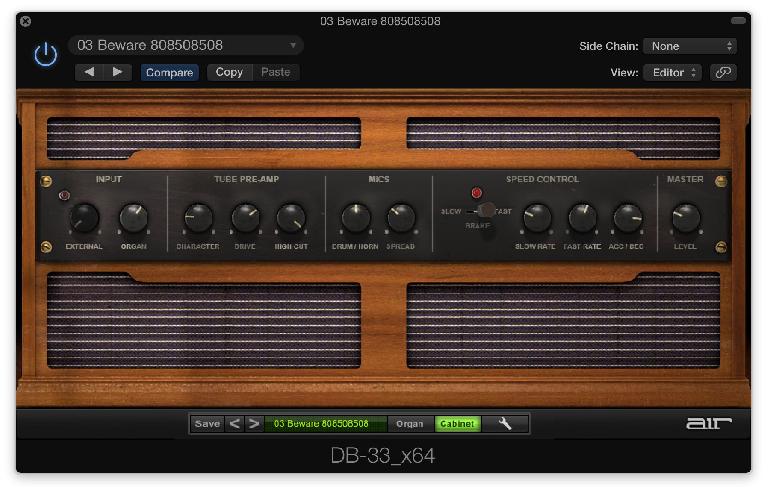 DB-3 sounds great and the presets (which seem to have drawbar positions as part of their names) cover everything from subtlety through to heavy blues and jazz with aplomb. Tweakability is good and the sound can be made rough, warm and clicky or spinning and skittering as required. Few DAWs come with a really good Hammond instrument (Logic Pro being a notable exception) so if you’re after great organ sounds this is definitely one to try out—a free demo is available.

Cons: You may already have Logic Pro with the Vintage B3 provided.